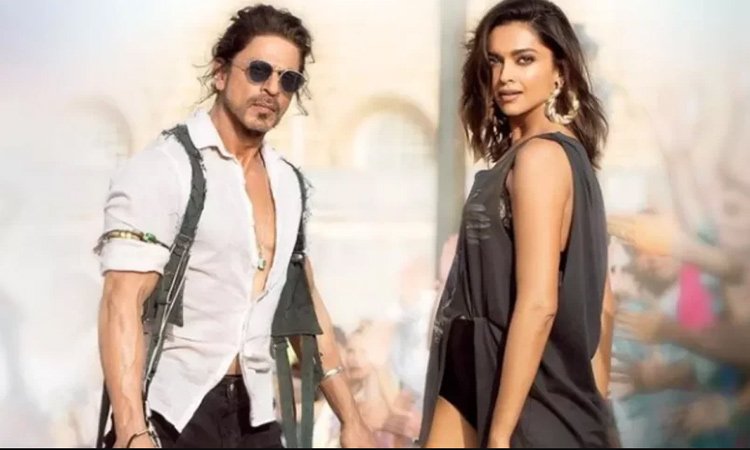 A still from the movie "Pathaan."

Theatres in Bhopal, Indore, Gwalior and many other cities witnessed long queues from early morning as people line up to watch the first show of the film which also stars Deepika Padukone and John Abraham.

However, the right-wing protesters also gathered outside the movie halls against the screening of the movie.

Effigies of Shah Rukh Khan and Deepika Padukone were burnt outside the Rang Mahal Talkies in Bhopal, and after that they sat outside chanting the Hanuman Chalisa.

In Indore, a group of Vishwa Hindu Parishad members armed with sticks protested outside the Sapna Sangeeta Talkies.

However, a heavy contingent of police personnel deployed around the cinema hall controlled the situation and the first show was screened.

In another development, as many as 30 activists were booked for indulging in violence and attempting to stall the screening of 'Pathaan' in theatres of Belagavi district in Karnataka on Wednesday.

The activists stormed Swaroopa and Narthaki theatres and tore the posters of the movie. They had condemned the release of the movie despite the boycott call and tore down banners. Security has been tightened in the surrounding areas of the theatres.

Khadebazar police in Belagavi have registered a case against 30 activists and detained a few.

The police department has also deployed a platoon of the Karnataka State Reserve Police (KSRP) near theatres. Belagavi South constituency BJP MLA Abhay Patil condemned the release of the movie and urged to stop exhibition of the movie.

"They should understand the feelings of the people and stop the screening of the film. Release of such movies will spoil the atmosphere in the society. The protest has begun today. Women are opposing the release of the movie, the distributor must stop shows," he said.

'Pathaan' has been released across the state and is being screened without any trouble in other regions, including the capital Bengaluru.