David Crosby – co-founder of Crosby, Stills and Nash – dies a day after tweet on heaven - GulfToday

David Crosby – co-founder of Crosby, Stills and Nash – dies a day after tweet on heaven 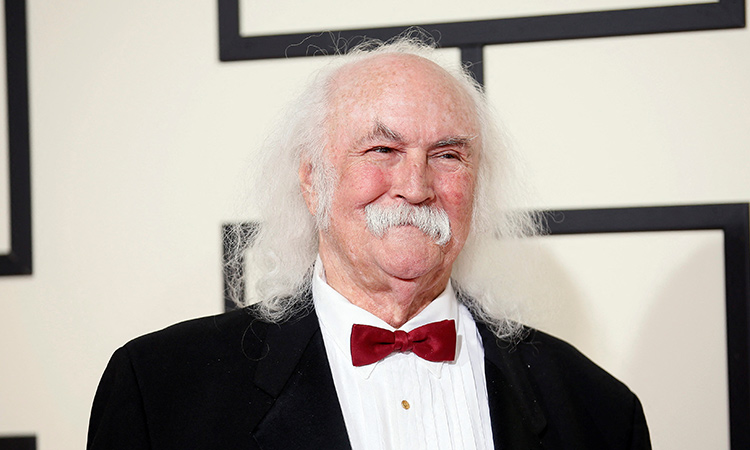 Singer-songwriter-guitarist David Crosby, a founding member of two popular and enormously influential 1960s rock acts, the Byrds and Crosby, Stills & Nash (later Crosby, Stills, Nash & Young), has died, 'Variety' reports, quoting his representative. He was 81 years old. A cause of death has not been revealed.

The death came as a surprise to those who followed his very active Twitter account, which he'd kept tweeting on as recently as Wednesday. One of Crosby's final tweets the day before he died was to make a typically jocular comment about heaven: "I heard the place is overrated ... cloudy," according to IANS.

Former CSNY partner Graham Nash, who had been estranged from Crosby in recent years as their group went its separate ways, paid tribute on his social media, reports 'Variety'.

Nash wrote: "I know people tend to focus on how volatile our relationship has been at times, but what has always mattered to David and me more than anything was the pure joy of the music we created together, the sound we discovered with one another, and the deep friendship we shared over all these many long years."

In recent years, as CSNY had seemed irrevocably split up, it was clear that what Crosby had wanted most of all was to reconcile with those bandmates. That was not to be, but Stephen Stills said in his own statement on Thursday night that their relationship had ended peacefully, notes 'Variety'.

Wrote Stills, across a series of tweets: "David and I butted heads a lot over time, but they were mostly glancing blows, yet still left us numb skulls. I was happy to be at peace with him. He was without question a giant of a musician, and his harmonic sensibilities were nothing short of genius. The glue that held us together as our vocals soared, like Icarus, towards the sun."

While never the principal songwriter in either the Byrds or CSNY, Crosby was an integral part of the densely layered harmony front line that launched both those acts' multiple chart hits, according to 'Variety'.

The hedonistic personification of the 1960s sex-drugs-and-rock 'n' roll lifestyle, he grappled with addiction for many years. His sensational 1982 arrest in Texas on drug and weapons charges led to a five-month prison stay in 1986. Wracked by years of cocaine and alcohol abuse, he underwent liver transplant surgery in 1994.