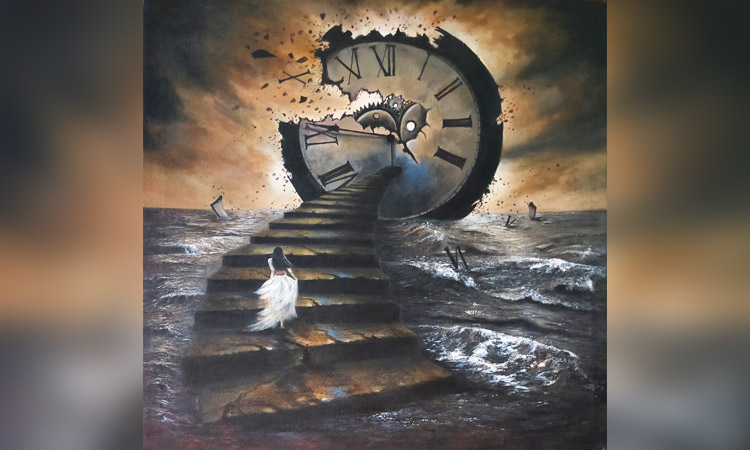 Artist Khadiza's presentation at the show.

Funun Arts group along with Mahfuz Canvas of Bangladesh organised “Bijoy,” an artistic celebration of the 51st Victory Day of Bangladesh on December 12 at Dubai International Art Centre, Dubai. “Bijoy in the Bangla language means “victory” and the exhibition brought artists from Bangladesh to UAE as part of the celebration,” says Shiba Khan, Co-Founder, Funun Arts. “It is a remarkable milestone in the artistic journey of Funun.” “Bijoy” is the biggest and the first-ever art event organised by Bangladeshi artists overseas. Original artworks from self-taught Bangladeshi artists were brought and displayed in the UAE.

“This exhibition proclaimed the message of tolerance and unity with which nations shall build a safe and secure future for their coming generations,” said Farah Khan, Co-Founder of Funun Arts.”The event was a declaration of victory over all those barriers that divide humanity and was a celebration of unity.” According to her, “there is no other land that can host such a union as UAE as this is the land of tolerance where people from different parts of the world live in harmony and peace.”

“Art is beyond all boundaries, and we are using art to bring people together in this wonderful land,” added Shiba Khan. “Bijoy” featured sixty original artworks from Bangladesh. Most of the artists visited UAE as part of the exhibition and others sent their artworks to be exhibited. Artists from twenty nationalities, who are residents of the UAE, also joined them in exhibiting pieces on the themes of love, peace, harmony, and togetherness. “Art also translates as love. “Bijoy” spoke the language of love and provided the greatest opportunity to speak of the love for the land, love for humanity, and love for the people through the artistic language our artists. 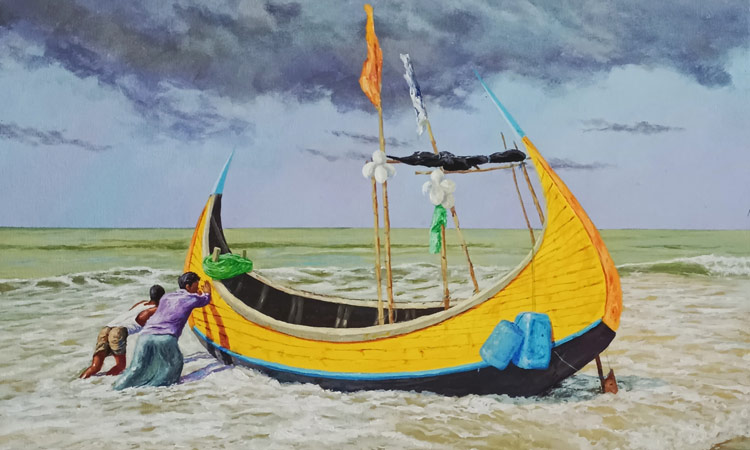 Hence, this exhibition was significant in many ways,” Shiba Khan further noted. The Consul General of the People’s Republic of Bangladesh in Dubai, B.M. Jamal Hossain, inaugurated the event which was graced by the presence of many eminent personalities of the UAE. The Consul General appreciated Funun Arts and Mahfuz Canvas for undertaking the venture and said that it marked the beginning of a new era where art, ideologies, and perspectives, merge in creating a better world for posterity. He also expressed his gratitude to the title sponsor — PowerPac — for supporting the show.

He said that he himself was a self-taught artist who preferred Expressionism in art. He likes to work in pen and paper. He thanked all nationalities who also joined the celebrations. PowerPac (a concern of Sikder Group) was the title sponsor of the event. The Chairman of PowerPac is Rick Haque Sikder and the Managing Director is Ron Haque Sikder. Ron said that the exhibition, with a specific focus on encouraging artists to improve their creations by giving them a global platform and encouraging them to honour different cultures, made a nation proud.

PowerPac is one of the largest business conglomerates based in Bangladesh; it has over 70 business ventures around the globe and the Founder of Sikder Group, Zainul Haque Sikder, was a freedom fighter and a close companion of the Father of the Bangladesh Nation, Bangabandhu Sheikh Mujibur Rahman. A project in Bangladesh — the “Bangabandhu Tri-Tower” at Central Business District (CBD) area at Sector 19 of Purbachal New Township project in Dhaka, which is being developed by PowerPac — was displayed during the inauguration. 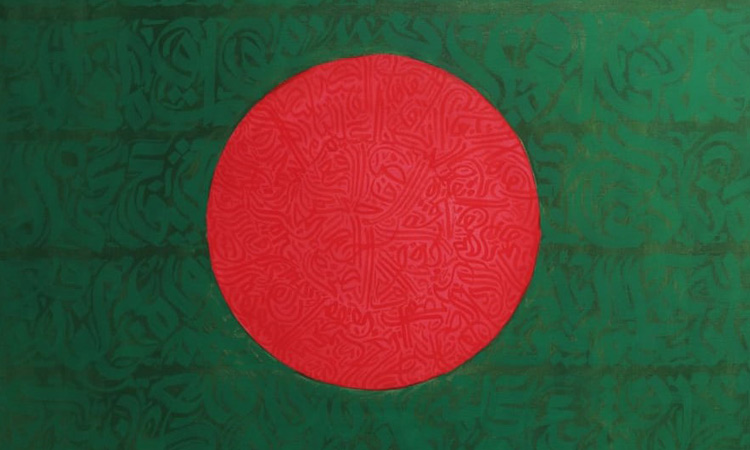 Enthused by the colourful vibrancy of the inaugural, Farah Khan said that “every event we organise should be unique in one way or another. We are very keen about making them unforgettable experiences, both for our artists as well as guests. We value and foreground the uniqueness of every land and every culture. “Bijoy” was a blend of many cultures, and it was definitely a beautiful experience.” Legendary artist Ahmad Al Awadhi expressed his delight in the concept behind the show and said that it was the need of the hour. “The world needs to learn the language of love again as it is forgotten in humanity’s race for possessions,” he said.

“Initiatives like “Bijoy” remind us that art can be a powerful tool in reminding us about those forgotten values. I appreciate Funun Arts and Mahfuz Canvas and offer wholehearted support in this noble venture.” Maitha Alblooshi, CTO Scrum Master at Emirates NBD and an Emirati motivational speaker, said that “this is a wonderful evening where we can see the artists from different nationalities together.” Funun Arts has been organising similar events for a decade and are known for connecting nationalities across the world through art. Their motto is that “coming together is success, working together is progress”.

Funun Arts started its journey with six artists and now they are a team of 600 artists from more than 50 countries in the world. The efforts of the Khan sisters have been praised by many and both Shiba Khan and Farah Khan have been honoured with the Golden Visa. Their art events are complemented by exhibitions, art talks, panel discussions and competitions, among others. For Mahfuz Canvas, “Bijoy” has been the first and largest overseas art exhibition.

Mahfuzur Rahman, Founder of Mahfuz Canvas, said that this endeavour was their greatest international achievement yet.The legacy promoted by Sheikh Zayed has made the UAE an oasis of tolerance, pluralism and diversity, where people can see themselves as parties of a bigger universe.