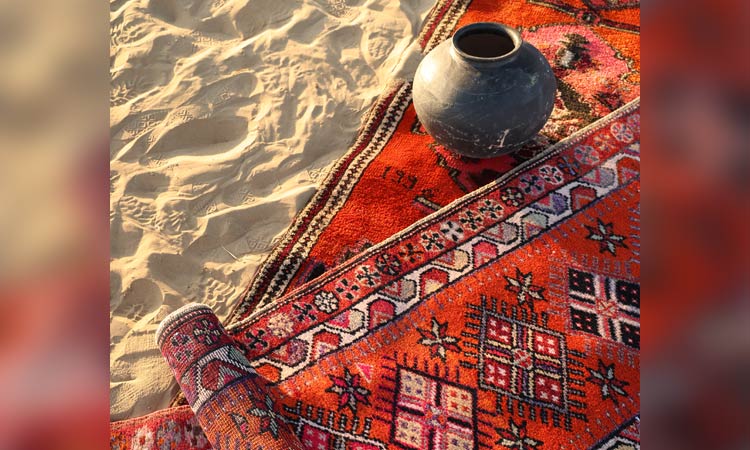 Rug samples from the Nuray Collection.

Leading rug manufacturer, India based Jaipur Rugs, has unveiled Nuray – a new collection of over 300 unique designs, which takes cues from ancient Kilim carpets.Traditionally produced in the countries of the former Persian Empire, the flat-woven tapestries are known for their brightly-hued patterns and pileless textures.

Kilim, a word of Turkish origin, denotes a pileless rug of many uses produced by one of several flatweaving techniques that have a common or closely related heritage and are practiced in the geographical area that includes parts of Turkey (Anatolia and Thrace), North Africa, the Balkans, the Caucasus, Iran, Afghanistan, Pakistan, Central Asia and China. Nuray, which is the Turkish word for ‘Bright’, aims to reimagine the Kilim form with creativity and contemporary flair.

Combining time-honoured tribal motifs – including intricate floral elements and geometric shapes – with a vibrant colour palette, the Nuray pieces are hand-knotted in India from the finest wool. Wool is the primary and often the only material used to make a Kilim rug. Many Kilims are made totally from wool and the popularity of wool is due to its inherent qualities. It is supple, durable, handles easily when spun or woven, readily takes on dyes and, most important, is in plentiful supply in Kilim-making regions. 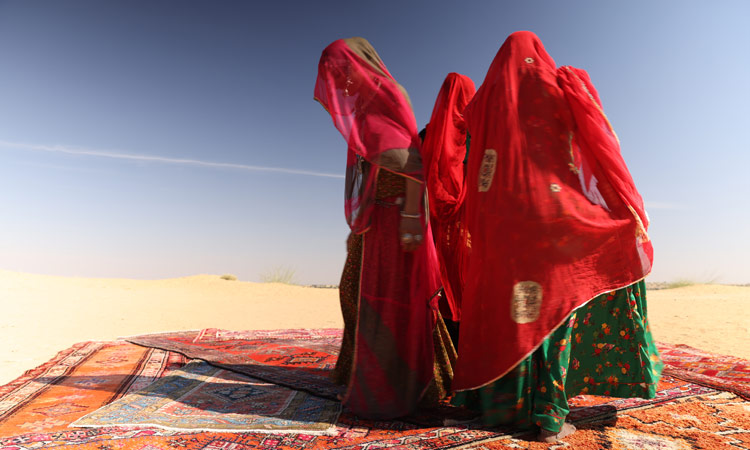 Feeling out the Nuray Collection.

There are certain breeds of sheep, like the merino, whose fleece is especially sought-after for its special lustre and length of fibre; but actually it’s the domestic fat-tailed sheep bred with its favourable climatic and grazing conditions, that provides much of the fleece used in Kilims. In the 16th century, artisans working in the Jaipur area (in the Rajasthan State of Northwest India) adopted Persian weaving techniques and reinterpreted them according to their own creativity.

A unique style of carpet weaving was born. Jaipur Rugs is a family-owned company founded in 1978 by globally-acclaimed social entrepreneur, Nand Kishore Chaudhary. Often referred to as the ‘Gandhi of the Carpet Industry’, Chaudhary revolutionised the industry by creating an entirely new business model: working directly with artisans to empower them and their communities and creating sustainable livelihoods.

Starting four decades ago as a small atelier with nine craftspeople weaving on just two looms, the global social enterprise has grown substantially, now employing 40,000 artisans – of which 85 per cent are women – in 600 remote villages across five States in India, and exporting to over 80 countries. Headquartered in Jaipur, the capital of Rajasthan, Jaipur Rugs bring together 2,500 years of weaving tradition with state-of-the-art design and exceptional manufacturing. Chaudhary grew up in a small town in Rajasthan.

After graduating from the University of Rajasthan, he began his career in his family’s shoe shop. However, he wanted to do something on his own, and heard that high quality rug weaving was in demand. His early entrepreneurial drive ultimately led him to Jaipur, to pursue a business career in the rug export business. He bought two looms and installed them in his home - and fell in love with the weaving business. He quickly learned the technical aspects of weaving from local weavers and expanded his business. It was at age 11 that he also knew he would do something unique for society, beyond just working in business.

However, at that time he had no idea about the role his business would play for his eventual numerous direct and indirect employees, and for the rest of Indian society. Chaudhary’s philosophy about what successful businesses means for society evolved over the years, and includes empowering others, promoting entrepreneurship, and constant learning. As he has said: there is a need to transfer more and more ownership to the grassroots level. In 2012, the Artisan Originals (Manchaha or Cherished) initiative was launched.

The Manchaha collection was a first of its kind initiative where weavers would design the rugs themselves. It went on to win multiple awards and gained recognition worldwide. It also paved the way for the Freedom Manchaha collection, which was started to provide respectable work to prison inmates in the jails of Rajasthan.

Manchaha is a sustainable initiative where long-term prisoners in Jaipur, Bikaner and Dausa (Rajasthan districts) jails, get to design their own rugs spontaneously on the loom. A section of society condemned as failures are transformed through income and self-expression, to heal and spark change in their lives. Chaudhary started exporting rugs in 1986. Export firm Jaipur Rugs was registered in 2006. By 2008, it was the largest manufacturer and exporter of Indian hand knotted rugs, with fiscal year revenue of USD21.1 million.

Today, Jaipur Rugs is one of India’s largest manufacturers of hand knotted rugs. It also has a large distribution base in Atlanta, Georgia, United States. The story of Indian rugs begins in the 16th century, when Mughal Emperor Akbar took over the reins in India. To add some glamour to the palace, Akbar brought to Agra, the capital, a few best carpet weavers from Persia.

Thanks to their expertise, the Persian craftsmen were able to start the weaving industry in India, practically from scratch. They helped to set up workshops for local people and arrange weaving areas in Agra, Delhi and Lahore. That was just the beginning. Akbar went on to organise weaving training for prisoners in Agra jails. This was not only a practical, but also a deeply humane approach. From common criminals, inmates became artisans. Some of them even outgrew their teachers!