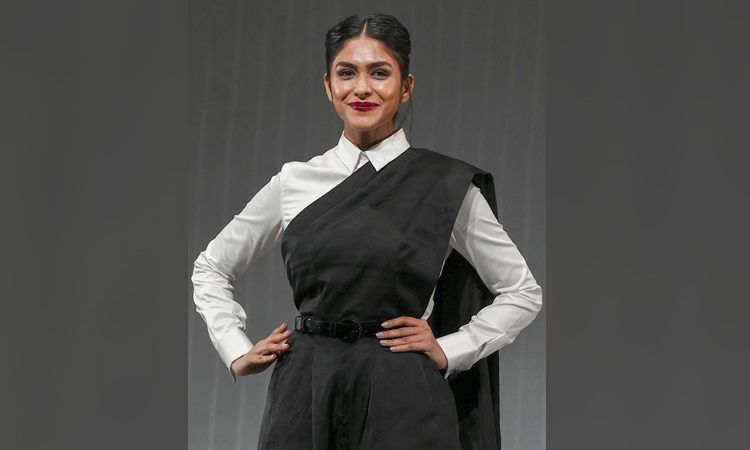 Actress Mrunal Thakur, who made her Telugu debut opposite Dulquer Salmaan with “Sita Ramam,” shares that she has had quite an amazing year and it will be always special to her. The actress is filled with gratitude. Mrunal, who started her career with television, has progressed to the silver screen and has delivered films like “Dhamaka,” “Jersey,” “Batla House” and is currently looking forward to the much-anticipated, “Pippa.”

Summing up her year, Mrunal said: “I have had an amazing 2022 and this year is always going to be special to me. There are some amazing projects lined up that are coming up next year. Now I am looking forward to ‘Pippa’, which makes me so happy being associated with. It’s been a satisfying year for me.” “Pippa” also stars Ishaan Khatter and is based on the Battle of Garibpur that was fought during the India-Pakistan War of 1971.

She further mentioned: “It’s just gratitude that I am feeling right now for the love I am receiving. Most importantly, I have grown so much as an actor because of being part of movies which are vastly different from each other.” The actress also has “Pooja Meri Jaan,” which is about a girl named Pooja who is being stalked by an unidentified admirer of hers.

In addition, she has the family comedy film “Aankh Micholi” with Abhimanyu Dasani, “Lust Stories 2” and “Gumraah” with Aditya Roy Kapur where she will be seen playing a cop for the first time, lined up for next year. Meanwhile, Mrunal has received unanimous praise for her work in the film “Sita Ramam.” But, not everything on the film set was a smooth sail for the actress. She had to learn a new language and emote in a completely alien territory. But, what kept her going was the reward of playing a “beautifully written character” of Sita Mahalakshmi, who is revealed to be princess Noor Jahan in the movie.

Elaborating on the same, the actress said: “Being part of an enigmatic story was the biggest lucrative reason for me to be part of Sita Ramam. Despite whatever small hurdles that I had to adapt to and learn from, I was so elated to be part of this film. Learning a new language seemed like a small hike in exchange for this beautifully written character by Hanu sir.”

The other reward for her was to share the screen with an actor like Dulquer Salman: “To be with such an incredible team and working alongside Dulquer was rewarding, to see what an impeccable performer he is. I knew we were making something special, and that elevated with the warm and tremendous welcome you got for my Telugu debut.”

After its successful theatrical run and dropping on Prime Video, “Sita Ramam” was released in Hindi on OTT platform Disney+ Hotstar on Nov.18, 2022. She began her acting career with the television soaps “Mujhse Kuchh Kehti...Yeh Khamoshiyaan” (2012) and “Kumkum Bhagya” (2014–2016). Mrunal made her Hindi film debut with “Love Sonia” (2018).