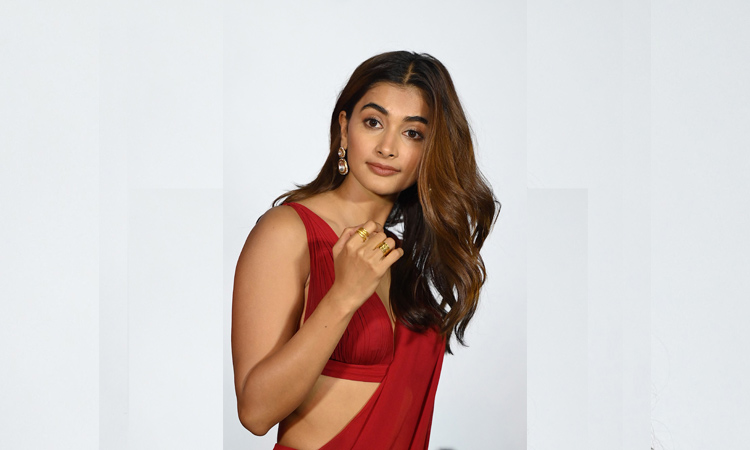 Pooja Hegde poses for pictures during the trailer launch of ‘Cirkus’ in Mumbai on Dec.2, 2022. AFP

Actress Pooja Hegde, who is currently awaiting the release of her upcoming comedy movie “Cirkus,” has shared that the film and her co-actors made her feel at home. The actress can be seen decked up in the 1960s-era Bollywood fashion in the trailer of the movie which was released recently.

The actress shared that the film will bring much respite to the already struggling Hindi film industry which didn’t have a great run at the box-office this year. “Cirkus” is directed by Rohit Shetty, who has an excellent track record at the box-office. She said, “’Cirkus’ is the ideal film to round up this stunning year.

It is an out-and-out family entertainer. I always looked forward to going back the following day since Ranveer, Rohit Sir and the entire cast were so hilarious and humble on set.”

She further mentioned, “This has been a family production in a way. Even though I was a new entrant I just felt at home. This movie is extremely special to all of us. It is from our hearts to yours.” “Cirkus” also stars Ranveer Singh, Johnny Lever, Jacqueline Fernandez, Varun Sharma, Sanjay Mishra, Tiku Talsania, Vrajesh Hirjee, Siddharth Jadhav, and Ashwini Kalsekar.

The film is scheduled to hit the screens on Dec.23, 2022. Meanwhile, Pooja also has “Kisi Ka Bhai Kisi Ki Jaan” in the pipeline in which she stars opposite Salman Khan, and the tentatively titled “SSMB28” opposite Telugu superstar Mahesh Babu. The makers of Rohit Shetty’s upcoming movie ‘Cirkus’ unveiled its teaser on Monday. The film marks Ranveer Singh’s third collaboration with the superstar Bollywood director Rohit Shetty after “Simmba” and the Akshay Kumar-starrer “Sooryavanshi,” where he had an extended cameo appearance.

The film is an important one for Ranveer as his last two films – “83” and “Jayeshbhai Jordaar” -- did not perform well in the box office. Also on Ranveer’s plate is the Karan Johar directorial “Rocky Aur Rani Ki Prem Kahani” in which he will share the screen with Dharmendra, his ‘Gully Boy’ co-star Alia Bhatt, Jaya Bachchan and Shabana Azmi.

With on point one-liners and top-notch acting skills, the trailer of Rohit Shetty’s “Cirkus” doubles up on being the complete package and promises to be a laugh riot.

The makers of the film on Friday launched the trailer, which gave a glimpse into the hilariously confused world of “Cirkus.” The over three minutes long trailer begins with Ranveer, who is known as an electric man and works in a circus. He and Varun Sharma are dealing with doppelganger issues. The “Cirkus” world is set in the 1960s.

It also gives a glimpse of the electrifying song “Current laga re.” There is a surprise element of Deepika Padukone being a part of it . One line that can leave people in splits is: “Log Bade hoker actor bante hai, inspector bante hai, contractor bante hai... tu generator ban gaya.” The trailer has multiple Golmaal references as it features the characters Gopal, Madhav, Laxman and Lucky as orphans.