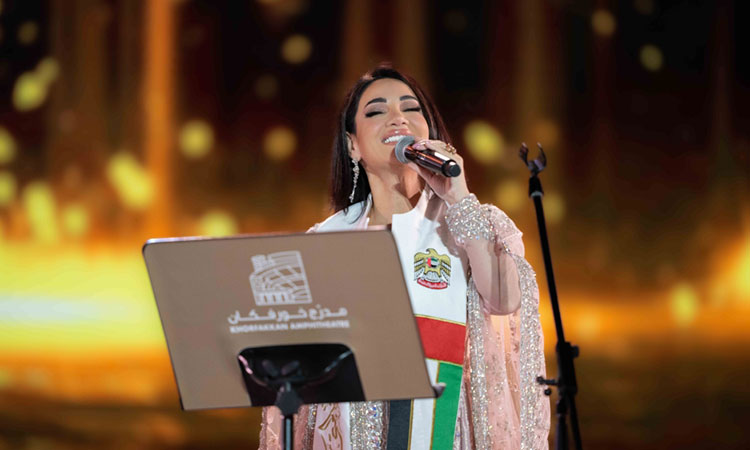 Popular Arab singers Eida Al-Menhali and Diana Haddad on Saturday night gifted an unforgettable experience for music lovers and their thousands of fans in the UAE at the Khorfakkan Amphitheatre, organised by the Emirate of Sharjah Committee celebrating UAE National Day.

The two stars turned the special concert marking the 51st National Day into a night to remember as they sang a number of popular patriotic songs in celebration of the UAE, expressing the pride and joy on the remarkable achievements of the nation.

The evening kicked off with the star Diana Haddad, who sang some of her popular hits that strengthen and rekindle the spirit of belonging and loyalty to the nation.

The audience lapped up each of her offerings often supporting and singing with her. She won over the hearts of her audience when she sang "The Loyal Hawks" dedicated to the brave UAE forces.

The joy and enthusiasm of the audience intensified further when young Emirati singer Eida Al Menhali took the stage. The artist cast a spell on his audience with the novelty of his melody and creativity as he paid rich tributes to his country and all that it has achieved in the shortest period of time. 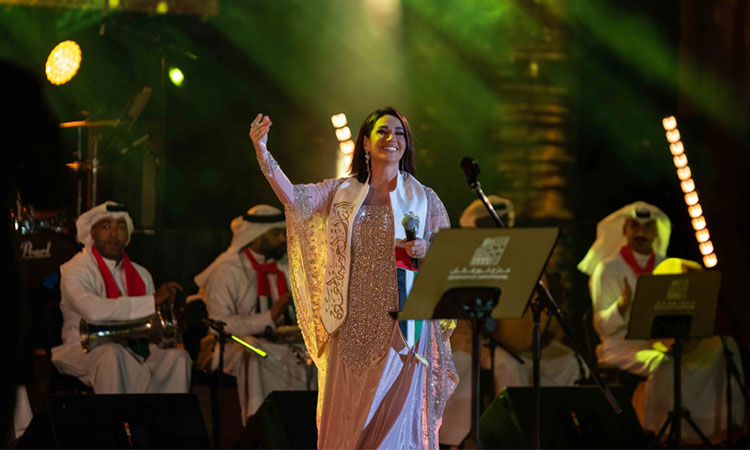 The two artists expressed their joy and pride over participating in the National Day celebrations in the beautiful city of Khorfakkan, the Bride of the East Coast, and at a fabulous venue such as the Khorfakkan Amphitheatre, which has over the past few months and weeks has hosted a number of artistic and cultural activities.

Diana Haddad, known as the voice of the mountains, took the audience to the 1990s and early 2000s with her distinctive singing style and recreating the magic of songs such as “Saken”, “Mas and Loli” and “If They Ask Me”. She also sang "Basik Tiji Haretna" by the veteran artist Samira Tawfik. She sang many of her popular numbers in various Arabic dialects, which are included in her new album, "Diana Haddad 2022", including the song "I Wahshni."

Eida Al Menhali regaled the audience with his powerful voice, as he sang of the proud artistic and cultural heritage of the UAE. The artist is known for songs such as "Azl Alaik," and numerous others. The audience also loved his latest work, "Blood for Blood", in addition to the song "to Meet You."

The proceeds of the special Khorfakkan concert will be donated to the Big Heart Foundation to support its global humanitarian efforts in aid of refugees and other vulnerable groups around the world.