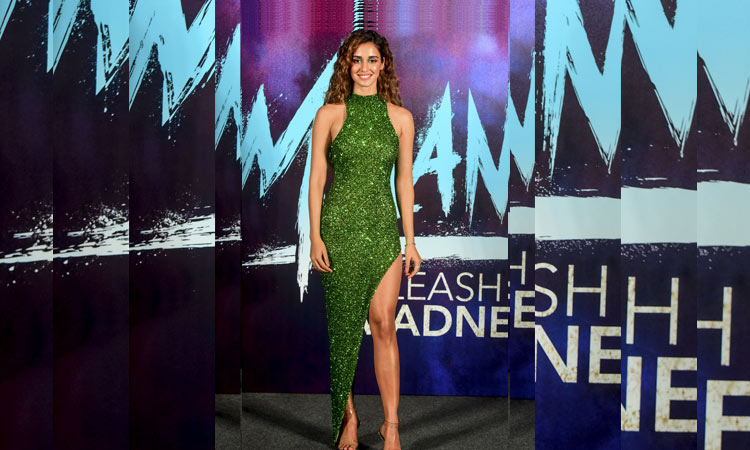 Disha Patani poses during the trailer launch of ‘Malang’ in Mumbai on Jan.6, 2020. AFP

Actress Disha Patani is known for setting the social media on fire with her sensuous pictures. Keeping up with the practice, the actress again shared a picture on her social media on Tuesday in which she is wearing bathrobe. But, what caught the attention of the netizens is Tiger Shroff’s sister Krishna Shroff’s comment on Disha’s picture.

Disha shared the mirror selfie in which she can be seen standing close to a jacuzzi and holding a piece of fully loaded dessert. Stressing upon the importance of carbohydrates in a balanced diet, the actress wrote in the caption, “Eat your carbs”. Krishna took to the comments section and wrote, “Yes Ma’am”, and the netizens are having a field day.

One user wrote, “Ye pakka Tiger bhai hain, Krishna ki ID se (This surely is Tiger Shroff operating Krishna’s ID to comment on the picture)” Another one wrote insisting Krishna to address Disha as her sister-in-law, “bhabhi boliye”. For the uninitiated, Tiger and Disha were rumoured to be dating however, none of them made it official or spoke about their equation on a public platform.

In August this year, it was also speculated that the two called it quits over Tiger’s obsession with his career and fitness. Disha debuted with a Telugu film, “Loafer” alongside Varun Tej in 2015. In the following year, Disha appeared in a music video, “Befikra” along with Tiger Shroff which was produced by Bhushan Kumar and Krishan Kumar under T-Series and composed by Meet Bros.

Written and directed by Meet Bros, the singer, Aditi Singh Sharma lent her voice. Patani found her commercial break with Neeraj Pandey’s “M.S. Dhoni: The Untold Story,” a biographical sports film based on the life story of MS Dhoni, the former captain of the Indian Cricket Team along with Sushant Singh Rajput and Kiara Advani. She played the role of Priyanka Jha, the girlfriend of MS Dhoni’s character who dies in a car accident.

Directed by Neeraj Pandey and produced by Fox Star Studios, the film was released on 30 September 2016 and was a massive hit. In addition, she also starred in Jackie Chan’s “Kung Fu Yoga,” along with Sonu Sood. Disha then acted in “Baaghi 2” along with Tiger Shroff, a sequel to the 2016 hit “Baaghi” starring Tiger Shroff and Shraddha Kapoor and the second installment in Baaghi franchise.

In June 2019, she appeared in the film “Bharat” starring Salman Khan and Katrina Kaif. Patani was seen as one of his leading ladies in an extended cameo appearance. The film was commercially successful. She started 2020 with February release “Malang” opposite Aditya Roy Kapur.

In March 2020, she appeared in a song in the film “Baaghi 3” starring Tiger Shroff and Shraddha Kapoor, the third installment in Baaghi franchise. She next appeared in Prabhu Deva’s action film “Radhe,” in which she reunited with Salman Khan this time as his leading ladies.