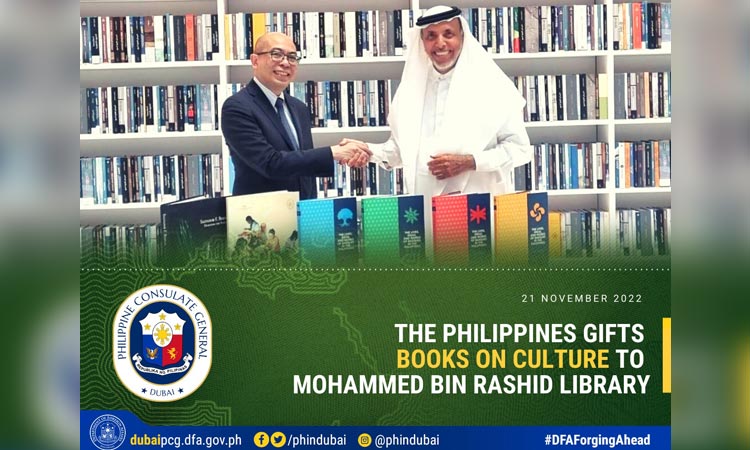 More books on Philippine culture will now be available for reading at the Mohammed Bin Rashid (MBR) Library as the Philippines gifted several titles through the initiative of the Philippine Embassy in Abu Dhabi and conveyed by the Philippine Consulate General in Dubai and the Northern Emirates.

Consul General Renato N. Dueñas, Jr. presented the books to Dr. Mohammed Salem Al Mazrouei, Executive Director of the MBR Library in a simple handover ceremony. Prior to the event, Dr. Al Mazrouei gave Consul General Dueñas a tour of the Treasures of the Library exhibition where a collection of rare books, manuscripts, maps, and documents from all over the world dating back to the 13th century are displayed.

The books include titles such as “Kain Na! An Illustrated Guide to Philippine Food,” “Manila: History, Culture, and Heritage,” and “Journey of a Thousand Shuttles: The Philippine Weave,” which give readers an insight on the rich cultural heritage of the Philippines. “We are proud to donate this small collection of books on Philippine history and culture to Mohammed Bin Rashid Library.

We hope this collection would contribute to greater mutual understanding between the Philippines and the UAE and other nations as well,” said Consul General Dueñas. Dr. Al Mazrouei expressed gratitude for the contribution of the Philippines to the MBR Library. The MBR Library, which opened to the public in June this year, with more than 54,000 square metres and nine thematic libraries, is home to more than one million physical and digital titles in over 30 languages.

Moreover, the library also functions as a cultural centre as it also has an indoor and outdoor amphitheatre, a literary museum, a conference centre, a cafe, and a gift shop. Through the Philippine Partnership Circle that is affiliated with the Philippine Embassy, Filipino authors in the UAE have also shared copies of their books on various topics through the library.