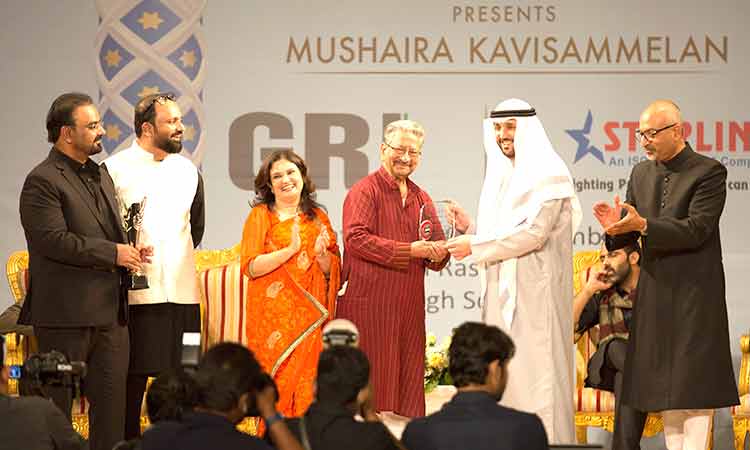 Andaaz-E-Bayaan Aur event, which hosts Mushaira-Kavi Sammelans (the joint presentation of Urdu  and Hindi poetry, two poetic forms which have their homes in South Asia) created its customary magic recently at the Sheikh Rashid Auditorium, The Indian High School, Dubai (Sept. 10), when it hosted Urdu and Hindi poets.

Managed by Classic Concepts, Andaaz-E-Bayaan Aur held two events earlier this year; the recent one was yet another cherished evening for lovers of Urdu and Hindi poetry. The Chief Guest was Suhail Mohammed Al Zarooni and the programme was organised by the team of Shazia Kidwai, Rehan Siddiqui and Urfi Kidwai.

“Our objective,” says Kidwai, “is to promote Urdu and Hindi languages and present the rich culture and heritage of the sub- continent.”

MBRL welcomes delegations and prominent achievers to its spaces

Promoting upcoming and promising talents — Amritanshu Sharma, who was selected from 1,000 entries across India, was the young talent from India this time.

How many years have you and your colleagues been organising this event?

For more than a decade! Since 2009, we have organised 17 events in total. 13 of them were in Dubai; two in Lucknow, India; one Talent Hunt was also held in Lucknow, besides a virtual event during Covid.

How did you become attracted to Hindi-Urdu poetry?

I come from a literary background. I write, too. My parents and grandparents were very much inclined towards literature. My ammi (mother) had memorised so many couplets, that she could use them to fit the right situation. As a child, I always admired her love for poetry.

How has the audience response been to Andaaz-E-Bayaan Aur all this time?

Andaaz-E-Bayaan Aur has established very strong bonds with both live audiences and virtual viewers through digital media. Our Facebook page has 1.3 million followers. We have built up a unique community of poetry lovers through the FB platform! 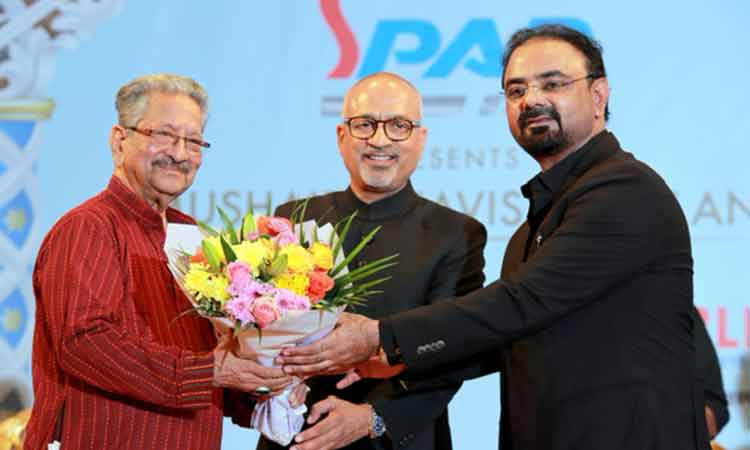 What is the link or links between Urdu and Hindi?

They are the common languages of North India and are considered sisters. Their commingling has resulted in the ‘Ganga Jamuna tehzeeb’ or Hindu-Persianate culture, symbolised by two major rivers, Ganga and Jamuna.

Do Urdu and Hindi poets have different sensibilities? Are their subjects different?

It’s all the same regarding both of them; nothing is different. Their writing is love and romance related. Both of them also write on self-realisation and introspection; they pen nationalist poetry of love for the country, connecting with the masses.

There is a feeling that Urdu poetry — and the very language — is on the decline. Do you think so?

Yes, I think so. That’s why we have to work for such events more passionately. We should have more support, more sponsors who participate. Such grand events require grand funds to execute! The cost of everything has gone up; so has the cost of setting up such events.

It’s a challenge for us to convince sponsors and gather funds. Our personal funding, I feel, supports such events most of the time. It’s not only the organisers’ responsibility to promote the language; every individual shares or has to share it. If a language dies, its culture will vanish in no time. Our coming generations will read it then only in history.

Hasan Kamaal was awarded with ‘Life Time Achievement’ for his contribution towards Urdu literature and poetry. Five songs of this veteran poet were nominated for Filmfare award for the movie ‘Nikaah’ (best lyricist). In 1984, he was awarded the Filmfare award for best lyricst for the movie ‘Aaj ki Awaaz’. He has had a long innings in journalism too, where he headed a leading newspaper, Blitz Urdu, in Mumbai.

Amritanshu was the Talent Hunt winner. This year, in March, we announced a Talent Hunt programme. Very similar to Indian Idol, but for poetry.  Out of close to 1,000 entries of video recordings from across India, 40 were shortlisted. They were invited to Lucknow, where the Talent Hunt was hosted at Urdu Academy. Hasan Kamaal and Azhar Iqbal were the judges. Amritanshu’s performance was brilliant and was much appreciated.

Huzaifa Ali is an eight-year-old writer, whose book, ‘My friend Dinosaur’, was released during the event. He has been nominated for Guinness World Records in the youngest writer category. Huzaifa, though himself a little child, writes for children. He writes on his observations, perceptions of life and his emotions, through stories. His book is a collection of 13 stories. They have a lesson, and a moral too.

Finally, what is special about Indian High School that it is the event’s home?

It has a good capacity and can seat 1,400+ audience. The building, with theatre-style seating, is convenient to reach; the metro line is close by. There is also ample RTA Parking around the auditorium. The auditorium staff is courteous and the stage is of a grand size; the green rooms are well connected.