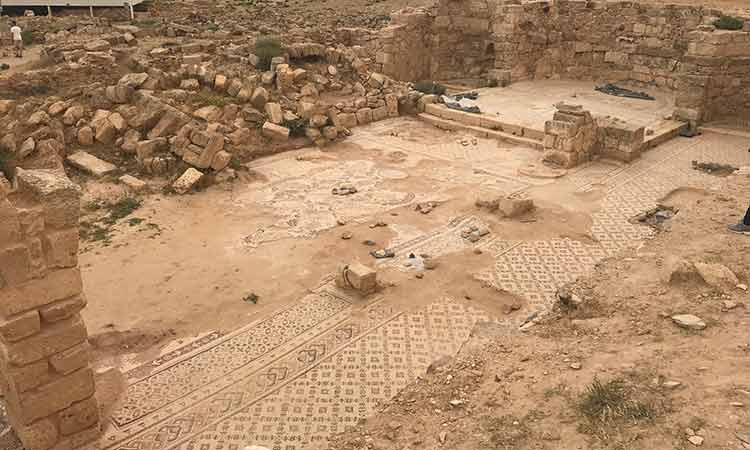 Getty Conservation  Institute (GCI) and International Centre for the Study of the Preservation and Restoration of Cultural Property (ICCROM) have announced they will hold two advanced training courses in Jordan and Lebanon, focused on the conservation of mosaics in the region.

The intensive schooling is among the final courses of the MOSAIKON initiative, a collaboration of the GCI, the Getty Foundation, ICCROM, and the International Committee for the Conservation of Mosaics (ICCM).

Since 2008, MOSAIKON has trained over 200 conservation professionals from countries of the southern and eastern Mediterranean region, who conducted research and model field projects as part of their training.

“MOSAIKON was created with the principal goal of promoting best practices for mosaic conservation at archaeological sites, museums, and storage facilities throughout the Mediterranean region,” said Jeanne Marie Teutonico, associate director at the GCI.

“ICCROM is honoured to have helped regional professionals conserve and manage archaeological sites with mosaics through 14 years of MOSAIKON experience and ICCROM’s partnership through its ATHAR Programme,” said Zaki Aslan, Director of the Regional Centre for the Conservation of Cultural Heritage in the Arab World (ICCROM –Sharjah). “Despite this initiative coming to a close, our dedication to its mission and objectives, and supporting regional collaboration with Member States in the Mediterranean, will continue.”

MOSAIKON Advanced Training on Preventive Conservation Measures for Archaeological Sites with Mosaics: Shelters & Reburial (Sept. 18 – 30) is being held in partnership with GCI and ICCROM and the Department of Antiquities of Jordan. It is a two-week course based in Amman, Jordan, that focuses on two strategic and sustainable approaches to conserving archaeological sites: the use of protective shelters and reburial. 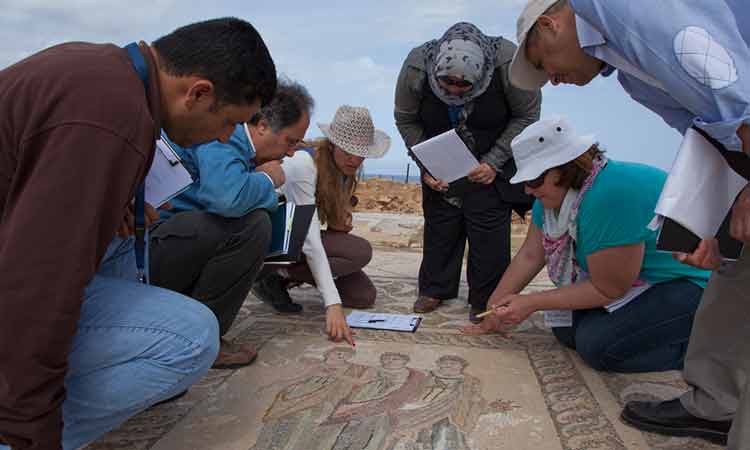 A team of conservationists on site.

Using the archaeological sites of Jerash, Um al Rasas, and Madaba as outdoor classrooms, and taking advantage of the wealth of mosaic heritage in Jordan, course participants learn complex techniques that can help achieve more stable environments for fragile historic remains, such as mosaics.

“Increasing the local expertise of professionals capable of managing and conserving cultural heritage, particularly archaeological sites, is of the utmost importance as we face a multitude of challenges in the field such as rapid urban development, threats from climate change, and simply not enough resources,” said Professor Fadi Bala’wi, Director General at Department of Antiquities of Jordan.

Eighteen participants from 10 countries — Albania, Algeria, Egypt, Greece, Jordan, Lebanon, Morocco, Palestine, Serbia, and Tunisia — were chosen to participate in the course. Most of the participants completed one of the three previous MOSAIKON courses held in Tyre, Lebanon in 2010, Paphos, Cyprus in 2014, and Volubilis, Morocco, in 2017, or possessed similar training.

MOSAIKON Training Worksite for the Conservation of Mosaics in Storage (Oct. 10 – Nov. 4) is being held in partnership with GCI and ICCROM, and the Directorate General of Antiquities of Lebanon (DGA). It is a four-week programme based in Sidon, Lebanon, that focuses on the conservation of mosaics in storage. The course convenes six DGA employees and five government employees from Libya and Jordan.

Lessons and practical exercises will be conducted, using examples from a large collection of lifted mosaics from downtown Beirut that have been stored in Sidon since 1998. “Lebanon was one of the first destinations for MOSAIKON courses and these trainings have greatly expanded our local expertise needed to manage ongoing issues,” said Sarkis Al KhourI, Director General at Directorate General of Antiquities of Lebanon.

Participating conservation technician trainees will study methodology for documenting and conserving lifted mosaics using lime mortars to stabilise and re-back them, along with preventive measures to store them long-term. The training worksite complements an earlier MOSAIKON course held at the site of Volubilis, Morocco, in 2018.

Getty is a leading global arts organisation committed to the exhibition, conservation, and understanding of the world’s artistic and cultural heritage. Working collaboratively with partners around the globe, the Getty Foundation, Getty Conservation Institute, Getty Museum and Getty Research Institute are a team dedicated to the greater understanding of the relationships between the world’s many cultures.

The Los Angeles-based J. Paul Getty Trust and Getty programmes share art, knowledge, and resources online at Getty.edu and welcome the public for free at the Getty Center and the Getty Villa. The Getty Conservation Institute (GCI) works internationally to advance conservation practice in the visual arts — interpreted to include objects, collections, architecture, and sites.

ICCROM is an intergovernmental organisation, headquartered in Rome, working to promote the conservation of all forms of cultural heritage in every region of the world. For more than six decades, it has partnered with Member States to support them in safeguarding heritage within their borders and beyond.

ICCROM-Sharjah is a regional conservation centre founded by ICCROM and the Government of the Emirate of Sharjah, UAE, where it has been based since its inception in 2012. It is a continuation of ICCROM’s ATHAR programme, launched in 2004, which dedicates its activities to the protection of cultural heritage in the Arab region and to broadening access, appreciation and understanding of its history.