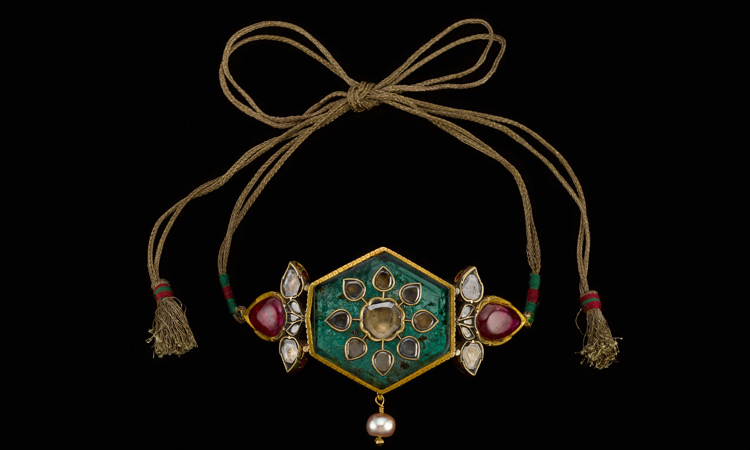 An emerald and diamond-set gold bazuband from North India.

Alongside Indian miniatures and Islamic manuscripts, 18th-century jewels and rare works of art are part of the ‘Arts of The Islamic World & India’ auction-sale at Sotheby’s London (Oct. 26). The objets d’art will be exhibited in Dubai (Oct. 3 — 7); New York (Sept. 15 — 20) and in London (Oct. 21 — 25). A 16th-century folio from Persia’s ‘The Book of Kings’ — one of the finest illustrated manuscripts in existence — is also being offered with an estimate of 4-6 million pounds.

“The Shahnameh of Shah Tahmasp is a perfect encapsulation of artistic skill, patronage and beauty — universally acknowledged as one of the supreme illustrated manuscripts of any period or culture and ranking among the greatest works of art in the world,” says Benedict Carter, Head of Department, Sotheby’s Islamic & Indian Art.

The Shahnameh — or ‘Book of Kings’ — made for Shah Tahmasp of Persia (r.1524-76) is a monumental tome that covers the greatest epic of Persian literature, containing 50,000 rhyming couplets. It tells the history of all Persia’s rulers from the country’s ancient mythical beginnings. The most lavishly illustrated copy of the 10th-century poem in existence, it was illustrated over the course of two decades from 1520 to 1540 by artists in the royal atelier. 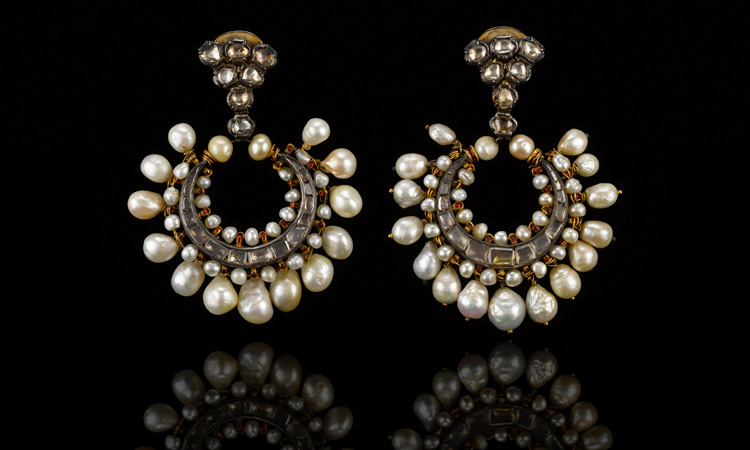 The folio on offer contains a scene that depicts the hero Rustam recovering his horse Rakhsh — named after the Persian word for lightning — two of the main figures over the course of the tale. It was commissioned by one emperor, Shah Ismail (the first of the Safavids), completed by another, his son and successor Shah Tahmasp, gifted to a third, Sultan Selim II of the Ottoman Empire, and was later owned by one of the great bibliophilic families of the modern era, the Barons de Rothschild, whose collections included such masterpieces as the Belles Heures of the Duc de Berry and the Hours of Catherine of Cleves.

Today, folios from the Shahnameh are treasured in museum collections internationally, including New York’s Metropolitan Museum of Art; The Smithsonian Institution in Washington DC; The Aga Khan Museum, Toronto; The David Collection, Copenhagen; The Nasser D. Khalili Collection of Islamic Art, London; The Museum of Islamic Art, Doha, and The Museum of Contemporary Art, Tehran.

Works of art and jewellery at Sotheby’s sale include a Fatimid carved rock crystal bottle, Egypt, late 10th-early 11th century which was carved from rock crystal. Produced during the heyday of Fatimid power, it is thought that these pieces were used by ladies of the harem for cosmetic purposes.

A pair of crescent-shaped pearl and diamond earrings, from Hyderabad, India, dating to late 18th-century belonged to a group of jewellery that was from the collection of the Nizam of Hyderabad. It was a dynasty of wealthy rulers known for their spectacular collection of jewels. The family had inherited gemstones from the earlier rulers of Deccan, who oversaw the famous Golconda mines — the world’s only supplier of diamonds for centuries. 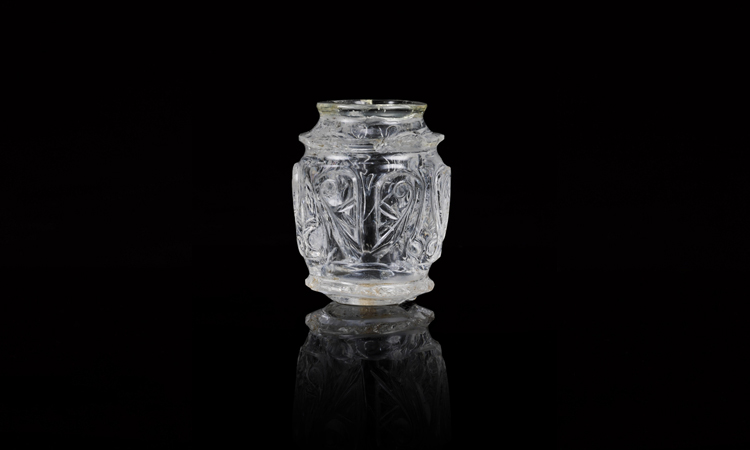 They were last exhibited at The Metropolitan Museum of Art, New York’s exhibition on the Sultans of Deccan India in 2015. A Mughal gem-set glass-hilted dagger and scabbard from 18th-century India, carries distinctive floral gem-set decoration, and is most likely to have been produced in the Deccan or for a Deccani patron.

The Collection of Maharani Jindan Kaur (1817-63), wife of Maharaja Ranjit Singh (1780-1839), is also on the table. A carved emerald and diamond-set gold bazuband and gem-set and enamelled belt buckle, are both from North India in the 19th-century. They were reputedly in the collection of Kaur. Works on paper and manuscripts include a double-sided illustration to the Tarikh-i-Alfi (The History of A Thousand Years), India, Imperial Mughal, circa 1590.

The History was written for the Mughal Emperor Akbar between 1582 and 1588, and recounts the ruling Caliphs through the Islamic period. The work is a folio, thought to be the last remaining in private hands, with only approximately eighteen or so others known to survive.

An illuminated Qur’an, coped by Yusuf ibn ‘Abdullah, student of ‘Ala al-Din Muhammad Tabrizi, Persia, Safavid, dated 983 CE, incorporates gold in the opening illumination, in contrast with a dazzling ultramarine lapis lazuli. The Qur’an, in good condition, exemplifies the height of Safavid illumination. A monumental Qur’an leaf in Kufic script (Near East or North Africa, circa 750 AD) is a folio that originates from one of the largest Kufic Qur’ans of the early Islamic period.

The sale also offers 15 Indian paintings from the collection of Betsy Salinger. The selection, not seen on the market in decades, crosses centuries, spanning outstanding Mughal folios to the distinctive styles of the lyrical Pahari schools, dynamic Rajasthani schools to the masterful Mughal and Deccani schools and court ateliers.

Among the highlights is The Pilgrimage of Maharana Sangram Singh of Mewar, circa 1720-30, which commemorates a historic royal pilgrimage to the temple and shrines of Srinathji in Nathdwara. It is considered impressive both for its large-scale and the complexity of the composition.

Also from the collection is An Encampment of Ascetics, circa 1680, a Deccani painting depicting a group of forty figures in the wilderness. Established in 1744, Sotheby’s is supported by a network of specialists spanning 40 countries and 70 categories which include Contemporary Art, Modern and Impressionist Art, Old Masters, Chinese Works of Art, Jewellery, Watches and Design, as well as collectible cars and real estate.