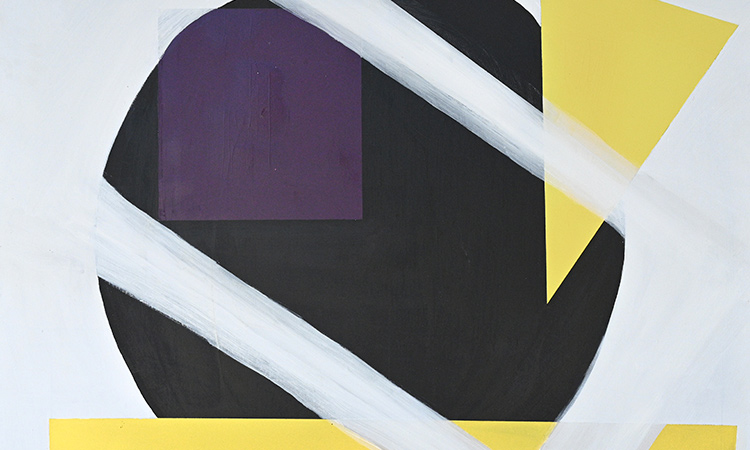 An Attempt to Stand Sarcastically, a work in oil on canvas.

Contiguous Areas, an exhibition by Palestinian artist Zohdy Qadry, is opening at Zawyeh Gallery, Ramallah, Palestine (Sept. 19 — Nov. 19). Zawyeh is a visual art gallery founded by Ziad Anani in Ramallah in 2013. In 2020, it expanded its space by opening a second location in Alserkal, Dubai, UAE.

Qadry, whose work relates directly to his nation’s history, is considered someone who brings Palestinian socio-historical issues into the art field via modern painting. Building on about twenty years of experience in abstract and expressionist art, in the current exhibition he explores relations between the expected and the unexpected, geometric form and free line, order and chaos, modern and traditional, loneliness and togetherness, as well as unity and synergy.

He creates an unstable relationship between different elements on the surfaces of his paintings; the square is sometimes surrounded by empty spaces, rather like Malevich’s square. It is used to symbolise stability — it also symbolises the “land” or its “loss”.

It is as if the artist is on an exploration mission, aiming to disrupt relations between forms, spaces, and everything that suggests stability and order. He presents shapes in clear, precise lines at times, while on other occasions, he creates chaos by uniting shapes and backgrounds.

Circles and squares dominate his work; the perfect circle has always been a source of fascination for him. But here it is an imperfect, mysterious mass that may represent the truth - or perhaps himself. He uses the circle as if to indicate his presence on a map of scattered or carefully arranged geometric shapes. It appears as a single spot in the face of a large solid area in Survival, or is obstructed by a rectangle in An Attempt to Stand Sarcastically.

It blends with lines that hamper autonomy in An Attempt to Rise, while forming a union between heaven and earth in the work On the Threshold of Question. The circle stands out powerfully against the backgrounds with contrasting colours as well as against the shapes that obstruct its independence.

The secret of Qadry’s circle lies in its ability of containment; it contains the scene, the viewer, and other shapes.The square is just as important. It is a major recurring feature and often appears within arrangements of lines, empty spaces or reoccurring elements, forming layers of colour and new dimensions.

Qadry uses the triangle to connect the rest of the geometric shapes in his paintings; but he does not use the triangle’s base to stabilise the picture. On the contrary, he paints it hovering at the top of the painting, creating a state of anxiety and tension with adjacent shapes. He creates spaces of stress between shapes and lines as he tries to explore the shift from the unity and independence of shapes, to forming a unity in form that is difficult to discern. 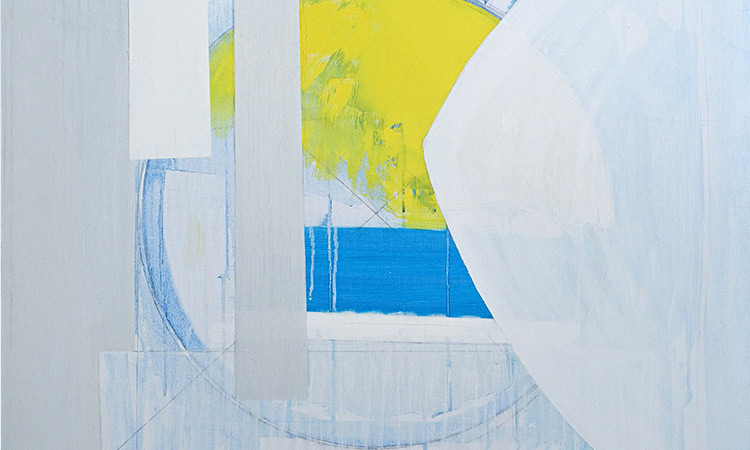 A Hesitant Attempt to Recover is a work in oil on canvas.

About his unorthodoxy, Qadry has said that “as a painter, I strive to formulate numerous questions – and answers – as part of the format of painting, rather than cling to artistic or social laws and values intended to dominate me and dictate my fate.” However, his work seems able to express the Palestinian’s socio-historical tragedy through visualisation via technique, material and in abstract geometrical language.

He is originally from Nahaf, a village in the Galilee. He completed his BA degree in Fine Art and won his MA degree in murals at the Academy for Art and Industry in St. Petersburg, Russia. The infrastructure of his art was made by pairing the Palestinian experience with the Russian art legacy he imbibed. It combines a Palestinian-Russian modern style of art.

The main theme in his work between 1996 and 2003 was that of “Home”. In recent years, he has taken geometric shapes as his artistic language. The works here do not represent reality; they aim to present the logic of formation, materially and formally. They propose questions about how art production works in the colonial Palestinian context, and how art acquires socio-historical meaning.

Qadry has often spoken about feelings of numbness and abhorrence that engulfs him, while witnessing the tragic situation of the Palestinian people. The emotions are best depicted in his large, abstract expressionist work, which have become his trademark. He has exhibited widely both at home and internationally, including the UAE (Dubai), USA, Russia and France.

The exhibition is one of a series that are organised by Zawyeh Gallery in Ramallah, as part of the efforts to give a platform for Palestinian artists living in 1948 “Nakba” areas to connect with their Palestinian audiences in the occupied Palestinian Territories of 1967.

Ramallah is fast becoming known as the culture capital of the West Bank, and for art lovers, it is easy to see why. Home to an increasing number of galleries, institutes and arts and cultural non-profit organisations, the city has become a hub of creative thinking, thanks to its young and forward-thinking population and a new generation of boundary-pushing artists.

Tucked away in Jawwal Square, Zawyeh — meaning ‘corner’ in Arabic - is one of the leading independent contemporary art galleries in the West Bank. The gallery showcases the work of local artists, including a number from Gaza, often focusing on innovative and moving portrayals of life under occupation that sometimes broach deeply personal or taboo subjects.Zawyeh also has a great range of posters and postcards available for purchase, which make for memorable souvenirs and gifts.