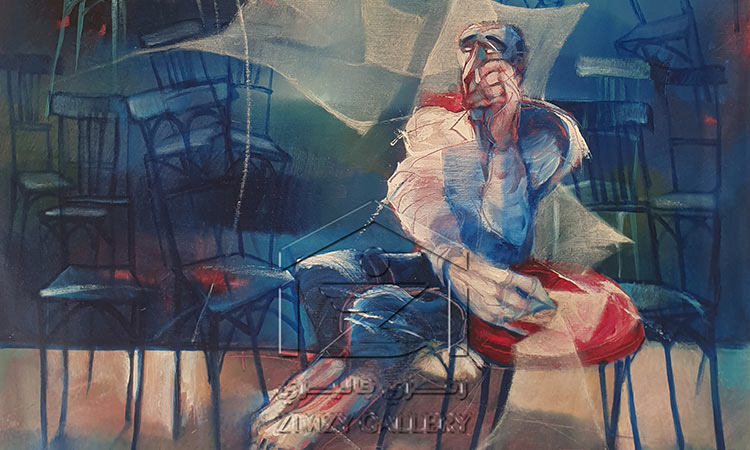 An artwork on view at Zimzy Gallery.

The Path of Aleppo Modernity exhibition on view at Zimzy Gallery, Dubai (July 22 — for two months) explores the position of artists between heritage and modernity in Aleppo, Syria, during a period of a quarter of a century.

The art movement in Syria during the past hundred years in Aleppo gave birth to many pioneering artists. They laid one of the foundations of modern Syrian art. Aleppine art and artists have had a great influence on the Syrian art.

The second generation of artists followed the path of the first generation and presented many works, influenced by European art, which they had imbibed through their studies in the West. After learning about the cultures and mores of international art, the third generation artists began presenting traditional works, blending them with modernity.

Al Moudarres’ (1922 — 1999) early paintings are characterised by his mission and constant quest to establish a new Arab school in art that compares and competes with Western schools.

His paintings were a window for modern art to enter the world of Syrian art. His themes are derived from the local environment and from social and national life; his artistic elements are taken from rural folklore and his colours are as hot as the colours of the land where he lived.

In his artworks, there are new, innovative formulas based on geometrical modifications, that includes faces. He added elements of folkloric heritage to the human body, which became a feature of his works and a characteristic of his art — it was his own special formula. Maghareba (b. 1942) occupied (even at his debut) a prestigious place among eminent artists who are considered pioneers today. His outstanding presence has continued inside and outside his country, with a high class and distinguished personal style that evolved and took on modernity, without losing authenticity. In his works, one sees his historical imagination related to heritage.

Khanji (b. 1950) never stopped seeking the renewal and development of art in Aleppo. He won artistic freedom for himself by adopting and creating ideas woven in different visual art forms, using a wide range of tools and techniques to realise personal ambitions and for appealing to all artistic tastes. 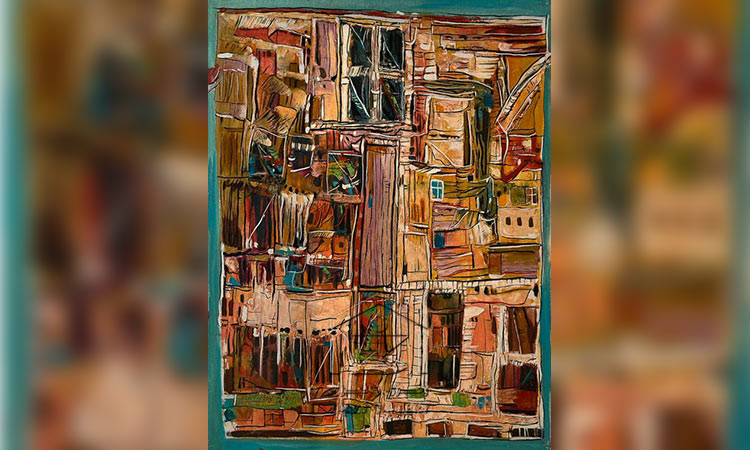 He is among the greatest Aleppine artists who took keen interest in embodying ‘Mawlawi’ rituals, decorative scenery, and letters from the Arabic language. He experimented vastly with metal engraving - which allowed him to demonstrate incredible skills in making three-dimensional visual artworks.

He also used engraving in paintings, portraying aesthetic aspects of decoration, colour and shading, without the need to change colours. Daoud, an academician who provides human and animal shapes that seem strange to those who do not delve into the study of the theme, is regarded as one of the artists whose oeuvre is far removed from imitation and repetition.

He does not follow a single path but rather takes all routes, no matter where they lead. It offers slim shapes free from the weight of the message: the artist draws shapes from imagination, with a critical social appeal.

Muharram’s (1954 — 2009) paintings have the ability to attract the viewer to their many worlds; they seem simple at first, but the recipient soon discovers he has entered into worlds that mix reality and dreams, intertwined perhaps as in a musical symphony.

Yakan (b. 1950) uses colours which have particular psychological connotations. Red has its importance while black and white colours have their own individuality; each artwork carries its own symbols. Barho specialises in oil painting and its techniques. He is an abstract artist whose style depends on colour gradients travelling between dark and light, blending to create plenty of mystery and ambiguity. Al Sajer (b. 1955) abstracts most of his works; but he does not destroy the forms in their entirety, but preserves realistic and readable lines. He summarises what he wants in abstract, while maintaining their weight and basic mass. His portraits have sad features with fragile dreams and ghostly talismans, and they are equipped with masks, with many tears for sadness - and a few for joy.

Hammo evokes faces from distant memory; they are wrapped with a touch of cruelty and loneliness, extending to an endless horizon. They bear colour concepts, rich with feelings and spontaneous touches that bond with the overall vision of the artwork. They unleash the vital powers of imagination or emotion.

Al-Hamwi’s paintings affirm the stock of his experience and burning memories. He is an artist who lives the experiences of Maqama d’Alep, where he lived from his young age. The reality of his feelings and experiences as a youth and child in Aleppo al-Shahba, are seen in his mature years.

His colour spectrum dances in the compositions and the relationships between blue, red, yellow, violet, orange, green, black and white, are well defined. He started painting from an early age and was fascinated by Arabic calligraphy or “Arabic art”, early on. When he was older, he often looked at art from around the world: he has received a lot of inspiration from oriental music.

He believes that artists have been created to make the world better, while there are people trying to destroy it. 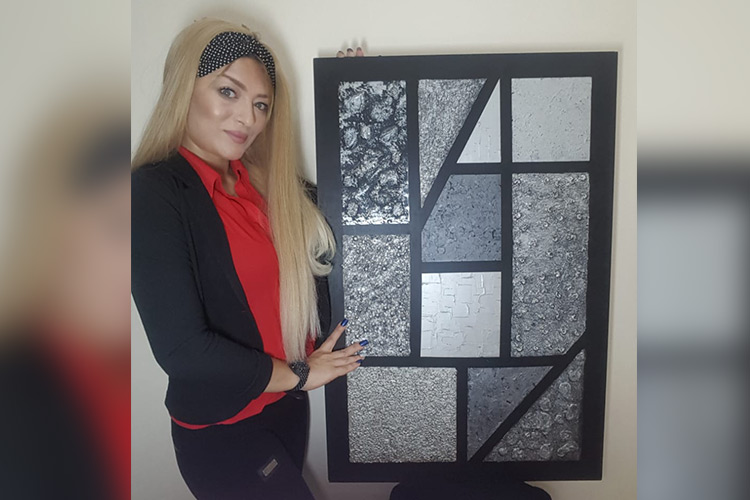 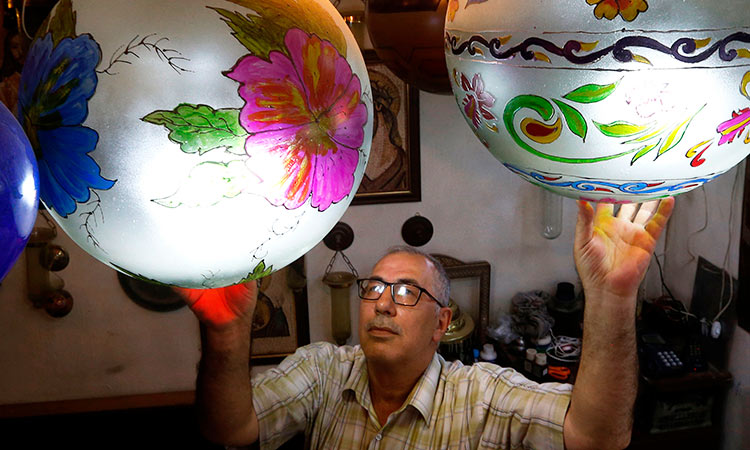 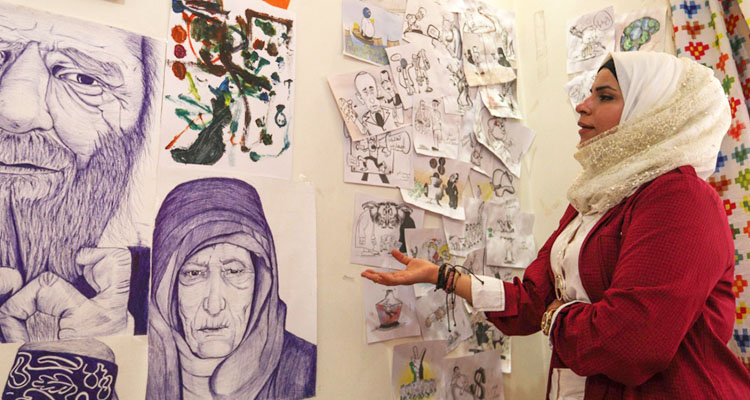 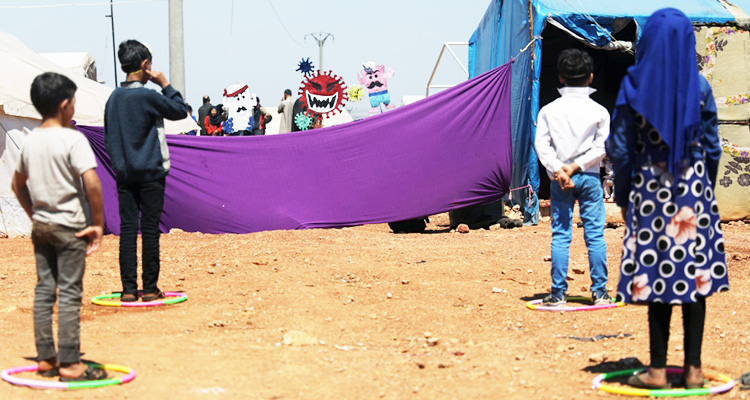