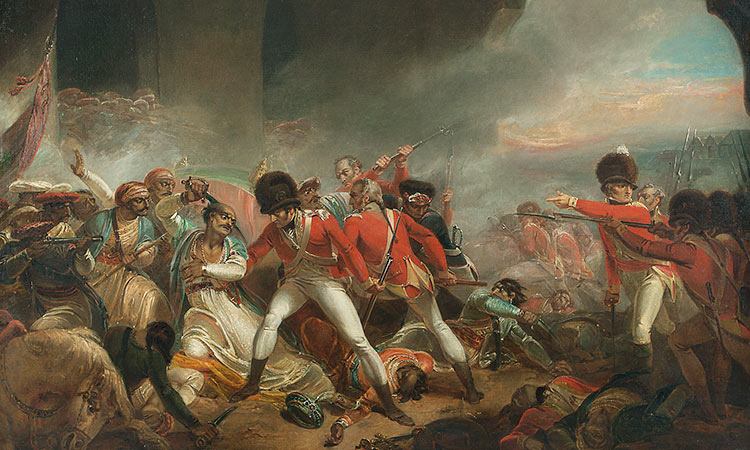 A scene from one of the Mysore Wars.

An extraordinary and historical exhibition of paintings, prints, maps and other objects recounting a visual history of the Mysore Wars between the East India Company and Tipu Sultan collected from around the world and now housed permanently in India, is being inaugurated at DAG gallery, New Delhi (July 25).

Titled Tipu Sultan: Image & Distance, curated by Dr. Giles Tillotson and accompanied by a book with chapters contributed by leading specialists including Janaki Nair, Jennifer Howes and Savita Kumari, the exhibition aims to recount a visual history of the Mysore Wars between the East India Company and Tipu Sultan, and explore how the public narrative might have changed 222 years after the siege of Srirangapatana.

Tipu Sultan was the ruler of the Kingdom of Mysore based in South India. He was an implacable enemy of the British East India Company and fought a series of wars with it. In the fourth and last in the series, he was killed, while defending his stronghold of Srirangapatana, in 1799.

Like a dream: Japanese grandpa draws in following as art YouTuber

The images, based on the British view of the time, are critically examined by Tillotson to reflect changing perceptions and Indian views on these epic battles and their political and social fallouts.

Tipu Sultan takes hold of the view formed by the British at the time of their struggle against him, and their defeat of him; examines it critically and brings it before audiences in India, to see how people here might — with the benefit of distance — review their image of him.

It surveys paintings and engravings, illustrating key episodes and events from the Mysore Wars fought between 1767 and 1799, and places them in the context of history painting in Britain and France in the late eighteenth century. Leading artists such as Mather Brown, Henry Singleton and Robert Ker Porter, produced and displayed many large canvases depicting such turning points as the surrender of two of Tipu’s sons to Lord Cornwallis as hostages in 1792, the siege of Srirangapatana and the death of Tipu Sultan in 1799 at the close of the siege, without ever having visited India. 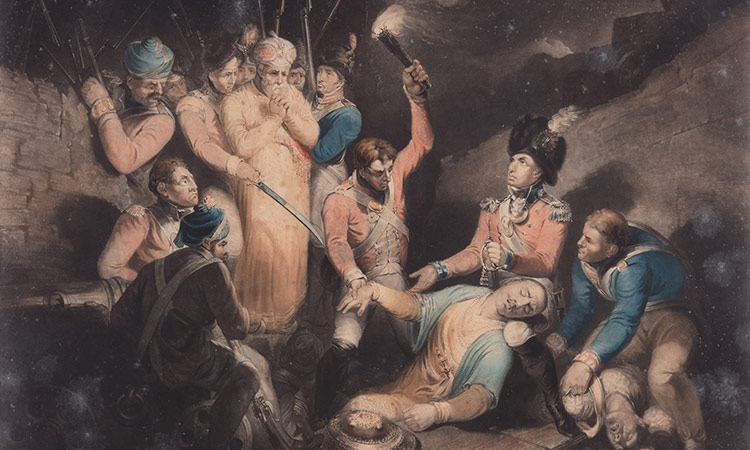 Discovering the body of Tipu Sultan.

Painted based on British records and through imagination, they appealed to the voyeuristic interest the British had in stories of British triumphalism, greatly enhancing the artists’ reputations – and incomes. To put these views and objects in a wider context, the exhibition includes some works by Indian artists made around the same time.

The exhibition follows the recent acquisition of a major painting by Henry Singleton depicting ‘The Last Effort and Fall of Tippoo Sultaun’ among others, bringing this primary material permanently to India.

Made by a British artist for British audiences, it had remained in Britain since the time of its making, shortly after the event that it depicts that occurred in 1799.

“Bucking the trend of Indian works of art being exported abroad, we decided to bring this material to India, to display to Indian audiences,” says Ashish Anand, DAG MD and CEO.

“This led us to consider some further questions: what does Tipu Sultan mean to people in India today? What did he stand for? “His reputation remains controversial in some parts of the country, with popular writers and even some scholars taking up extreme positions.

“Some people idolise him while others are fiercely dismissive of his contribution. What cannot be disputed is that he was the most formidable foe the British faced in India.

“Yet, he is not accorded the same respect as others who took up arms against the British in later times, such as the Rani of Jhansi or Subhash Chandra Bose. How these images are interpreted in India today is what this exhibition explores.” According to Tillotson, who is also Senior VP (Exhibitions and Publications), “as much through engraved versions as the originals, these works are well known and they have been surveyed and illustrated before — but not always, I think, in ways that are alert to details of the development of history painting in England and France in the period.

“I locate them between a previously established type, which aimed to illustrate episodes exemplifying heroic virtue, and a newly emerging type of war painting.

“More importantly, the works and the attitudes that they are shown to embody, originally directed towards a British public, are here presented for scrutiny for the first time specifically to audiences in India.” The book that accompanies the exhibition explores Tipu’s Sultan’s changing reputation and legacy through time, the visual and material culture of his own court, and the women of his family, who have been overlooked in earlier narratives.

Its five chapters aim to shed new light on this much-discussed historical figure and his times by approaching them from new perspectives.

Tipu Sultan had an unrivalled career as a subject of British history painting. Some other military leaders, both ancient and modern — such as the Roman general Germanicus and Lord Nelson — enjoyed pretty good runs; but in the closing decade of the eighteenth century, artists fed a public appetite for images relating to Tipu Sultan on a scale that was unsurpassed by any other comparable figure.

DAG was established as a private art gallery in 1993 and besides New Delhi, has spaces in Mumbai and New York.