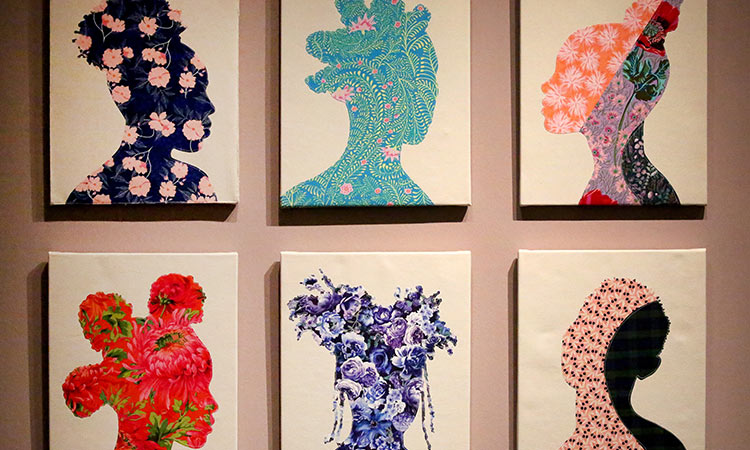 “I’m making the art that I wanted to see.” That is how Bahamian artist Gio Swaby explained her textile-based portraits of Black women, on display at the Museum of Fine Arts, St. Petersburg in her first museum solo exhibition, “Gio Swaby: Fresh Up.”

The exhibition is co-organized by the Museum of Fine Arts and the Art Institute of Chicago. It is co-curated by Katherine Pill and Melinda Watt.

After the exhibition ends its run here, it will travel to the Art Institute of Chicago and the Peabody Essex Museum in Salem, Massachusetts, in 2023.

The solo museum show is the latest rung on the ladder for Toronto-based artist Swaby, who is 30. Her first solo showing, in New York City at Harlem’s Claire Oliver Gallery, sold out. She’s been featured in The New York Times and Harper’s Bazaar.

Swaby deems her work love letters to Black women. Through self-portraits and portraits of friends and family, she explores the intersections of Blackness and womanhood while showcasing the complexities of her subjects by focusing on personal style. During a media preview of the exhibition, Swaby was there to talk about her work. She explained how the title, “Fresh Up,” is a compliment used in the Bahamas for when someone is dressed up.

For those who didn’t get the privilege of hearing her speak in person, the wall texts for each section are in her own words, some with QR codes that let you hear her speak through an app on mobile devices. The exhibition rounds up Swaby’s work in seven series. It begins with “My Hands Are Clean,” self-portraits rendered in thread that reference the experience Swaby went through upon moving to Canada, in which non-Black people would ask to touch her hair. When Swaby would decline, “my hands are clean” was often the response.

“But then the second part is actually about the kind of metaphor for cleaning of the hands, removing yourself from the responsibility of the interaction and placing that responsibility on me essentially, because now I need to navigate how we kind of process this,” she said. Swaby’s technique of stitching on and showing the reverse side of the canvas also imbues meaning. “It’s a true indication of being able to share this moment of vulnerability with the viewer,” she said. “Because we see things here that we’re not necessarily always supposed to see. These are some of the things that are often hidden and covered. I wanted to uncover those because I’m thinking about this beauty of imperfection and how we can celebrate that.” 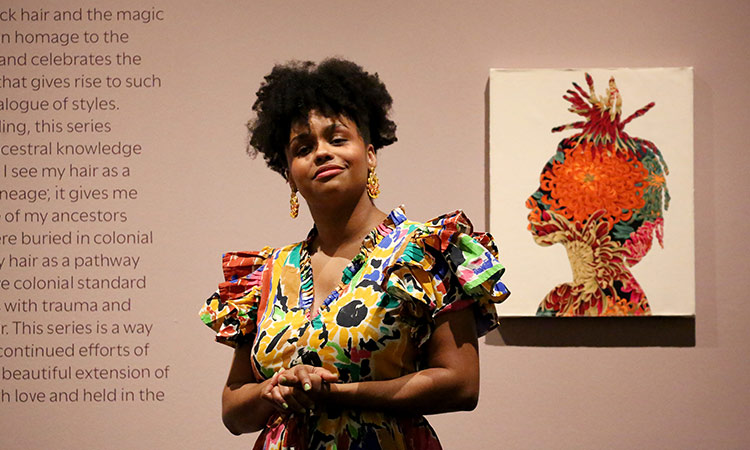 Life-sized portraits advance the boundaries of the tradition of quilting, particularly among Black communities, in the “Love Letters” series. Swaby was motivated by the practice of writing letters to express love to people who are no longer alive, including her mother, who was a seamstress and inspired Swaby’s attraction to textiles. She wanted to translate those letters visually, so she depicted her three sisters and her close friends in colorful printed fabric.

Making her sisters’ portraits was an important part of Swaby’s practice of making monumental portraits. Because of how intimately she knows them, she felt a responsibility of capturing their true essence. The portraits were made in a collaborative process that Swaby said led to a deeper connection among them. Despite the portraits capturing her sisters’ postures and poses, Swaby intentionally leaves facial features out. “They’re also a larger love letter to my extended support system of Black women everywhere,” she said. “... I think in these works, you have more of the opportunity to be able to see versions of someone or of yourself that you recognize where the features are lesser.”

Technique-wise, there are the occasional “happy surprises,” like on the boots where the fabric repeats “in such a way that you can get two kind of very different looking parts if you cut it out in the right way.” Swaby’s reflections on personal style — her own and that of her subjects — are deeply rooted in her artwork. Her series “Going Out Clothes” encapsulates this notion, although it pervades her practice of discussing her subjects’ outfit choices.

“I consider this work to be a celebration of personal style in that respect, but also considering that most of my work and what I do, what I’m doing is representing other Black women,” she said. “And I feel like we do navigate this space of hyper visibility, as well as having moments of being invisible, being unseen, or wanting to be unseen.”

In the series “Pretty Pretty,” the title also comes from a Bahamian phrase, which essentially means “extra pretty.” For Swaby, making portraits of friends and family is a way to celebrate and stay connected to the Bahamas. “Pretty Pretty 8,” which was acquired by the museum, depicts Swaby’s artist friend Cydne Jasmin Coleby. In the series, Swaby chooses a particular part of the outfit to render in fabric, taking care not to overtake the line of the thread. In the series “New Growth” Swaby explores hair, which she says is an “integral aspect of Blackness, especially for Black women.” Through vibrant fabric depicting iconic hairstyles, she celebrates the versatility of Black hair and the connection to her ancestral history, as well as the personal practice of learning how to style or having hair done by another Black woman. She sees hair care as love between Black women.

Swaby said the moment when the viewer sees her work is the final touch of her practice.

“Oftentimes people recognize themselves or someone they know reflected in this work,” she said. “They see versions of that and that is so essential to my practice and really why I make this work. Those are the most beautiful moments to me. Those are kind of the moments where I feel the most validation of the work that I’m doing, where I feel that the work is reaching the people that it should be reaching.” Most importantly, Swaby wants Black women to see themselves reflected in her nuanced work. “There’s this representation made with such reverence and love of everyday people,” she said. “We don’t have to be extraordinary or on the complete opposite end of depicting trauma and suffering. We can be just as we are and represented and regarded with love and care and reverence. And that’s what I want Black women and girls to see when they see my work.”