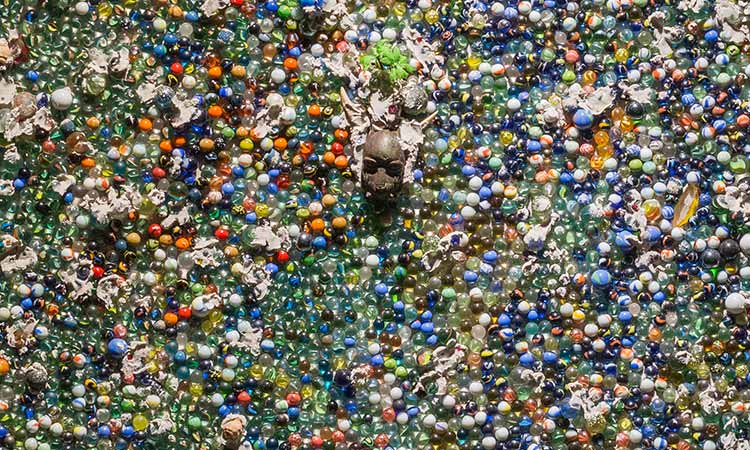 Galleria Continua has announced the extension of its exhibition programme at the iconic Burj Al Arab Jumeirah. For its third exhibition there, the gallery is presenting a group show titled NEW WAVE (June 7 – Sept. 1) featuring artists represented by the gallery across different continents, divided and united by water.

NEW WAVE opens a new series of exhibitions paying tribute to the Burj Al Arab’s heritage, and providing contemporary response to the context of its opulent interior designs, developed by Khuan Chew of KCA International.

The visual aesthetics of the hotel’s decor revolve around the idea of the four elements: water, air, fire and earth. The theme of NEW WAVE focuses on water, and creates a dialogue with the history of the hotel, its position on a man-made island in the Arabian Gulf, and the landscape views opening from the gallery space.

The site-specific installation Waterbones (2022) by Italian artist Cecchini is positioned in the central part of the gallery, representing particles of water.  The structure interacts with the architectural volume of its surroundings, and plays with forms of abstraction and geometry.

Consisting of hundreds of steel modules, it manifests a memento mori against its idealistic background. Following the monochromatic nature of Cecchini’s Waterbones, the drawings series A Fior d’Acqua (2014-2015) by Italian artist Serse, outline water ripples.

Here, the geometry of liquid forms appears through lights and shadows, while the absence of human context creates a dream-like, almost meditative state.

The human context of the show appears in Lampedusa D, 2016, by Cameroon born Tayou. The artist uses glass marbles and playful toys free of any painful signification. 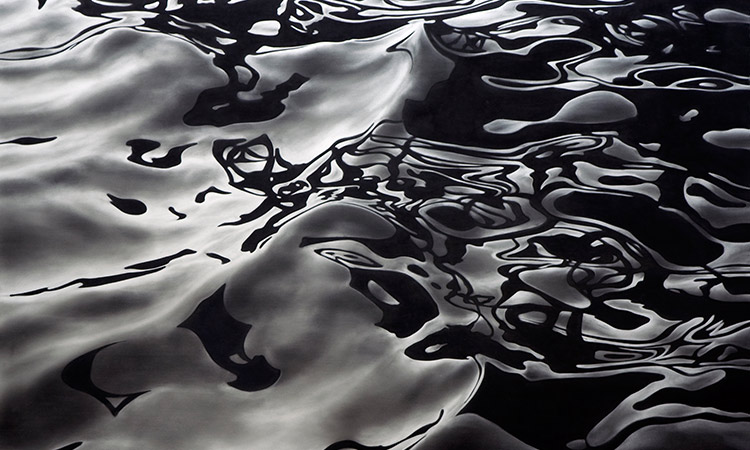 NEW WAVE is linked to Burj Al Arab’s location on a man-made island in the Arabian Gulf.

A picture composed of thousands of marbles, however, starts to appear as an abstract landscape of waves and floating figures.

The island of Lampedusa, famous for serene beaches, is also known as landing point for refugees seeking asylum in the European Union, after days of dangerous sailing in the Mediterranean Sea.

Reflecting on the notion of partiality, Kapoor’s Split (Organic Green and Burple, 2017) challenges the ability of the viewer to picture the object while looking at it.

By multiplicating perspectives, the work creates an interface between what is revealed and what is hidden, encouraging the viewer to reconstruct it internally. The proposition is that being on the inside and on the outside of the object are totally different from each other.

With the drawing medium, Goa-based artist Chopra also leaves behind the remnants of his physical presence. Remembering Act: Musandam (2018) is based on his performance commissioned by Sharjah Art Foundation in 2015, in which the artist took a meditative journey on a dhow into Musandam waters off the coast of Oman.

Quite opposite to Chopra, Cuban artist Capote portrays the sea as an ideological frontier, a tactile, imposing entrapment. In Palangre (2019), he creates an allegory of the modern days in Cuban experience, where Palangre — the Spanish term for a trawl line hung with hundreds of fishhooks - symbolises the tragic stories of those attempting to swim across the rough waters of Florida Straits towards the United States.

The Mediterranean Sea centered in Pistoletto’s Love Difference (2002), mirrors the dynamics of global society. The artwork is realised as part of an ongoing movement, offering public opportunities for discussion and dialogue.

Condition of the water itself and its movement in closed urban cyles is reflected in the Acquerelli (2017) drawings by an Italian duo Ornaghi & Prestinari.

Reproducing the patterns and behaviours of water, the artworks are worked out using watercolours diluted with treated water from the Santa Croce sull’Arno purification plant, collected at the point where it returns to the Usciana river in Italy.  The photo series Dune (2015) are taken by Italian artist Giovanni Ozzola at Dune of Pilat, France, recognised as a tallest sand dune in Europe.  Sharpened in the dark and overwhelmed by the strong light of a wider space, the photo evokes the rattling mechanical movement of the rolling door shutter, contrasting with the wide opening of the horizon onto the Atlantic Ocean.

The subjects populating Sedmach’s canvases Dove (2011) and Heimlich (2015) are distant, indefinite and unknowable places – fogs and vapours, marine atmospheres, deserts, and endless horizons. Her works explore inscrutable spaces and dilated time, where every horizon achieved gives rise to another journey.

“Remaining faithful to the spirit of perpetual evolution, and committed to engaging the widest possible audiences in contemporary art, Galleria Continua has built a strong identity through its bonds and experiences, thriving away from the conventional urban centres, in completely unexpected yet timeless locations,” it says. The gallery opened as the result of the initiative of three friends: Mario Cristiani, Lorenzo Fiaschi and Maurizio Rigillo. Galleria Continua first established itself in an unexpected location - far from big cities and established art circuits – in San Gimignano, a town steeped in history but somehow out of time, in the heart of Tuscany.   The current programme in Dubai follows the 15-year presence of Galleria Continua in the emirate and its certified commitment to the artistic scene of the region.