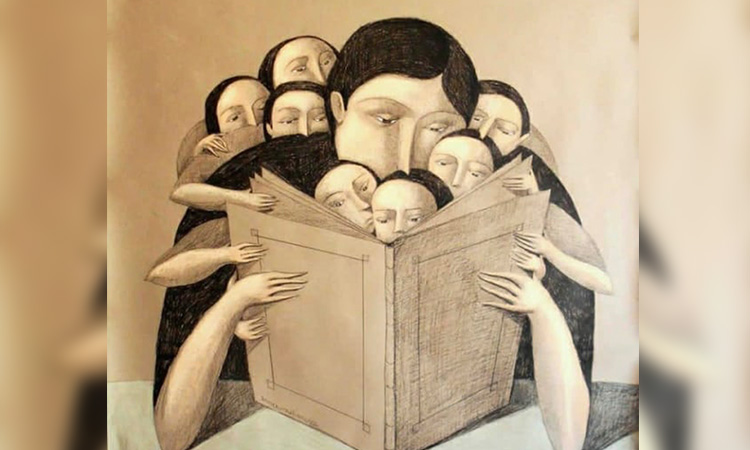 In her paintings, Annie Kurkdijian depicts the trauma of war.

Firetti Contemporary is presenting Eyes Wide Shut, a collective exhibition of ten women artists from the UAE, Iran, Armenia, Ukraine, Palestine, Egypt, Syria, Lebanon and Kuwait (May 12 - Aug. 12). It explores a wide range of socio-political issues through many mediums, such as painting, collage, video and installation.

The exhibition is a dialogue of individual styles by women artists belonging to three different generations (Generation X, Millennials and Generation Z) who, while navigating their own journeys, question accepted narratives, shedding light on pressing issues.

The artists deal with a variety of themes, including cultural and gender identity; interpersonal relationships; and broader sociopolitical dynamics, arising from both their surroundings and beyond. They investigate with their individual lens and their findings give rise to discussions, even as they draw attention to their diverse and varied experiences.  Each artist conveys the struggles and conflicts they encounter as women, both privately and publicly, and bring fresh perspectives and approaches. But in doing so, they also transcend  gender and cultural differences, embracing a more universal sense of human nature.

The artists challenge preconceived notions and expose blind spots: they aim to teach us to see and think anew. Eyes Wide Shut is an invitation to change our perspectives and open our eyes to the realities of the contemporary world.

The themes of war and displacement recur. The paintings by Annie Kurkdjian are a “living tragedy” that question us about life itself, compelling viewers to contemplate the very process of creation. Kurkdijian depicts her trauma caused by sixteen years of civil war in her homeland, Beirut, Lebanon, and the trauma of the Armenian genocide lived through her grandmother’s history. Her childhood was marked by the noise of bombs, terror, permanent insecurity and the undependability of ordinary things.

On the other hand, young Ukrainian artist Maria Shapranova, highlights the current tragedies taking place in Ukraine. Her mixed-media collages reflect on the resilience and strength of women in Ukraine in their current battle with Russia.  Her works are bold and filled with pride for Ukraine and Ukrainians, who are sacrificing their lives and fighting for freedom. Ukrainian culture symbolism is shown in every detail of her collages. 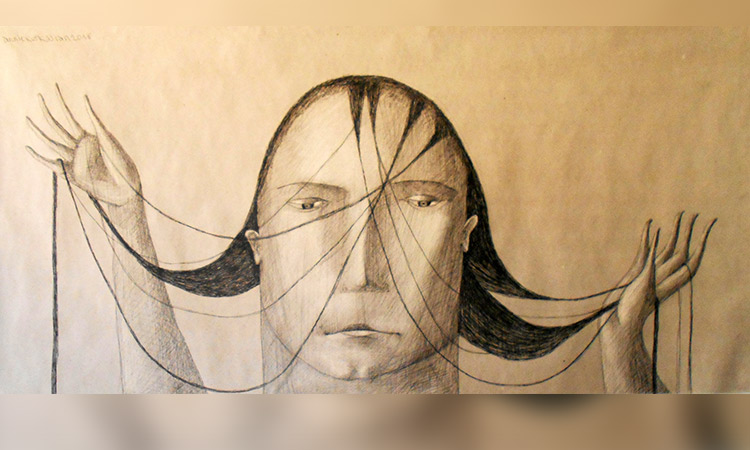 The ongoing tragedy in Ukraine and the loss of a homeland are also presented through the works of Amani Al Thuwani. The multidisciplinary artist was born and spent her early childhood in Ukraine, watching fairytales such as The Nut Cracker and drawing stories of love and weddings, including brides with long braids, folk headpieces and big dresses.

After relocating to Kuwait, she discovered local marriage traditions and rituals that became the starting point of a work that analyses her cultural identities, while questioning the commodification of marriage and luxury-consumer culture.

In the exhibition, Al Thuwaini summons in a dream-like manner her childhood memories and confronts them with contemporary realities, while paying tribute to her native city, Kharkiv. Art for her is a way to preserve and forward memories against the attempted erasure of a country.

For multidisciplinary Saudi-based Palestinian artist Qamar Abdulmalik, art is the path to bring forth her personal experiences as a Palestinian refugee and the global systems that impact the Arab diaspora. She invites us into a surreal journey where her alter ego is transported by an elevator into a fairy-tale world made of papier mache.

Its sixth floor transposes the office of the same number at the Egyptian embassy in Riyadh that handles identity papers for Palestinian refugees, thus bringing focus to the seemingly mundane day-to-day happenings that are actually critical struggles in the lives of undocumented immigrants. Cut and Paste Dreams emphasises the power of dreams to transform reality.

By combining contemporary architecture production processes with traditional art production techniques, Syrian artist Sawsan Al Bahar, explores “looking at the meaning of Time to the people of the Middle East”, often by referencing the past and addressing the issues and events of the 19th and 20th centuries.

In the works of Iranian artist Negin Fallah, constant dialogue between chaos and harmony is encountered. Fallah’s works explore unrealistic societal expectations from a daughter, a sister, a wife and most importantly, a mother. She highlights women of faith, those who have been historically playing a pivotal role in challenging gender inequality, and those who continue to defy stereotypes in politics and societies.

Emirati artist Afra Al Suwaidi’s works reveal the perseverance of powerful women of the Middle East through a series of mixed media collage works. They investigate the public versus the private domain and narrate the untold stories of women who have been stigmatised, stifled, and forgotten due to cultural and social constraints.

Young Emirati artist Khawla Al Marzooqi, similarly reflects on the everyday life of Khaleeji women, drawing inspiration from her own life and conversations with women from all walks of life. She presents the real anger and emotions that comes from being a woman.

Topics of identity and environment are further explored by Kuwaiti visual artist Alymamah Rashed, who investigates the discourse of her own body, fluctuating between the east and the west. Her work negotiates her female subjectivity, regional folklore and the banal objects that she encounters in her everyday life.  Egyptian artist Amina Yahia explores the idea of control, both in terms of how women’s roles are determined by society and reinforced by the State. Her work is concerned with concepts of power, authority, class, autonomy, gender, desire, control and perception, and the relationships between them.