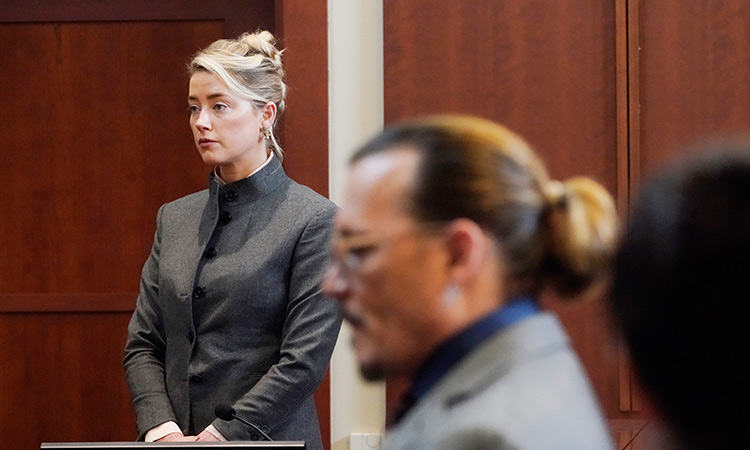 Actors Amber Heard and Johnny Depp watch as the jury comes into the courtroom.

Johnny Depp appeared to scoff as an audio of Amber Heard calling him “Junkie Johnny” was played in court during the former couple’s multi-million-dollar defamation trial.

Heard took the stand on Monday for a third day of testimony as the trial resumed after a one-week break.

She told the court how she would face “different versions” of  Depp and that it was a “juggling act” over which version she would get.

In the audio played to the court, Heard says: “Then I get different versions of him. I get the insecure or scared version of him that lashes out in a different medium every time.

“So if it’s Adderall or Junkie Johnny, then he’s abusive and he’s a tyrant and he’s mean.”

At the mention of “Junkie Johnny”, Depp – who had his head down taking notes at the time – was seen smirking with his shoulders lifting in a laugh.

Heard continued to claim in the audio that this version of her former spouse would lead to “violence or anger”.

“If I argue back with him then I’m abusive... if I don’t say anything then I’m dismissive... if I engage with him I’m part of the problem,” she says.

Heard told the court that the recording depicted her trying to explain to Depp the “futility” of trying “to negotiate with him and the substances he was on at the time”. 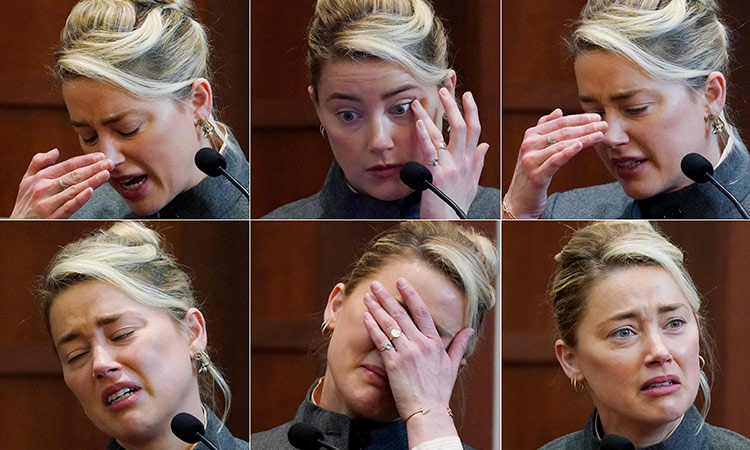 Combo image shows US actress Amber Heard as she testifies in the courtroom. AFP

“And I was constantly doing a juggling act of what kind of versions of Johnny I was dealing with.”

Depp is suing his ex-wife for defamation over a 2018 op-ed she penned for The Washington Post where she described herself as a “a public figure representing domestic abuse”.

The Pirates of the Caribbean actor is not named in the article, which is titled “I spoke up against sexual violence – and faced our culture’s wrath. That has to change”.

However Depp claims that it falsely implies that he is a domestic abuser – something that he strongly denies – and that it has left him struggling to land roles in Hollywood. He is suing for $50m.

Heard is countersuing for $100m, accusing Mr Depp of orchestrating a “smear campaign” against her and describing his lawsuit as a continuation of “abuse and harassment”.

The trial began on 11 April in Fairfax, Virginia, with explosive testimony playing out inside the courtroom.