VIDEO: American couple set themselves on fire during their wedding for photo sessions - GulfToday 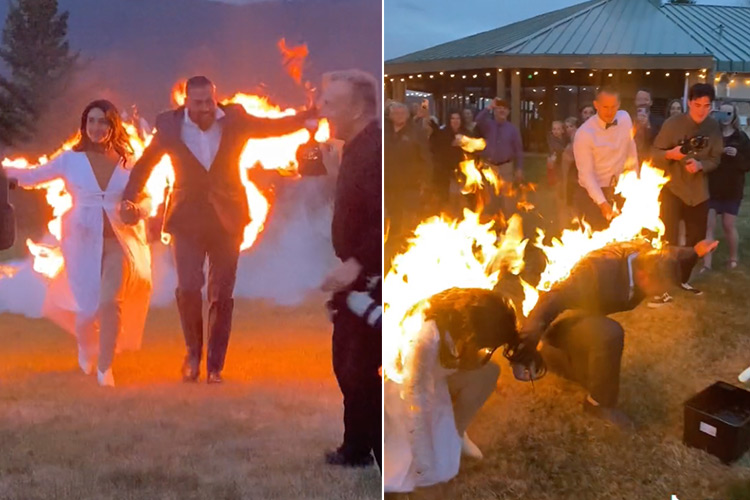 A combo image shows Gabe Jessop and Ambyr Bambyr on fire during the wedding ceremony.

In the manner of Hollywood movies, an American bride and groom set themselves on fire during their wedding ceremony, in order to impress the guests, and make it an unforgettable day, according to media reports.

They met each other while working as stunt people on the set of Hollywood films, which means that daring acts run in their blood and is the basis of their work.

While reviving their wedding this week, the duo decided to end it by mixing business with pleasure.


Russ Powell, the wedding photographer, posted a video on "Tik Tok" of the newlyweds setting fire to their bodies, and titled it "When People Marry with a Bold Act."

Commenting on the video, the photographer warned against imitating this scene at home or at wedding parties, saying, "Do not try to do this, as the newlyweds are trained to do these jobs and are professionals in their performance."

The groom replied, “His wedding will be one of the top 10 weddings of all time.”

The video clip showed the bride Ambyr waving a bouquet of burning flowers, and soon the flames spread on her back and the groom's back, as they continued walking, waving to the wedding guests who could be heard cheering.

When the newlyweds reached the end of the ramp, they knelt on the ground, while two men put out the flames burning in their backs with fire extinguishers. 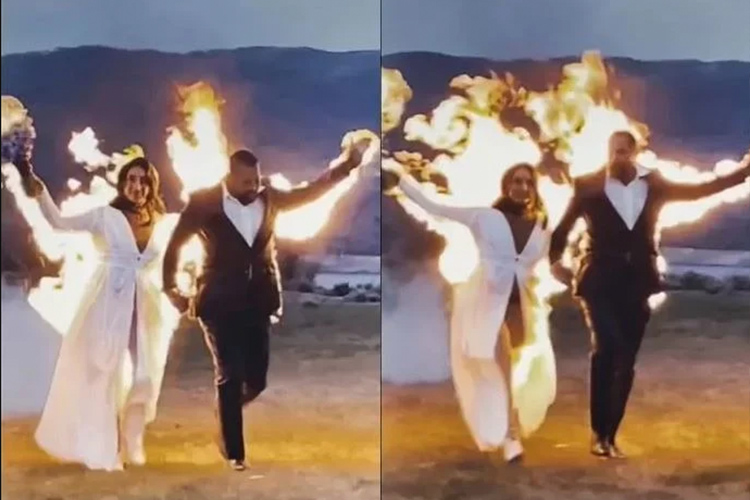 The video on "Tik Tok" achieved more than 14 million views, and received millions of likes and thousands of comments.

Some of those interacting with the video expressed their concern about the bride after her hair caught on fire.

Photographer Powell responded to them in a comment, "The newlyweds put an anti-burning gel on their bodies, and the bride was wearing a wig."

Others interacting with the video expressed their admiration for the common qualities between the newlyweds, and wished them success in their marriage.

“They made an event for themselves, this is a one-of-a-kind wedding,” one respondent said.

Wedding photographer Kate Day recently told Newsweek that the closing moment of the wedding is the culmination of what has been a magical day, a fun way to end the evening and conserve energy, and a last chance to get great photo ops, rather than just ending it with the last song.