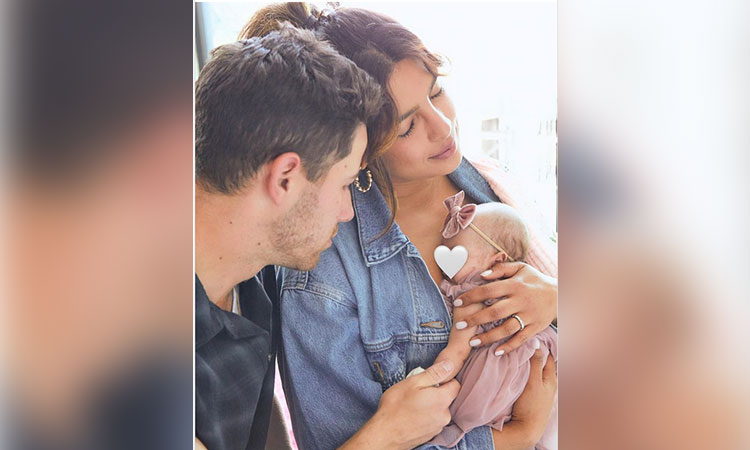 Priyanka holds her daughter as Nicke looks on at their home. Instagram photo

Bollywood actress Priyanka Chopra and her American pop-star husband Nick Jonas have shared the very first glimpse of their daughter, Malti Maria Chopra Jonas, on the occasion of Mother's Day.

Priyanka and Nick Jonas welcomed Malti Marie back home after she spent over three months in the Neonatal Intensive Care Unit (NICU).

In the picture, Priyanka can be seen holding her baby in her arms while her Nick is looking at the little one. The actress did not reveal the face and added a heart emoji on the baby's face.

Priyanka wrote in the caption: "On this Mother's Day we can't help but reflect on these last few months and the rollercoaster we've been on, which we now know, so many people have also experienced. After 100 plus days in the NICU, our little girl is finally home. 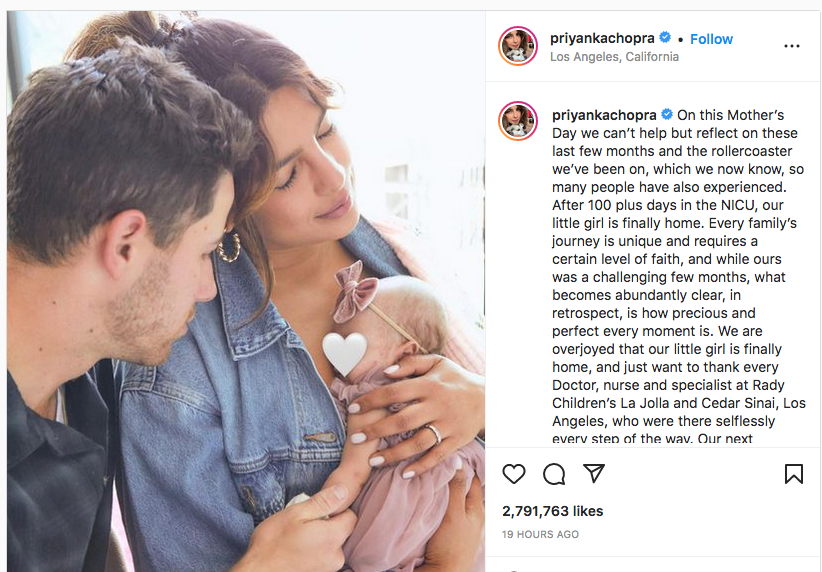 "Every family's journey is unique and requires a certain level of faith, and while ours was a challenging few months, what becomes abundantly clear, in retrospect, is how precious and perfect every moment is.

"We are overjoyed that our little girl is finally home, and just want to thank every Doctor, nurse and specialist at Rady Children's La Jolla and Cedar Sinai, Los Angeles, who were there selflessly every step of the way. Our next chapter begins now, and our baby is truly a bada**. Let's get it MM! Mommy and Daddy love you.

"Happy Mother's Day to all the mothers and caretakers in my life and out there. You make it look so easy. Thank you.A Also.. there is no one I'd rather do this with than you. Thank you for making me a mama @nickjonas I love you.A Ps- thx @divya_jyoti masi for the picture and @akarikalai masi."

Nick also shared the same picture along with a lengthy note.

The couple decided to have a child via surrogacy and announced their daughter's birth on their Instagram pages on Jan.21, welcoming their first child together.

The Quantico actor opened up about the personal struggle her family has been through this year, implying that Malti has not been home since her birth. Chopra didn't go into detail of her daughter's condition, only revealed that she's been in the NICU.

On the work front, Priyanka will next feature in a Hollywood rom-com titled 'It's All Coming Back To Me' and Farhan Akhtar's 'Jee Le Zaraa' co-starring Alia Bhatt and Katrina Kaif.

The couple tied the knot in 2018 after dating for four months. They had been dropping hints about their future plans long before they took action — Pryinka had told The Sunday Times in January 2021 that she wanted a large family. Nick Jonas gushed about his wife and their future as parents, telling Extra in February 2021, “We’d be blessed with any child, son or daughter or anything. Just knocking [on] wood that it happens.” 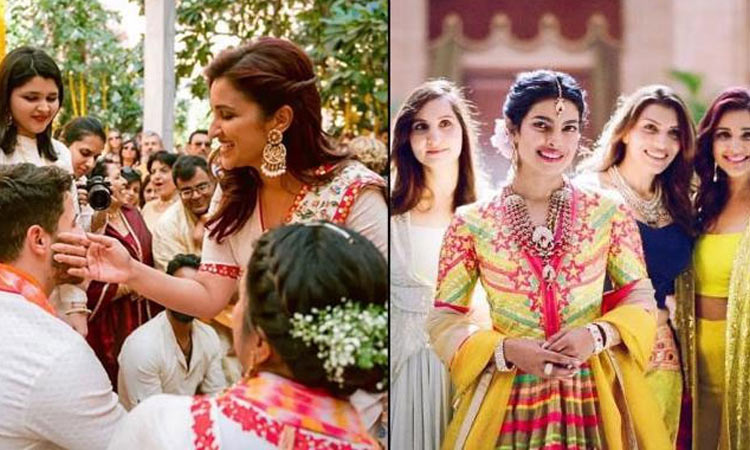