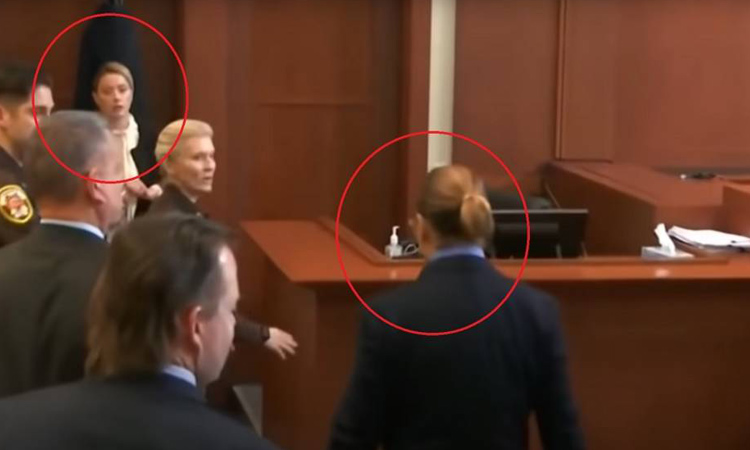 A videograb shows Amber Heard staring at Johnny Depp in the court.

A video of the American actress Amber Heard recoiling in the courtroom after locking eyes with her ex-husband, the famous actor Johnny Depp, was widely circulated on social media sites.

The incident happened after she finished her session in the court in which she slammed him, according to court documents.

In the video, Amber is seen descending from the witness stand, in front of the jury, as Depp heads with his lawyer to her place. But Amber suddenly retreated quickly upon seeing him, and showed fear of Deep's attack on her, which caused the guards to intervene to prevent them.

But Depp himself appeared surprised by her behavior, raised his shoulders in surprise, and walked away from her way to his lawyer.

Heard's reaction caused controversy on social media sites, as Twitter users saw that she was "a great exaggeration" of her fear, while another confirmed that "Amber deserves an Oscar for her acting," while others expressed their disbelief in this scene.

Other users reported another scene from a previous session of the trial in which Heard appeared to walk confidently in front of her ex-husband without any signs of fear.

The case of Depp and Heard receives the attention of the international media, as Heard accused her ex-husband of brutally assaulting her several times, and of being jealous of his fellow actors, and demanded compensation of $100 million, while Depp denies all these accusations, accusing his ex-wife of distorting his reputation, also demanding compensation of $50 million.