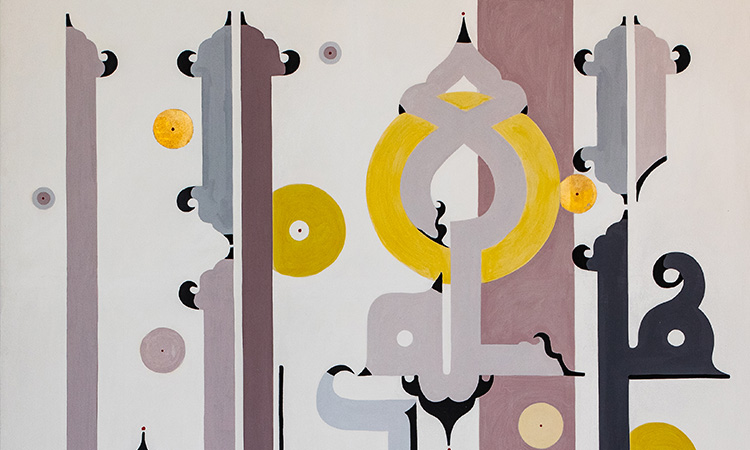 This Ramadan, Oblong Contemporary Gallery, Dubai, is presenting Iranian artist Abol Atighetchi (Mar. 31 – May 30). For the first time, a series of 12 unpublished paintings are being exhibited to the public.

It covers more than 31 years of Atighetchi’s artistic career, spanning 1991 to 2022.  Some of the early paintings are ‘Les Iroquois’ (painted 1991), showing the artist vision of the Red Skin Indian American tribes located in North America, specifically in Canada; a canvas on ‘Mururoa’ and two paintings on ‘Rainbow Warriors’, the ship by Green Peace. There is a large acrylic piece on Qur’anic Illumination, done from the artist’s point of view. Calligraphy painting is being shown too, where viewers can admire the influence on the artist by the great Persian poet, Maulana Jalal ad-Din Muhammad Rumi.

Born in Teheran in 1948 in a well-known family, Atighetchi finished his primary school in Tehran and was sent to complete higher education in Switzerland, and later to a boarding school in England, where he graduated with a B.S.C. degree as an aeronautical engineer from Queen Mary College, University of London.

He studied Fine Arts at Midwest City College, USA and Solihull College, UK. When he lived in France from 1983 to 1992, he painted a series of figurative paintings called “Nouvelle Figuration”.

He preferred to keep the collection hidden - until he decided to bring them to light with a newly started collaboration with Oblong Contemporary Gallery in Dubai.

The artworks from this period represent Atighetchi’s interpretation of different cultures of the world. He shows how he viewed the ancient populations in North and South America, African tribes, in Papua New Guinea and the Far East.

In 1996, his work took him back from the Nouvelle Figuration to his roots, and he was induced to follow his love for calligraphy inspired by Rumi, in another stage of his artistic evolution. 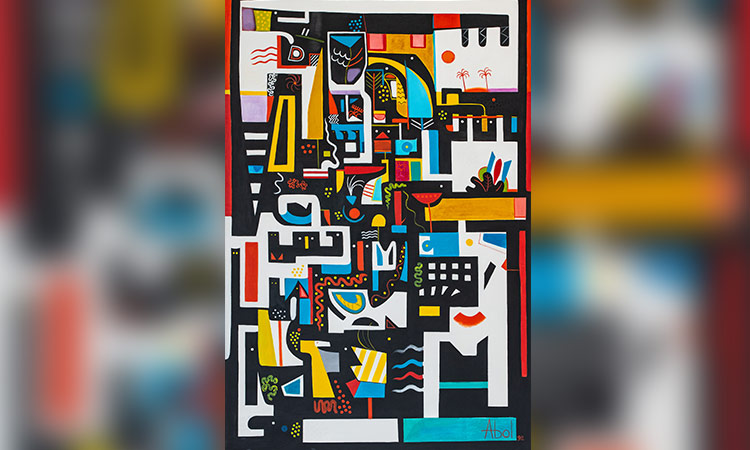 The difficulties he faced when he took up calligraphy painting primarily lay in the issues of composition and colouring, and in finding balance and harmony. Calligraphy is a sacred Islamic art and Atighetchi took up the challenge to master it with confidence, without formal school training. He began with verses from the Quran and mastered the Thuluth and Naskh styles of writing.

He then went on to the Nastaligh style, which is a Persian style of calligraphy, and then modern calligraphy. “Calligraphy is an Islamic art that I have mastered,” he says, developing his own style. He combines the use colours with large dimensions and deep compositions; black is no more predominant. Atighetchi paints calligraphy also on wood, where he uses lines and dots to ornament the background.

His French paintings were done in a completely different style which explore the thinness and thickness of black lines.

Since 1987, he has been regularly participating in auction sales at the Art Drouot, Bonhams and Sotheby’s, besides other online auction domains.  Among the works of his snapped up at auction is “Hamd Alla”, which realised $3,600 at Bonhams Dubai in 2009.

A “huge admirer” of Rumi, who has been an enormous source of inspiration to him, he has dedicated many of his calligraphy works to him. He has been a member of Maison des Artistes, France, as well as the Iranian Artists Forum, Iran, since 1979.

The time he came of age as an artist was the 1960s, when the twin movements of Pop and Minimalism emerged alongside each other. Perhaps this prompted him to move to minimalism, and he traced his journey from figurative paintings to calligraphy and minimalism in an interview. 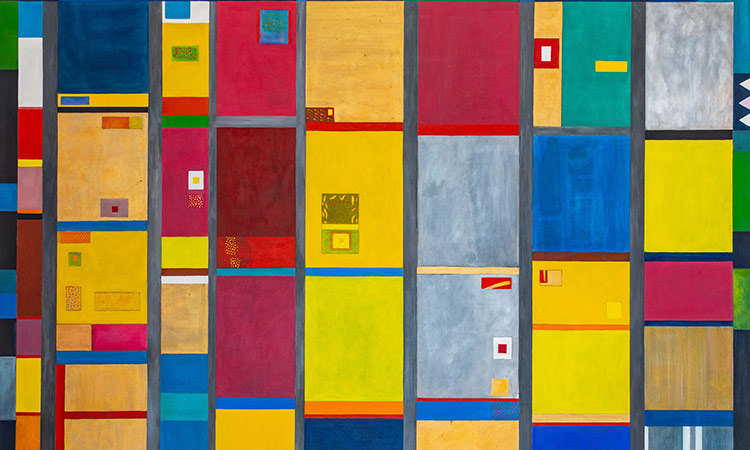 “I started with figurative paintings and a friend of mine in France suggested I participate in auctions in Paris,” Atighetchi recalls. “I took part, sent three paintings and sold all three. From there, a gallery owner purchased 10 paintings from me every year - and that’s how I got started.” He continued painting and selling and after 10 years in France, he returned to Iran. He discovered an attachment to calligraphy, and its lines attracted him.

He uses plentiful lines in much of his work. His affaire de coeur with lines led him to look into the movements of the pen. Thus he taught himself calligraphy - even the techniques were self-taught. It was his way or no way.

“My first calligraphy paintings were not so good,” he recalls. It took him around three years till he was confident that his calligraphy works stood up to scrutiny.

He confessed that the move to minimalism was difficult. According to him, one cannot use too many details in a composition: much has to be said with little. Therein lay the challenge.

A success in whatever he did, he is for staying with minimalism, since the field is vast and life is limited. Meanwhile, he is content that he has explored fields such as calligraphy, post-modernism, figurative and minimalism.

How many can claim this success? Oblong Contemporary is an Italian art gallery specialising in international Contemporary Art. Established in 2019, it collaborates with talents by providing them a local and international platform and by ensuring value across its locations in Dubai and Forte dei Marmi, Italy.  It is committed to creating an arena for culture, and functioning as a bridge between Italy and the UAE.