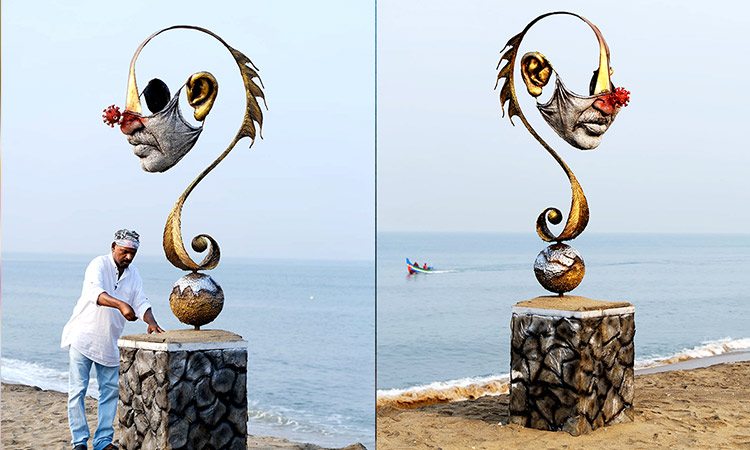 Davinci Suresh on location in Kerala.

He was an honoured guest at the recently concluded World Art Dubai festival, where he displayed his amazing talent, which primarily consists of creating portraits of celebrities and eminent personalities, from ordinary material.

He has created, thus far, 2D/3D installations in 80+ mediums in 80+ installations in the past 20 years. Among them are a 3D portrait-installation of international footballer Lionel Messi, who is shown with jerseys, footballs, caps, gloves, stumps and other sports accessories and a 25’x15’ portrait of veteran Bollywood actor Amitabh Bachchan, made from cloth masks.

Sharjah shines with the spirit of Ramadan with inspirational events

He has also done a Kerala Flood sculpture, which was auctioned and the amount raised donated to Kerala Chief Minister’s Flood Relief Fund in 2018.

Other popular works include those relating to heath and sanitary awareness during COVID-19 pandemic, which was composed through a series of paintings and sculptures. An artist who creates magical art with material such as pebbles and broomsticks, he finds profound beauty in the works of Nature.  His youth itself paved the way for the future painter Suresh. In the 10th grade, he won first place in six categories of painting and second place in one category. Coming to be known by the name of the family-owned advertising agency, Da Vinci, Suresh says his elder brother, Unnikrishnan, was his first guru or teacher.

The artist’s perspectives have changed as he evolved. For twenty years, he worked with mobile sculptures: his occupation then was sculpture. He became famous for making moving and gigantic sculptures for various institutions in the States of Kerala, Karnataka and Tamil Nadu, in India.  A decision to bring diversity through painting was then made: it made him draw 100 paintings in 100 different media. A composition of his, the fire-painted tiger, won much applause. 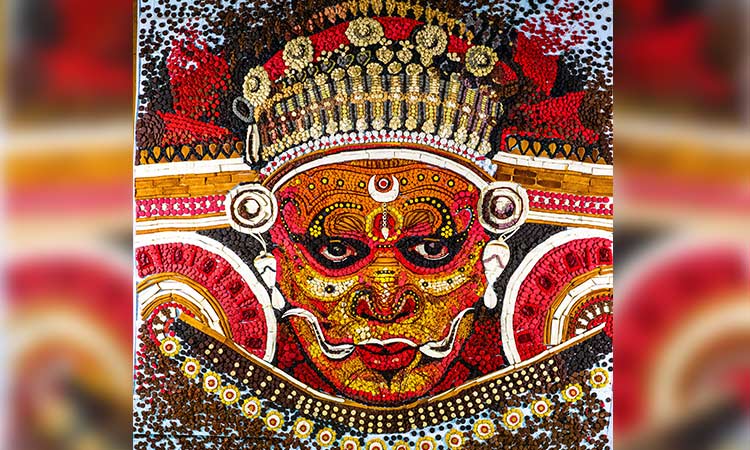 In addition to relatively common mediums such as pencil drawing, clay, watercolour, oil painting, candlelight and fire painting, he turned to 3D painting and optical illusion painting. He is continually in search of new painting techniques and it is a matter of pride and joy for him that he has painted in a wide variety of media so far.

Here are some of them: Mahatma Gandhi from agricultural paddy; Indian actor Tovino Thomas from corn; actor Prithviraj from cobblestones and pieces of wood; freedom fighter Abdul Rahman Sahib, with books; Indian President APJ Abdul Kalam with gold ornaments; Ruler of Fujairah with marble brought from 14 countries in Fujairah; Messi, made with sports equipment; actor Kalabhavan Mani made with Wayanad coffee beans (Wayanad is a district in Kerala State); dance form Kathakali made with clay; and musician Naushad Ali, painted with cloth …

Suresh has won many awards in appreciation of his talent. He holds a record for making a figure of Mahatma Gandhi, whom he calls the “light of the world”, from the light of 1,500 lamps. The composition was 150 feet long.

He reacts against social problems that disturb his mind, with art. It began in 2012, with Nirbhaya incident in India, when he paid a tribute to a girl who had been gang raped and murdered, in New Delhi. Suresh set up a 50 feet long sand sculpture at Azhikode beach, Kerala, depicting the victim’s suffering. He also composed a clay sculpture of the Kathua gang rape victim, in Jammu and Kashmir.

He went on to create a statue of Madhu, who was beaten to death by a mob in Kerala, in 2018. Madhu was a 30-year-old tribal man from Kerala’s Attappadi region, who collapsed and died inside a police jeep as he was being taken to a hospital. He had been attacked by a mob, which accused him of theft. What has shocked Kerala were the photographs that surfaced on social media, which were reportedly taken just before he was assaulted with sticks. A sand sculpture of the Mullaperiyar issue (controversy over sharing waters of the Mullaperiyar river between Kerala and Tamil Nadu); a “Corona sculpture” at Azhikode beach; a cartoon wall painted in various parts of the State, to create awareness against the spread of Corona, are also among his creations. Born in 1974 in Kodungallur, Thrissur district, Kerala, Suresh is a Member of the Executive Committee of the Kerala Cartoon Academy. He has written and composed over twenty songs, acted in five short films and handled art direction in four films. He has worked as an art director and actor in Asianet’s (Kerala’s leading TV channel) cinematic comedy shows, as well as taken part in technical sculpture, in star shows and professional plays. His monumental sculptures of up to 30 feet in size, have been exhibited in Kerala and various other States; they combine sculpture and modern technology.

The awards he has won include Navabhavana Award 2011; Aadarsha Devashilpi Award; JCI Arts Award; the Award from the Friends Literary Committee and the Chief Minister’s Special Award for the construction of Leader Square in Mala and the bronze statue of K Karunakaran, former Chief Minister of Kerala. He has received certificates from the Speaker of the Legislative Assembly of Kerala and the Lalit Kala Academy for his “flood memorial sculpture”.