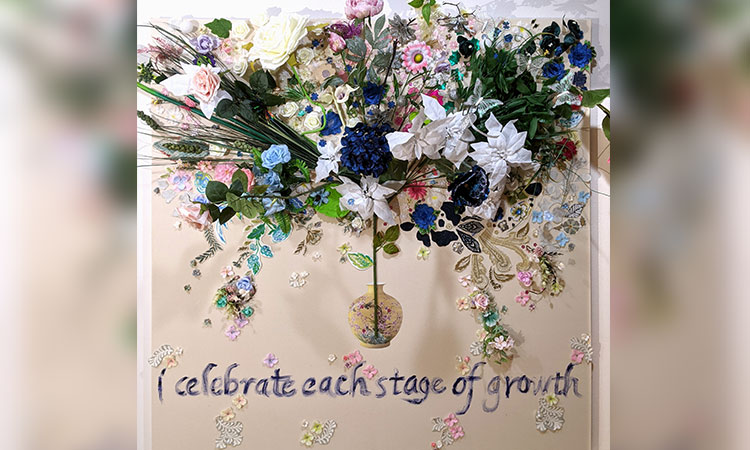 Growth Hacking, a solo show from American artist Gretchen Andrew, has been announced at Galloire (Mar. 8 — Apr. 7).Gretchen’s painting practice is mostly described as an exploration of search engine art and virtual reality, where the work hacks the art world and the internet.

She hacks systems of power with art, code and glitter and has manipulated Google, Facebook and even sought to re-programme the art world itself.

Growth Hacking presents new Vision Boards, which act as both technical vectors for a digital performance, as well as being sumptuous physical metaphors for our own financial and personal growth.

Continuing her hacks of major art institutions, including taking over Google search results for “Contemporary Art Auction Record”, her Vision Boards in this series explore the art auction system, an artist’s place in that system, and how women comprise only two per cent of the contemporary art market.

The series of works visualise how it will feel when an artists’ world and auction record dreams are realised.

Growth Hacking is a subfield of marketing which focuses on the rapid growth of a company. It rose to prominence in relation to early-stage startups such as Airbnb that needed fast growth before funding ran out.

A product of Silicon Valley herself, Andrew is famous for deploying her own methods of growth hacking through search engines, press and postal mail, which have resulted in the sort of meteoric rise known as a Unicorn in the technology industry.

The artist makes use of these symbols in her work, both celebrating and appropriating the success of the technology industry, while casting a playful and critical eye on the implications of its power and how easily one is able to manipulate it.

Says Andrew: “I believe AI is creationary, not just predictive. It creates our futures as much as it anticipates it. 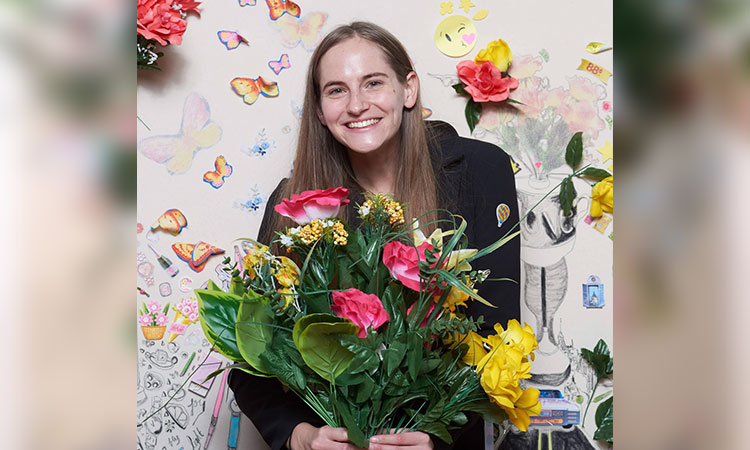 “By injecting my Vision Boards, which represent my visual hopes for the future into the developing brain of big tech’s AI, I am teaching our computers to dream wider than our current world. I am educating AI based on the world that I want, and not just the one I've lived so far.”

She adds: “In this future, women can and will make up more than the two percent of the art market they currently have. There's a lot of work to do in this area and sometimes progress can be frustratingly slow: so the works in this exhibition remind us not only to celebrate each stage of growth in the evolution of our personal becoming, but to also always look at the larger systems in which we operate and the ways in which we can hack and reprogramme them to create the world of our dreams.

“My work reverses the direction of artificial intelligence, making it a forward-dreaming tool of possibility.”

She is best known for her fun hacks on major art world and political institutions, including Frieze, The Whitney Biennial, Artforum and The Turner Prize.

In these digital performances, she reimagines reality with art and its possibilities in a new frontier. She does this by making assemblage “vision boards” that she programmes to become top internet search results.

The feminine and trivialised materials of her vision boards purposefully clash with the male-dominated worlds of AI, programming and political control they also operate within.

Since Internet technology was unable to grasp the nuance between original and facsimile, her versions popped up first when she searched for his paintings online.

In 2018, her work focused on the political and social impact of search technology, exploring the implications for AI. In 2018, she coined the term “search engine art”. In the same year, the V&A Museum released her Search Engine Art book.

Andrew grew up in New Hampshire, USA, and studied Information Systems at Boston College. Describing her degree, she has said that “Information systems is all about how companies use technology for competitive advantage ... translated into art, I’m asking how I can use information to create meaning.”

She worked in Silicon Valley at both Intuit and Google and left Google to become a painter; she developed her artistic technique by watching how to videos on YouTube.

She translates her experiences from her hands-on experience in the tech world and has developed an art practice that critiques the use of technology and the systemic issues related to it. Her paintings and search engine art are said to relate to the art world in an aspirational way.

Her work has been featured in The Washington Post, Fortune Magazine, The Los Angeles Times and The Financial Times, among others.

Galloire is a contemporary gallery and platform that aims to bring the best international talent to the Middle East and make their work available regionally, as well as provide global collectors access to new works from the world’s premier artists.

The gallery aims to bring a broader audience to art: to make discovering, connecting with and collecting world-class artists’ work more transparent and accessible, to better serve artists, existing collectors and those new to contemporary art.