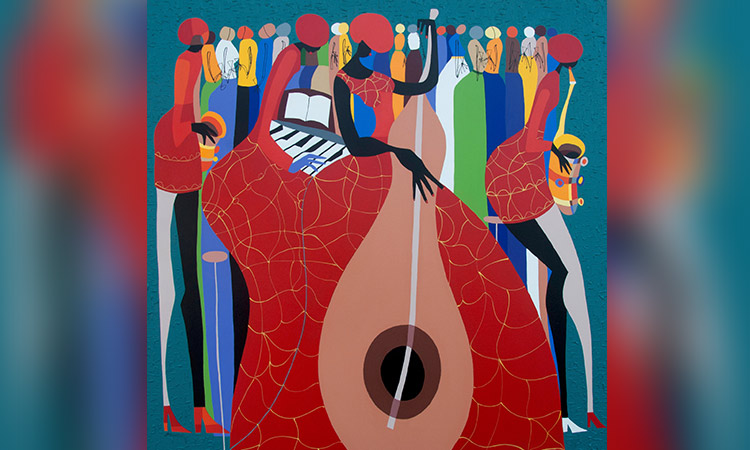 ARTIANA, the UAE’s first homegrown auction house for art and luxury collectibles, has announced the joint launch of Indian-origin, Paris-based artist Sakti Burman’s NFT-based and Ghana-born artist Kofi Agorsor’s exhibitions titled “Mythical Metaverse and The Colours of Life” (Mar. 9 – 31) at its gallery space in Damac Park Towers, Dubai. The exhibition combines the physical and the virtual, with science and technology serving as intermediary.

Burman’s (b. 1935) NFTs are based on his paintings which were in the oil on canvas medium; they are now are being introduced in their digital versions.

Ghanaian painter Agorsor’s (b. 1970) work stands as joyous expressions of colour and form. He is known for using bold and vibrant colours to portray the daily lives of people in modernising Ghana.

Netflix suspends service in Russia amid invasion of Ukraine

In the 1970s, Burman began experimenting with marbling effect works; by the 1980s, he had mastered the technique and it became his signature series. Burman’s defining oeuvre owes largely to his technique of marbling, which he arrived at after years of experimentation.

In 2015, he completed his final series of paintings employing the marbling process, making his work more collectible and coveted. His work has been offered at auctions multiple times, with realised prices ranging up to USD3,30,000, depending on the size and medium of the artwork.

Burman’s paintings often evoke a surrealist feel, referencing multiplicities of time and place. His art draws extensively from Hindu and European mythology, as well as from his own memories.

Suggesting surrealism, the paintings are populated by humans, animals and cityscapes that are dreamlike in appearance. Burman’s lifelong dedication to painting is like the continuous musing of poets, intent on unveiling, little by little, from one thought and anecdote to another, the Sanskrit notion of “Maya” or indescribable divinity, and its ultimate influence behind the creative endeavour.

Here is an artist who happily looks on the past with the eyes of the present, which for him is a recurrent continuum, like the greatest of all narratives - one’s own life story.

Burman is the recipient of The Prix des Estrangers, Ecole des Beaux-Arts, Paris, 1956; Knight of the Legion of Honour, Government of France, 2016; and Medaille d’Argent au Salon de Montmorency, France.

His most recent solo shows are a retrospective at the Lalit Kala Akademi, New Delhi and Mumbai; Victoria Memorial Hall, Kolkata; and Dakshina Chitra, Chennai, among others. 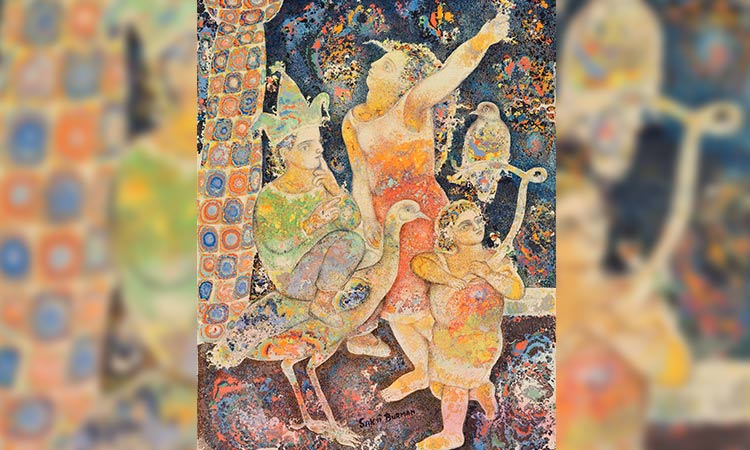 Agorsor is a painter, sculptor and musician, born in the Volta region of Ghana. He studied Architecture for two years, before switching to Art at the Accra Ankles College of Art, where he obtained his degree in 1989.

Often in animated dynamics that is striking and modern, his canvases can be sparsely populated or they may be crowded. His works are often rendered in a gestural and semi-abstracted manner, and woven with visual stories, as rich as the African culture that serves as his inspiration.

In his paintings, he uses pulsating colours that become an interpretation of the essence of lived experiences of Africans and the world at large. His subject matter borders on the generic; but is rendered often in a buoyant, semi-abstract and witty manner.

His canvases may be sparsely populated, often with a solitary figure in a sensuous pose or two lovers enjoying each other’s presence. Or they may be very populated, being inhabited by crowds of market women or glitterati at social events.

Some of the canvases may be adorned with splashes, drips and flows of paint that intertwine to become forests or mazes of enchantment. “On the soil of Ghana, I had a dream. When I woke up, I found myself permanently in Gagahuli, Ouida, in the Republic of Benin. This is how art is for me.

“It is a constant battle between the material and the spiritual. To be an artist doesn’t just mean painting, playing music, sculpting or even acting; it also means opening up to such ideas as preserving and developing one’s spiritual cultural heritage into Science and Technology,” Agorsor says.

His work is generally about love and affection: about simple everyday situations such as relationships, music, religion and being at peace with one’s self and the world at large.

Some people have commented that his work has characteristics that can be likened to a European or American’s interpretation of African life. Some would say it is the work of an African, interpreting the contemporary concerns of the age. Yet others say the work is universal.

“I feel very universal,” Agorsor concludes. “I am always happy as an artist. Art makes me see both in the physical and the spiritual. The purpose of art then is about brightening the corner where you are.

“The purpose of art is to be sound in mind, body and soul. It’s not about what others are doing or what someone decided. Art does not depend on someone prescribing a mainstream system. Art is freedom.”

Founded by Lavesh Jagasia, art connoisseur and luxury aficionado with more than three decades of experience in the field of Indian art, ARTIANA attempts to bridge the gap between the traditional and the NFT art worlds.

Its recently opened NFT department is a place where digital artworks are selected for their rarity and significance. ARTIANA also shows works from artists working in physical mediums.