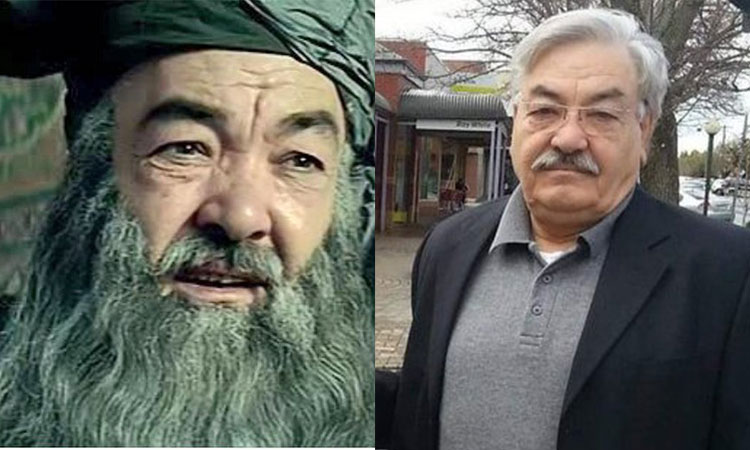 Veteran Pakistani actor Rasheed Naz passed away in Islamabad on Monday, his family has confirmed. The actor was 73. The actor had been suffering from health issues for a long time, local media reported.

His actor daughter Madiha Rizvi posted the news on her Instagram account. Sharing a picture of Naz, she penned, "Our dearest Baba Rashid Naz Has left this world peacefully this morning. Please recite Surah Fateha for the departed soul." 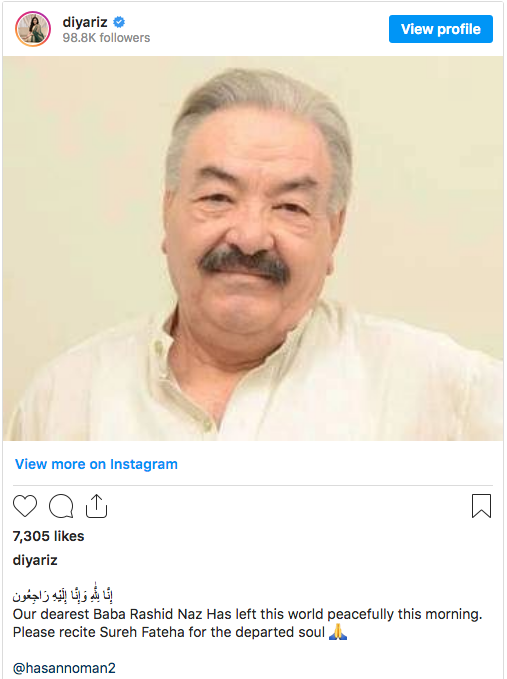 Naz's son Hasan Noman said the veteran actor had been suffering from several health issues for a long time and had been receiving treatment at a hospital in Islamabad where he passed away on Monday morning. The actor's body was brought to Peshawar for his funeral which was held late on Monday at the Eidgah Colony on Charsadda Road in Peshawar. His funeral was attended by many members of the showbiz fraternity. 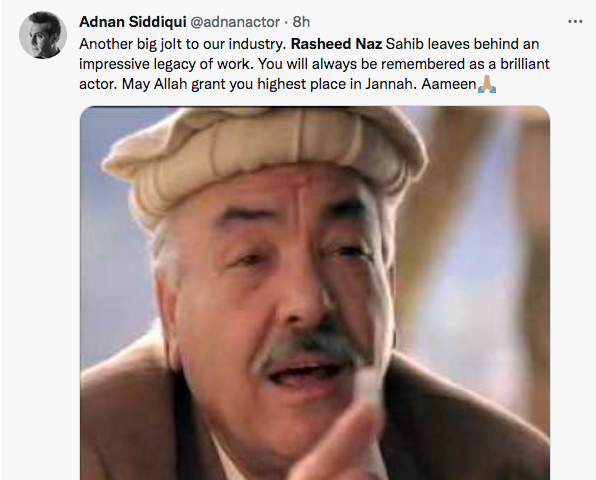 Actor Adnan Siddiqui took to Twitter to reflect on the actor’s demise, writing, “Another big jolt to our industry. Rasheed Naz Sahab leaves behind an impressive legacy of work. You will always be remembered as a brilliant actor. May Allah grant you highest place in Jannah.” 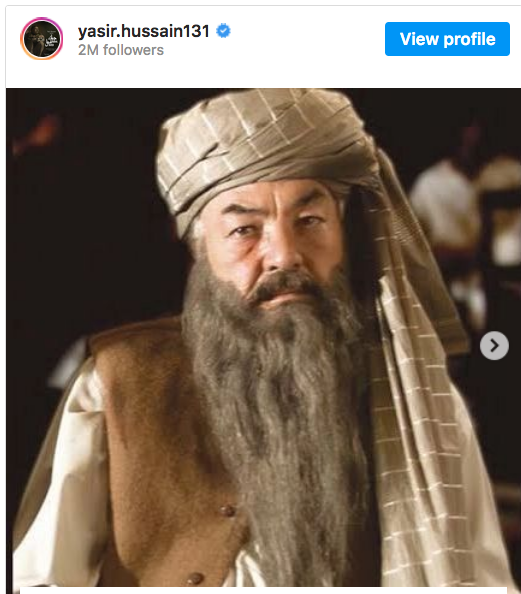 Actor Yasir Hussain posted a note in the actor’s memory on Instagram, remembering his time working with Naz in the 2015 film Karachi Se Lahore. “I wrote that role especially for [Naz]. Thank you, Wajahat Rauf, for casting [him] and giving us the opportunity to work with a legendary actor. [He] will always stay alive in our hearts.” 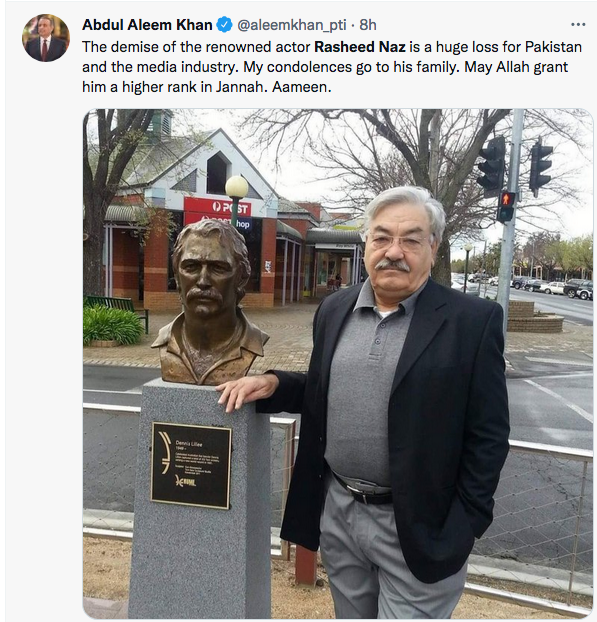 Another PTI politician and Senator Faisal Javed Khan also took to Twitter in the actor’s memory. He tweeted, “May Allah rest Rasheed Naz Sahab's soul in peace and give his family and friends enough strength to cope with this loss. He was one of [the] remarkable Pashto, Hindko and Urdu language actors of Pakistan. His work in Shoaib Mansoor's Khuda Kay Liye was outstanding.” 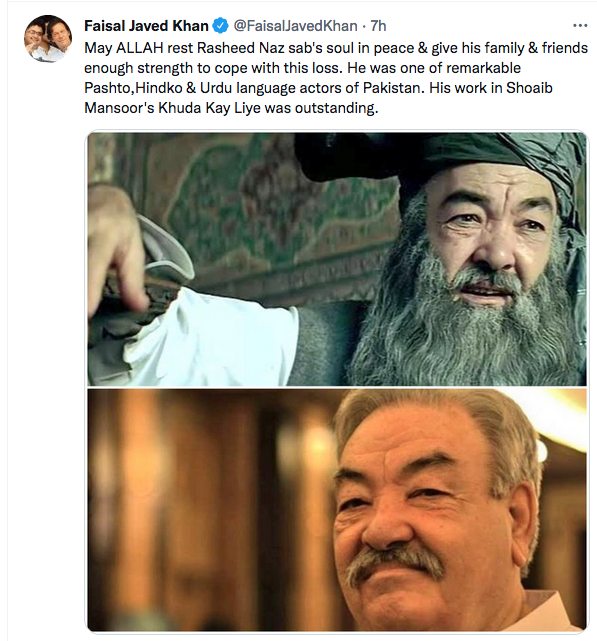 Rasheed Naz, born in Peshawar in 1948, had a fruitful career of over forty years. In 1971, he started his television career as an actor in Pushto television play. His first Urdu play was “Aik Tha Gaoon” (1973). His first popular play was “Namoos.” He also worked in Pakistan's first private television play “Dasht,” telecast on N T M. The celebrated star has worked in several Pashto, Hindko and Urdu language plays. 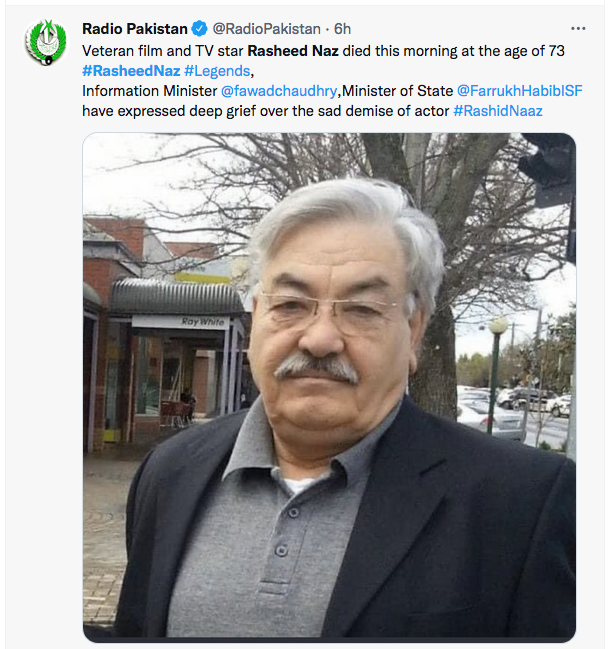 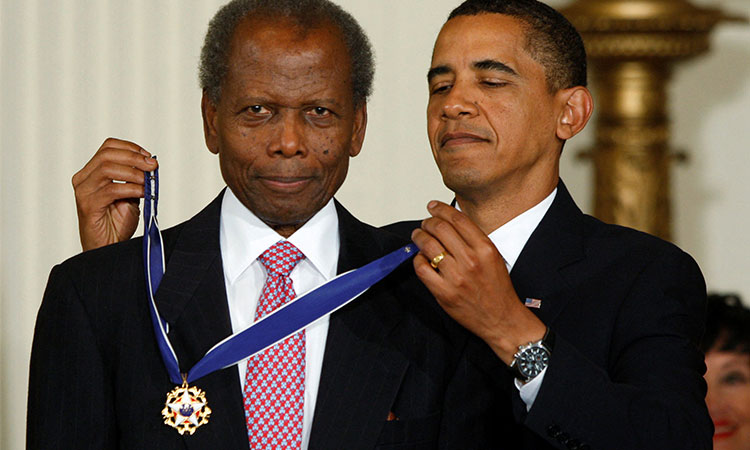 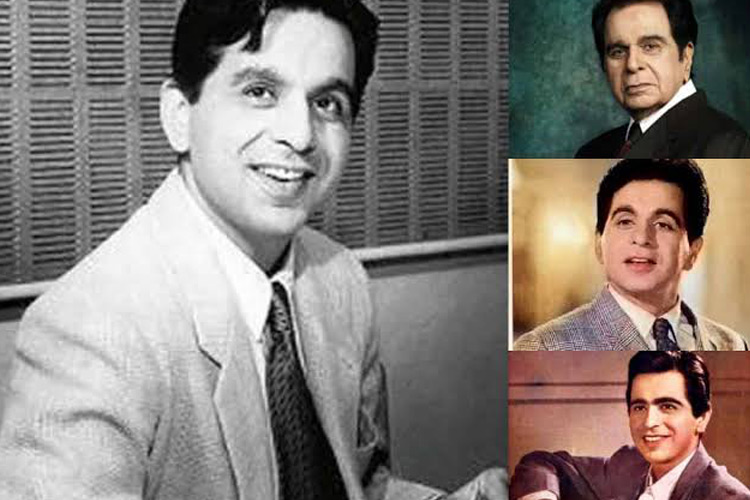