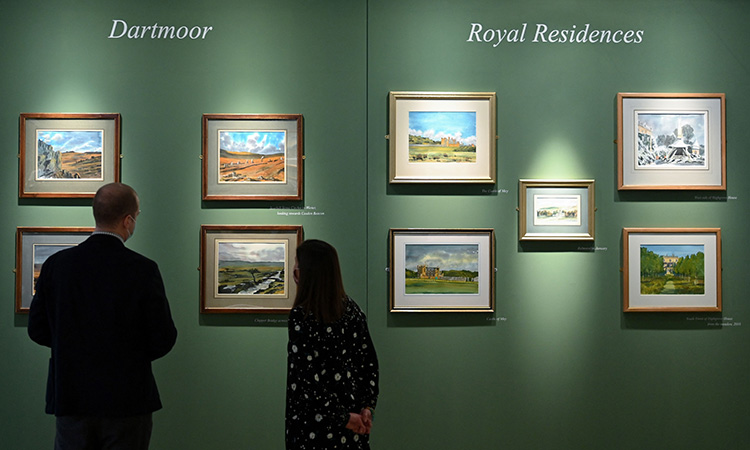 The largest collection of watercolours by Queen Elizabeth II’s eldest son and heir, Prince Charles, have gone on display in Britain. The 79 works feature snow-capped Scottish mountains and the Welsh countryside, French Provencal peaks, Mount Athos in Greece and the Transylvania region of Romania. The 73-year-old Prince of Wales’ paintbrushes have also captured the Swiss alpine resorts of Klosters and Saint Moritz, as well as the French chateau of Le Barroux. Mountains are a favourite, particularly Beinn a’Bhuird in the Cairngorms of northeast Scotland, which he has painted several times at different times of the year from several angles.

As he explained in notes accompanying the exhibition, which runs until Feb.14 at the 19th century Garrison Chapel at Chelsea Barracks in London, he chose watercolour because he found photography “unsatisfactory”. “It all requires the most intense concentration and, consequently, is one of the most relaxing and therapeutic exercises I know,” he wrote.  “In fact, in my case, I find it transports me into another dimension which, quite literally, refreshes parts of the soul which other activities can’t reach...

“I am under no illusion that my sketches represent great art or a burgeoning talent! They represent, more than anything else, my particular form of ‘photograph album’ and, as such, mean a great deal to me.” Charles, the most senior royal after the 95-year-old Queen, has found time in his schedule of official engagements over the last 50 years to paint some 680 watercolours. He has sometimes signed them A.G. Carrick — a pseudonym created from the initials of his other given names Arthur and George, and one of his titles, the Earl of Carrick. 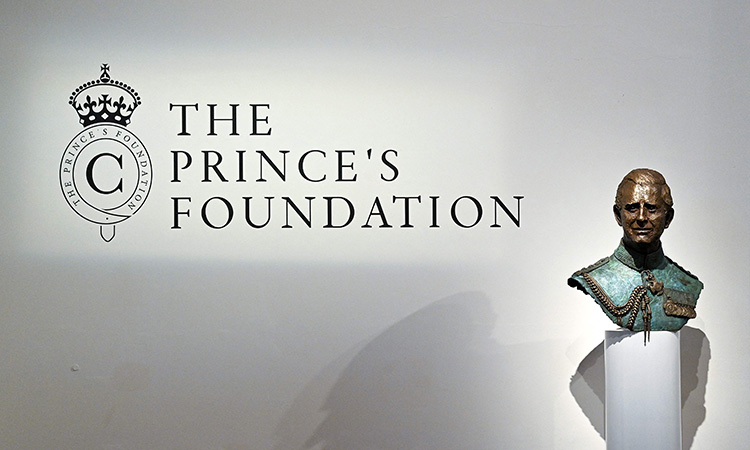 A bust of Britain’s Prince Charles, Prince of Wales is pictured at an exhibition.

The exhibition’s curator, Rosie Alderton, said Charles came from a “lineage of artists”. Charles’ father, Prince Philip, who died last April aged 99, was a prolific painter, as was queen Victoria, who reigned from 1837 to 1901, and until Queen Elizabeth II, was Britain’s longest-reigning monarch.

All profits from sales go to the Prince’s Foundation, which organised the Garrison Chapel exhibition, said Alderton. Fifty of Charles’ watercolours were previously exhibited at Hampton Court Palace in 1998 to mark his 50th birthday. Another 30 were put on display by the National Gallery of Australia in 2018 for his 70th birthday. Since 2019, the Prince has had little time to indulge his passion for painting. But Alderton said she hoped he will pick it up again, even when he becomes king. “His art works are really lovely and it would be a shame if he didn’t,” she said.

Meanwhile, three new photographs of the British royal Kate, Duchess of Cambridge, were released by Kensington Palace on Saturday to mark her 40th birthday. The soft-focus portraits by veteran Italian fashion photographer Paolo Roversi will go on tour around Britain this year before being added to the permanent collection of the National Portrait Gallery, of which Kate is the patron. Kate joined the royal family in 2011 when she married Prince William, Queen Elizabeth’s grandson and the second in line to the throne, in a glittering ceremony believed to have been watched by hundreds of millions across the globe. 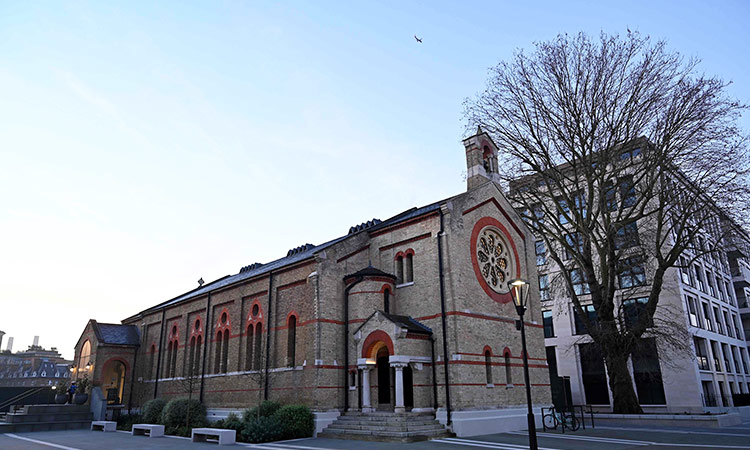 The Garrison Chapel, where an exhibition is being shown. AFP

One of the photographs shows a profile of Kate looking off to the side in a white gown similar to a wedding dress, while her sapphire engagement ring — formerly worn by William’s mother, Princess Diana — is prominently on display. Another — the only one of the photographs in colour — shows Kate in a red gown turning towards the camera with a broad smile. The third photograph shows Kate in a frilly white top, again smiling at the camera.

The three photographs, which have neutral, non-descript backdrops, were all taken in November at the botanical gardens in Kew, west London, Kensington Palace said.

The portraits will go on tour to Berkshire, southern England, where Kate grew up; St Andrews, Scotland, where Kate met William at university; and Anglesey in Wales, where the couple lived while William served as a helicopter search-and-rescue pilot at a royal Air Force base on the island.

Polls suggest that the future king and queen, who have three children of their own, are now the most popular royals behind the 95-year-old monarch.

According to media reports, Kate will celebrate her landmark birthday on Sunday with just family and close friends because of the current wave of COVID-19 which is spreading across the country fuelled by the Omicron variant.

Charles, Prince of Wales was born on Nov.14, 1948 is the heir apparent to the British throne as the eldest son of Queen Elizabeth II. He has been heir apparent as well as Duke of Cornwall and Duke of Rothesay since 1952 and is both the oldest and the longest-serving heir apparent in British history. He is also the longest-serving Prince of Wales, having held the title since July 1958. Upon the death of his father, Prince Philip, on 9 April 2021, Charles also inherited the title of Duke of Edinburgh.

Charles was born in Buckingham Palace as the first grandchild of King George VI and Queen Elizabeth. He was educated at Cheam and Gordonstoun schools, both of which his father attended as a child. He later spent a year at the Timbertop campus of Geelong Grammar School in Victoria, Australia. After earning a Bachelor of Arts degree from the University of Cambridge, Charles served in the Royal Air Force and Royal Navy from 1971 to 1976. In 1981, he married Lady Diana Spencer, with whom he had two sons: William and Harry. In 1996, the couple divorced.