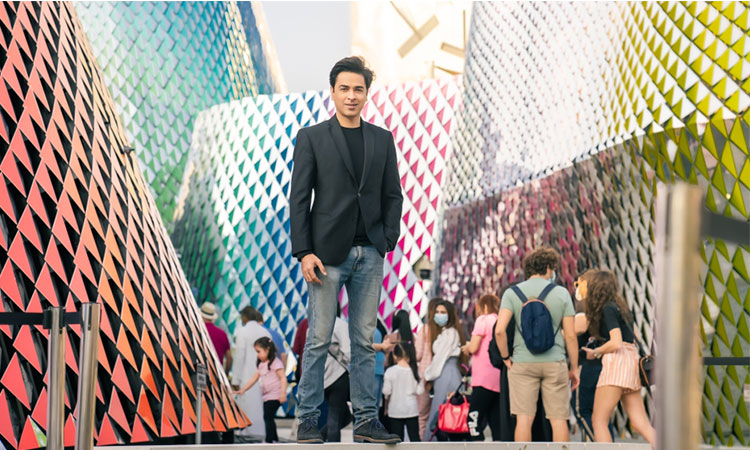 Shehzad Roy poses for a photo during his visit to Pakistani Pavilion at Expo 2020 Dubai.

Expo 2020 Dubai, the largest cultural gathering in the world, has not only mesmerised the common man but also the top celebrities from all across the globe who have heaped praise on the mega event.

Head of states, politicians, sports stars, artistes, musicians and prominent activists are among many others who have graced the Expo 2020 Dubai in the recent past and several renowned personalities are expected to attend the event in coming months.

Shehzad Roy, one of Pakistan’s top pop stars, singer, songwriter, guitarist, activist and social worker who visited the Expo 2020 Dubai said: “This is truly larger than life. To be here at the Expo is an experience, which I can’t really express in words. Words become a barrier when you’re trying to express what you’ve seen. It’s so beautiful.”

“The whole concept is great. And I am really missing my family because I really wanted them to come and witness. Many Pakistanis often talk about Pakistan, and how some things in the country never seem to change, I really want them to come to Dubai and see this Expo because it’s beautiful and what Pakistan Pavilion has put up here is phenomenal. It really shows the country’s potential,” he told Gulf Today.

Roy, in addition to his music career, has also been a prominent name in several humanitarian causes in Pakistan.

Roy said that he has been raised by his parents to care about others, and hence it was only certain that he, too, would be drawn towards that path. He is the founder of a charitable organisation Zindagi Trust, which is working to educate underprivileged children by offering them monetary incentives to attend school. The trust is also working to abolish corporal punishment in Pakistan and introduce a curriculum that teaches children how to save themselves from sexual abuse.

Roy said music is a powerful medium to spread the good word, and his fame in the industry, gives him an opportunity to take over some of the government schools in Pakistan and turn them around.

The singer has been awarded with the prestigious Tamgha-e-Imtiaz and Sitara-e-Eisaar awards by the government of Pakistan.

He was recently appointed as Goodwill Ambassador to United Nations Office on Drugs and Crime (UNODC) and since then has been working on creating awareness about drug abuse amongst youth.