Palestine is the toast of the season at Abu Dhabi Art 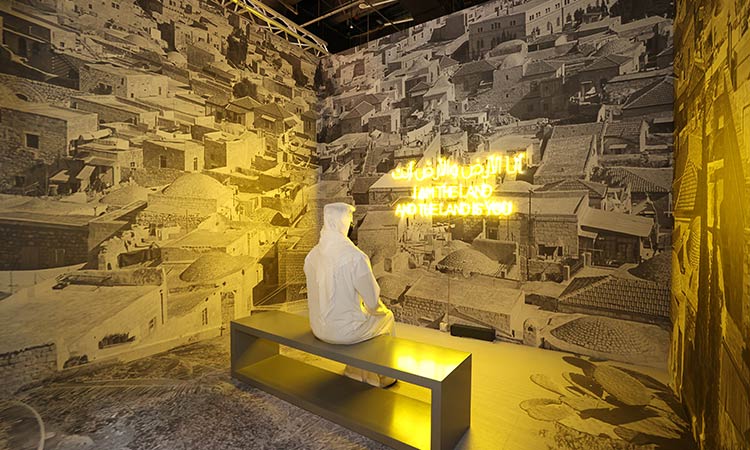 Maraya Art Centre, Sharjah, the non-profit creative initiative by Sharjah Investment and Development Authority (Shurooq), that supports emerging artists in the region, is participating in Abu Dhabi Art with a work titled “I am the land and the land is you”.

The artist is Hazem Harb. In the immersive installation, Harb asks the viewer to step through a wall of empty olive oil containers. The cans speak of the importance of olives as building blocks for Palestine’s agriculture, and are a symbol of the country’s identity.

On one hand, olive trees serve as a source of income — liquid gold. On the other, they are a quintessential symbol of the country’s resilience and continuity, not least because of their longevity. The artist also reveals a photograph from his archival collection that attracts the viewer with a vast landscape of the city of Jerusalem in 1920, inviting him to his homeland, Palestine.

The illuminated words “I am the land and the land is you”, written in 1988, a verse from Palestine’s national poet Mahmoud Darwish, addresses the universal notion of belonging to a country, despite being apart from it. The installation coincides with the artist’s solo exhibition titled “Hazem Harb. Temporary Museum. 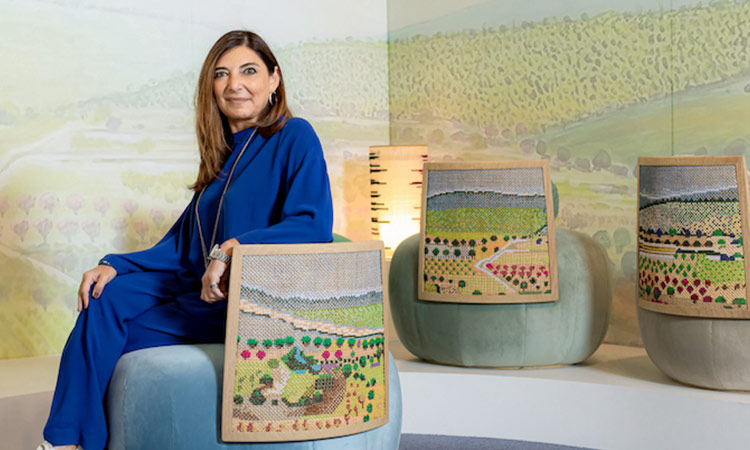 Titled ‘On Belonging’, it is a culmination of a six-month project inspired by Palestinian artist Nabil Anani’s ‘In Pursuit of Utopia’, which is a picturesque portrayal of his imagined homeland envisioned as one immaculate landscape, without division or disruptions. The collection features seven crafted pebble chairs and straw lamps, handstitched and signed by the refugee artisans employed by 81 Designs.

As an ode to the Golden Jubilee of the UAE, the seven pieces also represent the seven Emirates: while the craft revives a sense of belonging connected to the culture of Lebanon, the art pays homage to the land of Palestine.

It brings together artists and artisans, creators and designers, to weave together design, craft, art and culture, by revolutionising the use of traditional embroidery, Tatreez.

We are very proud of what these ladies have achieved.” Nadine Maalouf, Co-founder of 81 Designs, said: “Our mission is to narrate the artistic tale of old traditions.

Our collaborations allow us to empower the refugee artisans we employ by providing them with sustainable jobs.” “My work is about identity, restoring and elevating traditional craft and instilling a sense of belonging.

The works are visual representations of icons portraying Palestine, the yearning for freedom while offering, in some instances, a critique of the political impasse. Alhroub’s artworks revolve around the holiness of the olive tree as a political symbol and as a representation of the Palestinian people and the Palestinian question. Jerusalem is the focus of Radwan’s artworks.

Using charcoal, acrylic, and gold leaf on canvas, he attempts to reveal the contradictions of the holy city. The ceramic works by late Bader (1955 — 2003) inspired by Islamic Art, are also on show. Hourani’s acrylic on canvas works ‘This is not a Watermelon’ are representations of the colours of the Palestinian flag in the form of a watermelon.

The series was created based on the historical ban of the use of Palestinian flags by Israelis in the 1970s and 1980s. Artworks carrying the flag colours were illegal, even if they were images of a watermelon. Salameh’s (1944 — 2018) artwork on view is also an abstract of what looks like the old city of Jerusalem during a sunset scene.

In ‘Fabric of Land 1 & 2’, Anani observes the landscape through paintings, illustrating terraces of the Palestinian hills with trees of various shapes and colours. Barakat manages to create a haven of conversations between figures appearing in his artworks.

They look like ghosts of men, women and children and appear in motion against a bluish background, as though in the pages in a book of mystical tales. Umm Al Emarat Park, Abu Dhabi, in collaboration with the Abu Dhabi Art, is hosting a live performance art piece by artist Rand Abdul Jabbar titled Act II: The Climbing Vine, taken from the series Every Act of Recognition Alters What Survives.

The installation — which was originally commissioned for the 2021 Shubbak Festival in London and installed in the city’s oldest botanic garden — has been re-imagined for Abu Dhabi Art to be displayed within the grounds of the Park’s Botanic Garden and Shade House. The installation, which will be on view from November 17 — December 31, explores the role of memory in relation to place and history.

A live performative reading of The Climbing Vine, a personal text written by Entissar Hajali, London-based Syrian writer and performer, will be held on December 11, for a duration of 30 minutes. The performative reading is also being recorded and activated through a QR code for visitors to enjoy. A free workshop by the artist will also take place at the Park on December 5.

The Ministry of Culture and Youth is collaborating with Abu Dhabi Art to showcase a selection of Al Burda Award winning entries from the previous years, at Abu Dhabi Art Fair. The collection features Islamic Art from various genres such as ornamentation and calligraphy.

Noura bint Mohammed Al Kaabi, Minister of Culture and Youth, said: “Showcasing some of the best pieces from the Al Burda collection in Abu Dhabi Art reaffirms our trust in this international platform that brings the best of art from across the world.

” Building the momentum further will be Abu Dhabi Art Fair’s participation in Al Burda Festival to be held December 19-21. Al Burda Festival will host an exhibition of selected artworks from the Fair, reinforcing the collaboration between the two entities.