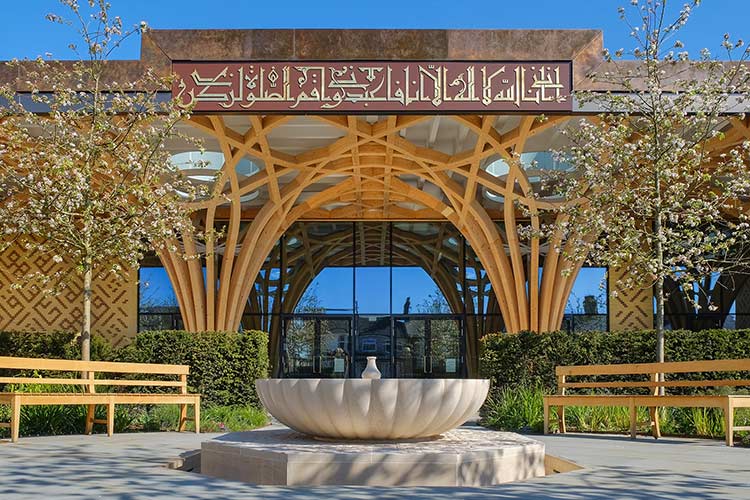 The facade of Cambridge Central Mosque.

The Cambridge Central Mosque has been shortlisted for the 2021 RIBA (Royal Institute of British Architects) Stirling Prize, the UK’s most prestigious architecture award. The Prize, to be announced October 14, is given to the architect of the building thought to be the most significant of the year for the evolution of architecture and the built environment.

It is the job of the jury to visit each of the six buildings on the shortlist to decide which will be crowned winner.

This year’s Jury Chair is Lord Norman Foster, Founder and Executive Chairman of Foster + Partners, a global studio for architecture, urbanism and design, rooted in sustainability.

The Stirling Prize jury changes each year and always includes a representative from the most recent Stirling Prize-winning practice; this year, Annalie Riches, co-founder of Mikhail Riches, joins the panel.

The Lay Assessor is British artist, Dame Phyllida Barlow. With a career spanning nearly six decades, Barlow takes inspiration from her surroundings to create imposing installations that can be at once menacing and playful. 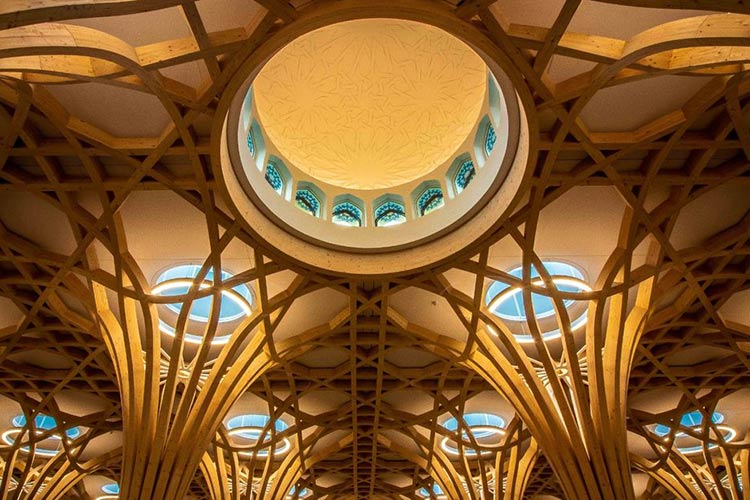 The ceiling of Cambridge Central Mosque.

The final jury member is RIBA President, Simon Allford, who started his two year term on September 1, 2021. Allford is a founding director of AHMM (Allford Hall Monaghan Morris architecture practice, where he leads a design studio of 200 architects), a frequent writer, critic and adviser, a visiting professor at Harvard, a previous chairman of the Architecture Foundation and currently a trustee of the London School of Architecture and the Chickenshed Theatres Trust.

The judges will be advised by Mina Hasman acting as Sustainability Expert. Hasman leads Skidmore, Owings and Merrill’s sustainability and wellbeing operations and long-term vision.

She has experience in a wide variety of projects in Europe, UK, Middle East, and Asia, bringing a greater understanding of the implications for sustainable and equitable design in different climatic, social, and regulatory contexts.

RIBA Chair of Award Group Jo Bacon said: “This year, the Stirling Prize shortlist represents the value and diversity of architectural invention. Our members are exploring structural and environmental challenges to deliver civic places of value to our society.

“Each one of these projects has delivered best in class environmental standards while creating extraordinary architectural solutions appropriate to their context.

“Our jury members recognised that these projects had a vision that was reflected in all aspects of the design. They demonstrate architectural and conceptual ambition while offering delight to both the owners and their visitors.”

About Cambridge Central Mosque, RIBA comments that “the urban intervention of inserting a mosque capable of welcoming 1,000 worshipers within a low rise, residential neighbourhood, without dominating it, is masterful.

“Its presence is clear but modest, considering the size of the mosque relative to the two storey terrace houses around it. This is achieved by setting it back from the street, progressing through the Islamic garden, then gradually increasing in scale to the front portico, atrium with cafe to one side and study centre to the other, through to central ablution areas. The building then rises at the rear to the largest mass of the prayer hall, which shifts in geometry to face Mecca.”

Marks Barfield Architects, who designed the mosque, says that the concept was of a mosque as a calm oasis within a grove of trees. “We were inspired both by Islamic and English religious architectural traditions. Above all, we sort to develop the idea of a British Mosque for the 21st century,” they say.

The defining feature of Cambridge Central Mosque is its timber structure. The timber columns, or ‘trees’, reach up to support the roof using an interlaced octagonal lattice vault structure evocative of English Gothic fan vaulting, famously used at the Kings College Chapel, Cambridge, nearby.

The timber is sustainable sourced spruce, which is curved and laminated. Roof lights are located above the trees, creating a prayer hall bathed in light.

The external walls are clad in tiles of the traditional Gault colour with castellated parapets that symbolise the meeting of heaven and earth. Worshippers and visitors take a journey from the street through an Islamic garden, to a covered portico and into an atrium, preparing them in a gradual transition for the contemplation of the prayer hall.

“Social and environmental sustainability were central to the competition-winning scheme and have been delivered,” RIBA finds.

“The intent was to produce a building in accordance with the spiritual belief that humanity’s role is as a responsible custodian of nature, meaning, one should minimise their carbon footprint.

“The building has achieved net zero carbon energy on site in use. The competing elements of the demand for car parking to suit large events with elderly congregations, creating an underground car park and the environmental consequences of embodied carbon, have been recognised.”

Water consumption was found low, meeting the RIBA 2030 Climate Challenge target and confirmed by meter readings. “In the water-stressed area of East Anglia, this is particularly important,” says RIBA. Therefore, Cambridge Central Mosque is a demonstration of how architecture can embody religious and cultural philosophy and traditions while utilising sustainable and contemporary materials, it concludes.