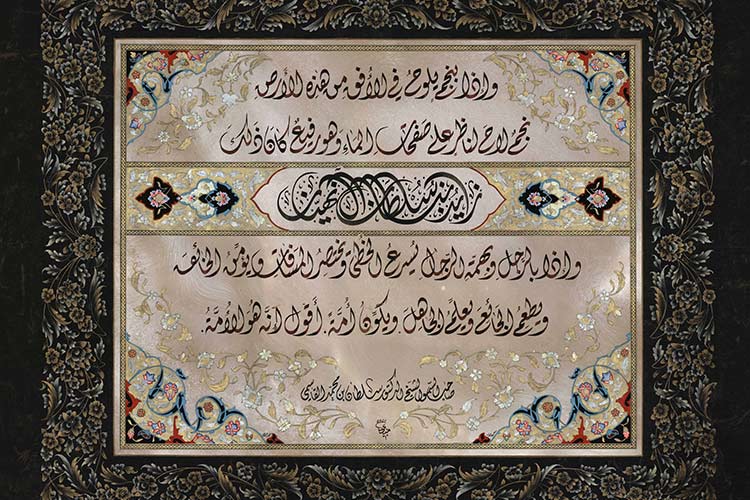 The show was inaugurated by Sheikh Salem bin Abdul Rahman Al Qasimi, Chairman of the Sharjah Ruler’s Office, and Manal Ataya, Director General of SMA, in the presence of the artist and a number of calligraphy enthusiasts and artists. Titled ‘Luminous Letters’, the three-month long exhibition features over 60 works by Mandi, including one that shows his lettering of the word ‘Sharjah’, in 42 different forms.

Mandi’s works in a wide range of decorative mediums are inspired by his local surroundings between the past and present, and also include sayings of His Highness Sheikh Dr Sultan bin Muhammad Al Qasimi, Supreme Council Member and Ruler of Sharjah. “This exhibition celebrates one of the most prominent calligraphists in the country; his mastery and creativity are unique, giving him a large fan base,” said Ataya.  She said that the event is part of SMA’s mission to support professional and talented artists from the region, and to provide them with opportunities through exhibitions.

“Calligraphy is part of Islamic culture, and through Sharjah Calligraphy Museum, the only such museum in the region, we aim to educate visitors about the importance of preserving this distinguished art form, and passing it on to future generations via our children and family programmes,” she added.  The exhibition displays highlights of the artist’s practice and career path, which began with studies in Cairo and Istanbul, where he was mentored by the famous calligrapher, Hassan Chalabi. He is sharing his “Al-Hilyah Al-Sharifah” painting as part of the exhibition and displaying his diploma and the licences he gained in Thuluth, Naskh, Diwani and Jeli Diwani calligraphy styles. 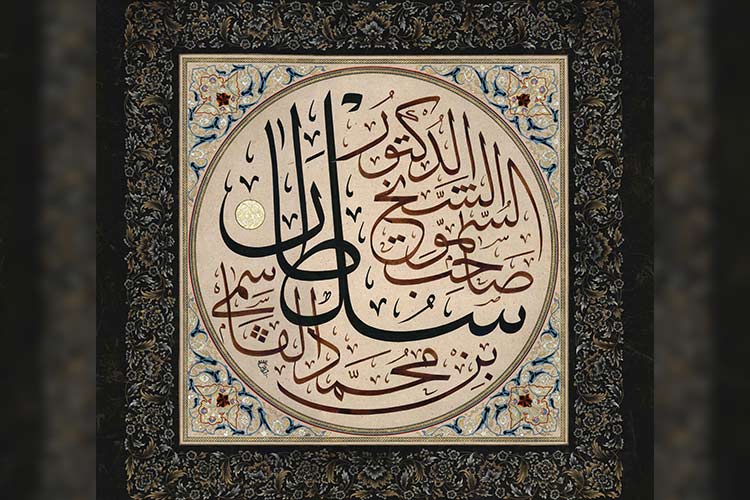 Further, paintings that carry famous sayings of the late Sheikh Zayed bin Sultan Al Nahyan and those by His Highness the Ruler of Sharjah, are among the exhibited works.

Mandi was born in 1953, began his journey with calligraphy in 1975, taking after his father who was also an artist. “Calligraphy highlights the Arabic handwriting, and the creation of movement in letter forms to produce creative paintings,” he said. He is recognised internationally for an individual style that combines letters and words to form three-dimensional images and figures.

Working with different shades and colours, he overlays the lettering in a laborious process that can take years to complete a singular work. By building up the surface in layers, he transforms the two-dimensionality of script into a vibrant, multi-dimensional composition. The result forges the textual with the visual, the literal with the symbolic, and the representational with the abstract. For the artist, calligraphy is the art of the soul. Fascinated by the beauty of calligraphy as a child, he enrolled in the Arabic Calligraphy Improvement School in Cairo, graduating in 1977.

He continued his training in Turkey during the 1970s under Chalabi. In the 1980s, he returned to the United Arab Emirates, where he has since designed calligraphy for the logos of government ministries, private companies and commercial establishments. Mandi’s distinctive angular designs are found on banknotes in the UAE and Bahrain, and on passports in the UAE, Bahrain, Oman, Qatar and Kuwait. One of his most notable accomplishments is as one of the designers of the interior calligraphy in the Sheikh Zayed Grand Mosque in Abu Dhabi. Mandi lives and works in Abu Dhabi.

Speakers discussed a number of topics, including humanitarian action from a youth perspective, the importance of humanitarian action, personal experience in humanitarian work and its impact on both individual and practical aspects. The role of cultural institutions in supporting and inspiring young people to engage in humanitarian work was also highlighted. SMA has dedicated a section for volunteers, for both staff and people wishing to voluntarily work in museums. It organises numerous activities and events throughout the year, cooperating with many voluntary entities and teams, supporting youth volunteer teams.

It has launched an array of voluntary initiatives and campaigns for its staff, such as the “Ramadan Aman” campaign of 2018, which was organised by Al Ihsan Charity Association.  SMA has taken part in Sharjah Voluntary Work Exhibition at the University of Sharjah, which targeted university students and those interested in voluntary activities, and the Volunteer Exhibition at the Higher Colleges of Technology in Dubai, while its staff participated in the Ramadan Iftar initiative at an Old People’s Home-care institution. The International Youth Day, which was endorsed by the UN General Assembly in 1999, aims to bring youth issues to the attention of the international community and to have their voices heard.  The World Humanitarian Day was designated as such by the UN General Assembly in 2008 to raise awareness about humanitarian assistance worldwide and to inspire humanitarian action across health, science, environment, service and relief sectors.