Envoys to eternity is composed in acrylic on canvas.

Viewers across the globe will have the opportunity to virtually enjoy the event, as it will be held in a 3D format, using cutting edge technology @ https://www.andakulova.com/virtual-tours.  Jalal and Umarbekov have had a huge impact on Uzbekistan’s cultural heritage. They are noted for their special sense of colour and a historically developed love for national arts and crafts. The traditions of multinational Uzbekistan are reflected in their paintings and for both of them, Uzbek culture is the quintessence of the panoramic cultures of Central Asia. Jalal, with a career spanning over 50 years, during a period of enormous cultural and historical changes in Uzbekistan, is considered one of the leading figures of art in Central Asia.

Afghan pop singer Aryana flees to US amid Taliban crisis

He is credited for the reinvigoration of the mural genre and in helping shape a new cultural and artistic landscape. His monumental murals draw inspiration from disparate sources such as Renaissance art, European modern masters, Mexican muralists and frescoes of the ancient site of Afrasiab in Samarkand. He is also known for illustrating Uzbekistan’s national currency. He has crafted murals for the theatres and state institutions in his country. There are also frescoes by him located all across Uzbekistan and Europe. He uses colour and the symbolic language of lines and fluid forms, to enquire into abstract art.

His abstracts are vibrant surges of energy and expressionistic — almost astrological figurations, evoking a sense of freedom, eroticism and mystery. The principles of abstraction follow in the path of the Malevitchian pursuit of a ‘non- objective’ painting. On another hand, his visual language is rooted locally within Central Asia and is inspired by a form of Oriental mysticism, which casts the material world as illusory fiction. A master painter and nationally acclaimed graphic artist, Jalal is considered a living legend in Uzbekistan. 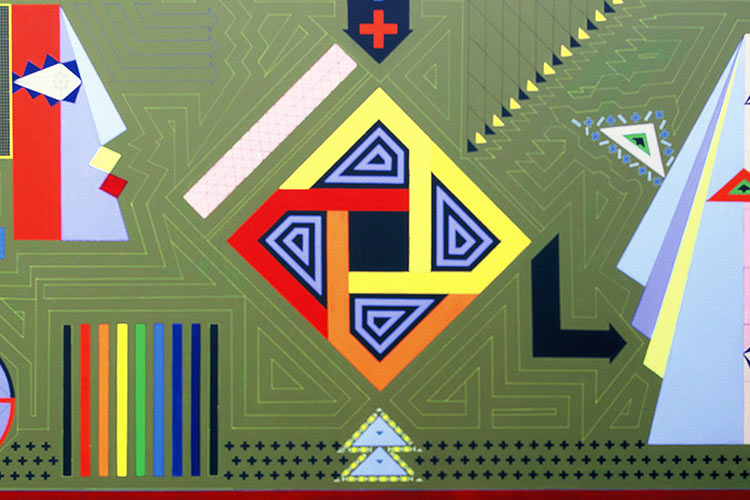 Rotation towards Harmony is the title of this work.

The works featured by Andakulova Gallery demonstrate his energetic experimentation and pioneering desire to communicate beyond cultural boundaries and even his own preconceptions. Even at age of 73, he enthusiastically uses the new technologies to convert his artworks into digital art: several of his works are in NFT format. Jalal’s work is collected by renowned international institutions and private collections, including the British Museum, Modern Art Museum in Moscow and the National Gallery of Uzbekistan. “I have seen Western modernist art in Russian museums and also Renaissance art. But I have always tried to develop my own distinct style, which is rooted in my Uzbek heritage,” he says.

Umarbekov is one of the key figures of contemporary art in his country. His artworks are nurtured by the rich cultural and historical tradition of the Uzbek people, which he reflects in his paintings. He is the People’s Artist of Uzbekistan, an active member of the Academy of Arts of the Republic, a full member of the Academy of Arts of Kyrgyzstan and Ukraine and Professor of the National Institute of Arts and Design named after K. Behzad, legendary founder of the Herat miniature school.

Umarbekov offers an original interpretation of Uzbek heritage and calls for a free dialogue between the cultures of the West and the East. In all this, a creative freedom and the spirit of innovation are seen.

Many of the motives and inspirations of his paintings are taken from childhood memories and intertwined with the collective memory of the people. Since this is so, his work is intimate and understandable to many. “As a student in Moscow, I was fascinated by the variety of Eastern and Western art I saw in the museums there and did a lot of research on the styles and techniques of different artists. “But I have always tried to develop my own individual vocabulary. I have never copied any style or followed any ‘ism’. I just try to depict what I see,” he says.

His exhibitions have been held in the Tretyakov Gallery in Moscow, at the UN headquarters in New York and in the galleries of Kuwait, Japan, Austria, Germany, Turkey, China, among other places. His work is ranked among the classics. Independence Day is observed on September 1 by Uzbekistan. Uzbek culture has been formed in the course of thousands of years, absorbing innumerable traditions and customs. Uzbekistan once held great importance, for being the heart of the ancient Silk Road.

The country connected China to the Middle East and Europe. Desert citadels, ancient cities and bustling bazaars combine Uzbekistan — where UNESCO listed treasures can be found at every turn. It will be highlighted this year in the UAE, when the pavilion of Uzbekistan will be presented at Dubai Expo 2021. Andakulova Gallery, Dubai, is a contemporary art gallery whose objective is to promote Central Asia’s modern and contemporary visual arts. It serves as a platform to exhibit and support emerging and established contemporary artists from Kazakhstan, Kyrgyzstan, Tajikistan, Turkmenistan and Uzbekistan (or the ‘Stans’), across a variety of media. Founded by Natalya Andakulova, it seeks to cultivate a dialogue between Central Asia and the Middle East by re-introducing the art of the ‘Stans’ to the artistic hub of Dubai. The gallery strives to build relationships between artists, writers, specialists and collectors. 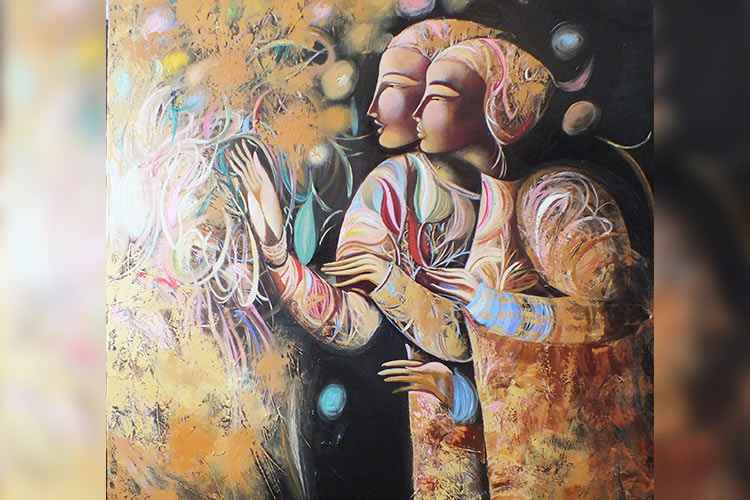 In addition to showcasing the Uzbek art for viewing pleasure, OSH is also supporting the ethnic art scene by offering diners the opportunity to purchase the pieces directly from the restaurant.