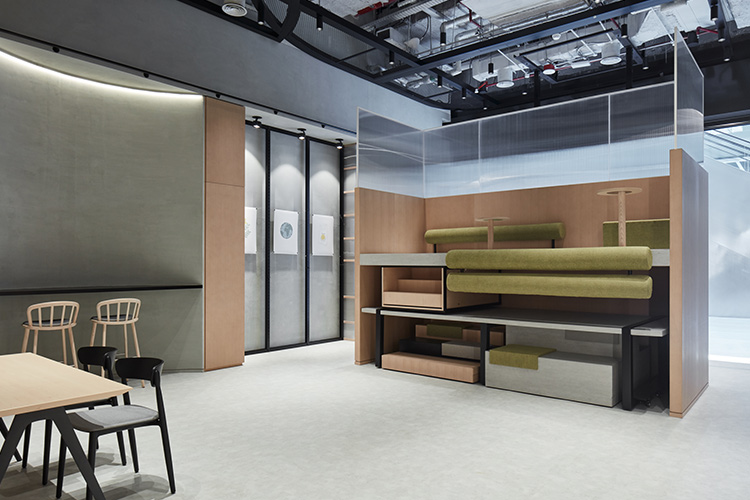 Dean, Founder and Creative Director of Roar, explains: “The brief was to create a space that would be a magnet for a diverse group of people and where professionals from the offices would interact with artists, musicians, yogis and psychology professors. “To achieve this, we created a flexible space that could morph to suit the activity, easily converting from a co-working space with shared long tables to individual work on stand-up desks, from a closed meeting room to a group collaboration.”

Thus, as soon as you clear away the tables, you have an open space for a meditation class, yoga workshop or social activity — promoting wellness was a key part of the brief. And to accommodate talks and presentations, a fold-out amphitheatre where people can watch and learn, has been designed. Ben McGregor, Investment Director at ICD Brookfield Place, said: “We want ICD Brookfield Place to be much more than just another office block — we also want it to be a vibrant social and cultural hub.

“The magic happens when the creative and corporate worlds collide, and Niche is an important part of that.” He added that “not only do we love the look and feel of Niche, the team at Roar have managed to cram so much functionality into a relatively compact space. Even with all the Covid protocols in place, it’s quickly become a magnet for talent.” 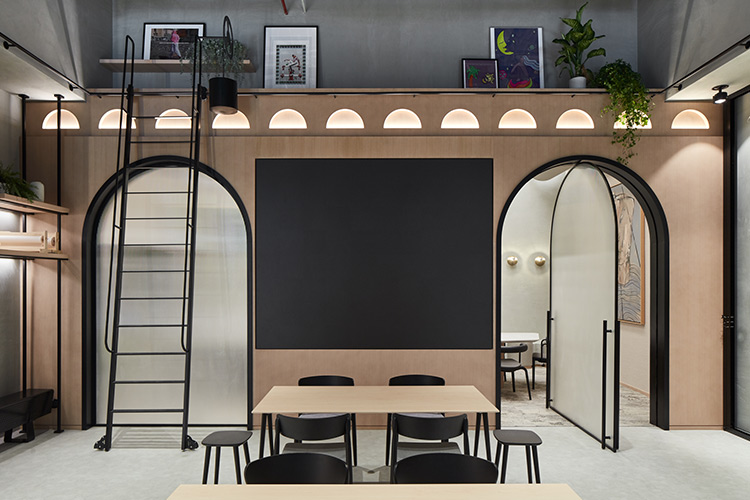 Niche has art on walls, framed by greenery.

Dubai-based Dean believes her designs reflect the influences of being born in India, raised in Dubai and working for several years in London. Having trained as an architect and a sustainability specialist, she launched Pallavi Dean Interiors in 2013. The studio was rebranded as Roar in 2018. She is an active member within the UAE design community, and writes for industry publications, assists with trade events and mentors students in the region.

Formerly interior design professor at the American University of Sharjah, she aims to incorporate practical and theoretical research into her designs. Her portfolio encompasses more than 84 projects across the region, including SensAsia Spa at The Kempinski Hotel Dubai, offices for Takeda Pharmaceutical, The Nursery of the Future and a string of private residences as well as an interactive lighting system designed in collaboration with Artemide for Euroluce 2019. Roar has won numerous awards, including CID Middle East Boutique Design Firm of the Year, and global Emerging Designer of the Year at the Frame Awards in Amsterdam.

ICD Brookfield Place is a home where majlis traditions meet knife edge art. Recently, it hosted four voices of contemporary graphic art (till Aug. 1). Shamma Buhazza (UAE), Hey Porter!(Jordan), Monna Jabali (Palestine) and Zeid Jaouni (UAE) are all graphic artists whose works have largely lived online. They were brought together and given a platform in an exhibition to focus on the contemporary poster as artform.

Through experimental Arabic typeface, abstract lettering and de-rooted symbols and references, their works are representative of undercurrents at play in the region: playful and emotionally communicative. Without the clear limits of defined place, intention, and message, they invite viewers to find and reflect on our particular place and purpose, bringing new interpretations and our own cultural and geographic specificity.

It is a fearless creative whirlpool of assemblages, forms, and colour that render Arabic calligraphy art as anything but traditional. The “Fearless Four” creatively and powerfully reject the notion of calligraphy as being something dealing with functional, static texts.

They pick apart the traditional in favour of open interpretation, free-form associations and play unbound by any one culture or geography. The works thus collectively signal more than an aesthetic or surface shift. The show was conceived in collaboration with creative director and writer Chantal Brocca, and was free and open to the public (July 1 - August 1) at The Summer Garden of ICD Brookfield Place.

Earlier, ICD Brookfield Place had presented its public art programme with Datamonolith_AI. It utilised information and data from pre-Pottery Neolithic period and meshed it with contemporary feeling, in that the former was processed through a series of algorithms.

It was an immersive story telling experience – an ancient story told through cutting edge methods – since three billion pixels and images collected from Turkey’s Gobekli Tepe archaeological site in south-eastern Anatolia were translated into illuminations.

On August 7, ICD Brookfield Place is hosting Palestinian book club Ana Min Hunak for a discussion that will centre around the book I Saw Ramallah by Mourid Barghouti. It recounts Barghouti’s return home for the first time after spending thirty years in exile. He sifts through memories of old Palestine, where he describes the joys of return intermingling with a pervasive feeling of loss. All you need to do is bring yourself, your book and any questions or ideas you’d like to discuss, says ICD Brookfield Place.