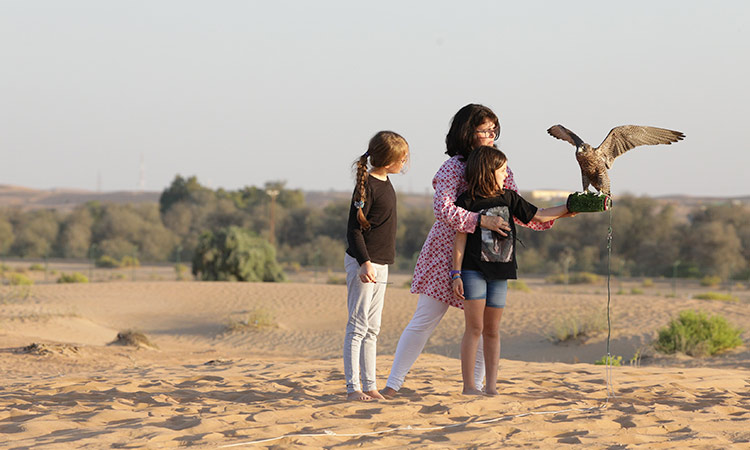 A falcon gets ready for take-off.

The Mohamed Bin Zayed Falconry and Desert Physiognomy School, in the Remah and Telal Resort in Al Ain region, is a major educational, cultural and tourist attraction in the region. The school was initiated in 2016 as the first platform of its kind in the world for teaching the art of Arabian falconry, with its initial group of students ranging from seven to 17 years old. It has been participating in major heritage events to promote its programmes, foremost of which are the Sheikh Zayed Festival and the Abu Dhabi International Hunting and Equestrian Exhibition (ADIHEX), whose next edition will be held Sept. 27 – Oct. 3, 2021.

Majid Ali Al Mansouri, Secretary General of Emirates Falconers’ Club, explained that the School aims to raise awareness of the value of falconry as part of human heritage, and to instil the correct principles and practices of this authentic Arab heritage in younger generations.

The initiative forms part of efforts to enhance channels of communication between the present and the past, and to revive the achievements of the pioneering falconer, the late Sheikh Zayed bin Sultan Al Nahyan, and his endeavours to preserve the sport of falconry and pass it on to future generations. The 2020-2021 falconry season in the UAE and many countries has been a special one. It coincided with last year’s celebrations of the tenth anniversary of the inscription of falconry on the UNESCO Representative List of the Intangible Cultural Heritage of Humanity — a process in which the number of participating countries doubled to 22. 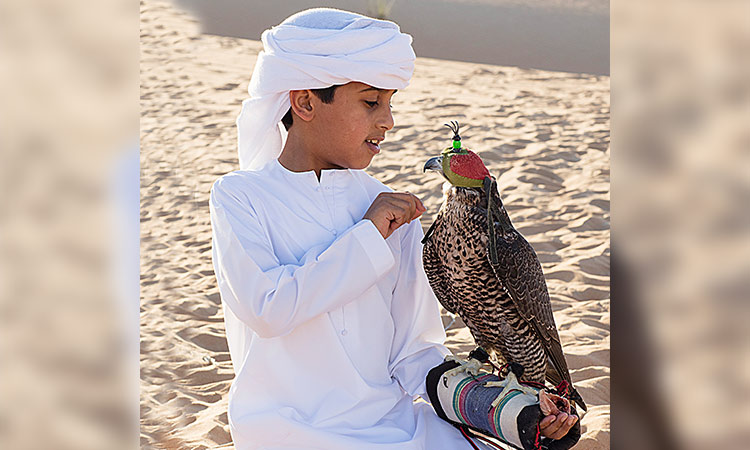 A falcon sits proudly on its perch.

The School has witnessed strong demand for its courses in the art of Arabian falconry and the traditions of living in the desert, with a total of 2,021 students enrolled (1,163 male, 858 female).

Belonging to the Emirates Falconers’ Club, it also organises dedicated programmes for tourists and VIP guests from Abu Dhabi and the rest of the UAE.

In light of precautionary measures to combat the Corona epidemic, the School has started offering e-learning courses. It offers specialised online workshops in falconry to the summer schools of the Ministry of Education. Its weekly programmes, using the latest technologies, have entered the fifth edition. This is done in partnership with the IAF School Links Programme (ISLP) of the International Association for Falconry and Conservation of Birds of Prey (IAF) and Al Dar Academy in Al Ain. The School also offers a range of educational programmes, including theoretical (types, anatomy, prey, and principles and ethics of falconry); keeping, raising and nurturing falcons; practical lessons on handling, training, breeding and caring for falcons; desert physiognomy, including protocols, sportsmanship and ethics and recognition of the importance of the houbara bird in Arabian falconry.

It organises introductory courses suitable for all ages and skill levels, tours and recreational activities for visitors, tourists and guests of the UAE, comprehensive educational programmes for school students and public and private entities, as well as family courses on traditional Arab hospitality and the experience of living and practicing falconry in a desert environment. It has a library and a collection of old and rare falconry equipment, along with an exhibition that includes unique photographs of the late Sheikh Zayed bin Sultan Al Nahyan, practicing his favourite sport. The opening of the School was announced during the third International Festival of Falconry in the UAE in 2014, with a large number of international falconers from 82 countries in attendance.

For 4,000 years, Bedouin in the United Arab Emirates and wider Arabian Peninsula practiced falconry as an important form of hunting in a resource-scarce land. Its role in society, however, has changed over time, and today it is one of the UAE’s most honoured traditional sports. Falconry’s revered status derives from the sense of courage, honour and nobility – prized traditional Arab values – that are associated with the sport, as well as its links to nature conservation, respect for animals and the camaraderie among falconers. The late Sheikh Zayed bin Sultan Al Nahyan, who practiced falconry from a young age, was a tremendous proponent of the sport of falconry and supported its conservation.

He launched many initiatives to promote the sport, including a falcon release programme and the Abu Dhabi Falcon Hospital, which has become the largest falcon hospital in the world. Every year, around 11,000 falcons are admitted for examinations and treatment. The wide patient-base extends to countries such as Saudi Arabia, Kuwait and Bahrain, besides the UAE.  Falconers use special handmade equipment, including a leather hood, to cover the head and eyes of the falcon, when it is not flying. A leather forearm guard is worn by the falconer as a perch for the bird between hunting and training flights.  Today, an essential piece of equipment is the GPS beacon attached to the bird’s leg. This is important, not only because it strengthens the bond between falconer and bird, but also because the birds can be quite valuable, with certain birds worth more than Dhs70,000. The sport of falconry is celebrated across the UAE, with falconry demonstrations playing a major role in UAE National Day celebrations and other holidays and heritage events. Falconry also is reflected in literature and music, with the sport and the bird celebrated in poetry, song and stories.