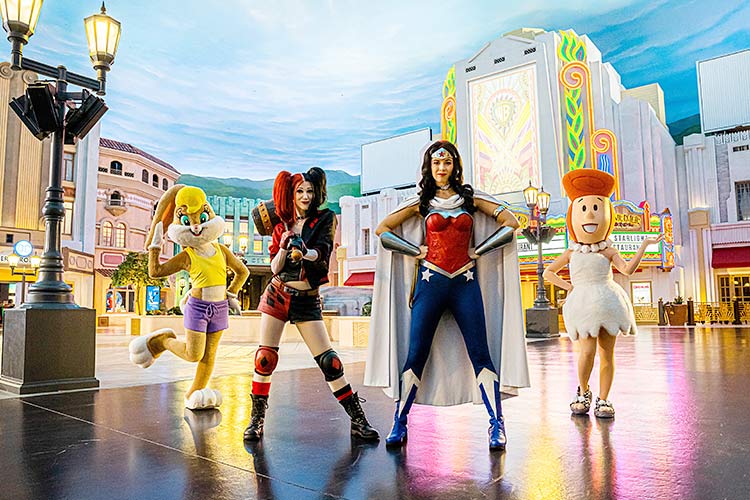 Women of Warner strike a pose.

Marking the 80th anniversary of Wonder Woman and International Women’s Day, Warner Bros. World Abu Dhabi is set to host Women of Warner, its first ever ladies only event. Taking place March 8, ladies can celebrate the day with the theme park’s favourite female Warner Bros. characters, including Wonder Woman, Harley Quinn, Lola Bunny, Betty Rubble and Wilma Flintstone. They can celebrate the Women of Warner and the women of the world with a female DJ on stage at the Warner Bros. Plaza.

With party lights and a mocktail bar to mark the celebration and much more, guests are in for a fabulous evening. All the way from Hollywood, Warner Bros. World is also set to introduce for the first time ever, the ‘Wonder Woman Exhibit’ in Treasures of Hollywood at the Warner Bros. Plaza (Mar. 8 – May 18).

World Abu Dhabi, in key scenes of an all-new commercial. The commercial, which was released on the star’s social media channels, features the park’s Warner Bros. Plaza and Metropolis lands, alongside other popular landmarks in the UAE. Diab is an Egyptian singer, composer and actor. He has established himself as a renowned recording artist and author, in most Mediterranean countries. His style is termed as “Mediterranean music”, a blend of Western and Egyptian rhythms. 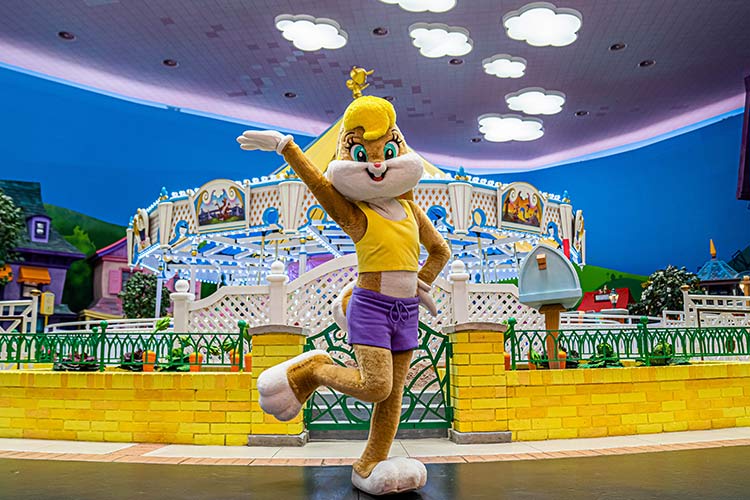 Lola Bunny is all smiles.

By the early 1990s, he became the first Egyptian and Middle Eastern artist to begin making high-tech music videos. He is one of the first singers to popularise music videos in the MENA region. Diab recently unveiled the commercial for his new eau de parfum, 34, where some of the UAE’s landmarks have figured. 1934 is the birth year of both his parents. Among the highlights of the advert are Warner Bros. World Abu Dhabi theme park, Sheikh Zayed Road, Downtown Dubai, Address Sky View hotel, Dubai Marina and Burj Khalifa. Presenter Enjy Kiwan is also seen in the commercial, as Diab meets her in the lobby of the Address Sky View hotel.

Located on Yas Island, Warner Bros. World Abu Dhabi is the world’s largest indoor theme park, at 1.65-million-square-feet. Opened 2018, it is Warner’s fourth branded theme park outside the United States. Guests are transported to six immersive lands, including DC’s Metropolis and Gotham City, Cartoon Junction, Bedrock, Dynamite Gulch and Warner Bros. Plaza. They can also enjoy twenty nine state-of-the-art exhilarating rides, interactive family-friendly attractions and live entertainment. From the action and adrenaline-fuelled adventures of DC Super Heroes to the wacky and wonderful world of Looney Tunes, the captivating and interactive experiences bring together some of the world’s most iconic characters and stories under one roof for the first time in the region, including Batman, Superman and Wonder Woman, as well as Bugs Bunny, Scooby-Doo, Tom and Jerry and The Flintstones, among others.

Gotham and Metropolis are based on the fictional settings of DC Comics super heroes Batman and Superman, respectively. Warner Bros.’s Looney Tunes and Hanna-Barbera cartoon libraries are represented in Dynamite Gulch and Cartoon Junction, along with Bedrock, which is themed around The Flintstones. Warner Bros. Plaza is meant to mimic the Hollywood of the past. In 2020, Warner Bros. World Abu Dhabi received the Trip Advisor Traveler’s Choice certificate and was awarded Middle East’s Leading Tourist Attraction by the World Travel Awards for the second consecutive year. The park also won three accolades by MENALAC (Middle East & North Africa Leisure and Attraction Council), Best Day Out, Best Theme Park and Best New Leisure/Entertainment Concept, for its Teen Titans Training Academy, in addition to being named Best Attraction by the Global Brand Awards. Warner Bros. World was named Theme Park Insider’s Best Theme Park in 2019 and has succeeded in claiming two Guinness World Records titles, namely, ‘Largest Indoor Theme Park’ and ‘The Largest Gathering of People Wearing Capes’.