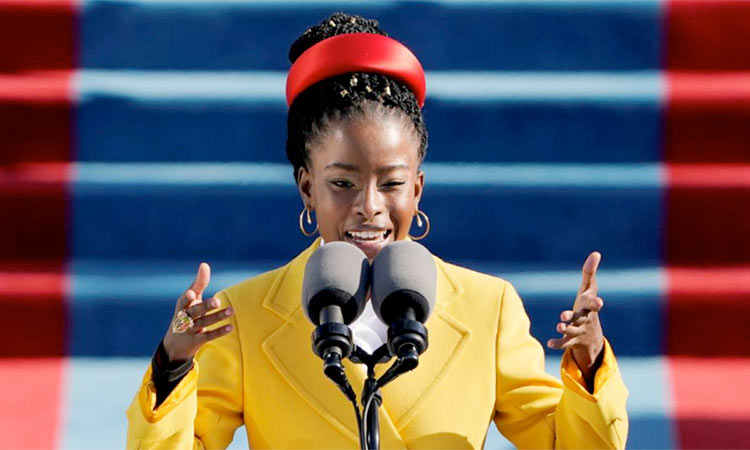 The charismatic 22-year-old is the first-ever poet to perform at the National Football League championship, America's most-watched broadcast of the year, according to AFP.

In a pre-taped performance Gorman delivered her poem "Chorus of the Captains," paying homage to three people declared honorary captains in the night's coin toss: an educator, an intensive care nurse and a US Marine Corps veteran.

"They've taken the lead / Exceeding all expectations and limitations / Uplifting their communities and neighbors / As leaders, healers and educators," she said.

Gorman became an international sensation after reciting her original work "The Hill We Climb" at the inaugural, a poem inspired by the attack on the US Capitol that declared democracy "can never be permanently defeated."

The performance saw her work soar to the top of bestseller lists even before their publication, and IMG Models signed her for fashion and beauty campaigns.

The Super Bowl is among the world's largest stages, with at least 80 million viewers, meaning Gorman's work will reach an even wider audience than Biden's inauguration that saw some 40 million tune in. 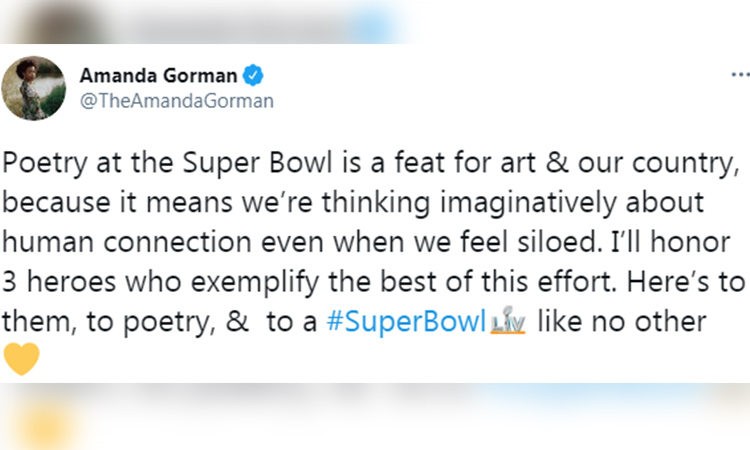 "Poetry at the Super Bowl is a feat for art & our country, because it means we're thinking imaginatively about human connection even when we feel siloed," Gorman tweeted ahead of her performance.

"I also can't reiterate how exciting it is for me that others are excited to see poetry at a football game. What a time to be alive."

The Harvard University graduate was invited to perform in Washington after First Lady Jill Biden saw one of her readings.

Originally from Los Angeles and raised by a single mother, Gorman had a speech impediment as a child -- like the 46th president -- and turned to writing.

In her poem Sunday night Gorman called the work of nurses an example that "even in tragedy, hope is possible."

"For while we honor them today / It is they who every day honor us."

Sunday night's championship game sees the Kansas City Chiefs face off against the Buccaneers of Tampa Bay, where the event of the season is hosted.

Prior to Gorman's performance the enigmatic R&B artist H.E.R. sang an electrified version of "America The Beautiful," and Jazmine Sullivan joined country singer Eric Church for a duet of the US national anthem.

The Weeknd is set to headline the game's halftime show, one of the year's most high-profile performances.