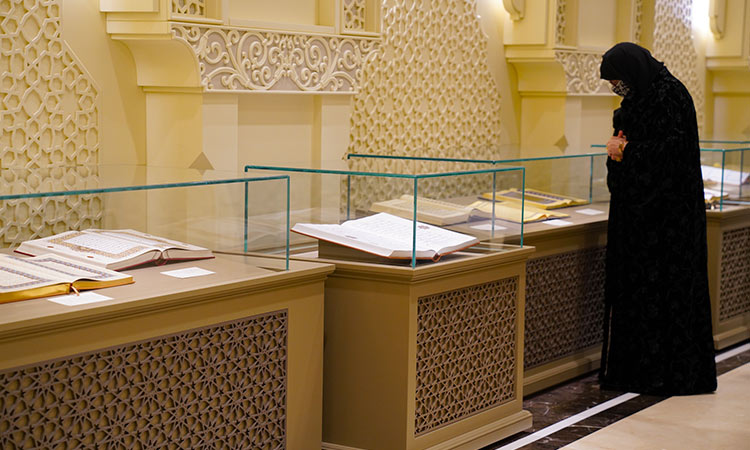 Sheikha Jawaher looks at the books on display at the Holy Quran Academy.

Her Highness Sheikha Jawaher Bint Mohammed Al Qasimi, wife of the Ruler of Sharjah and Chairperson of the Supreme Council for Family Affairs (SCFA), has reiterated the contribution of the Holy Quran to the development of human civilisation for thousands of years, affirming that its teachings have paved the way for key milestones and human achievements in the advancement of science, positively shaping value systems and behaviours, and influencing various schools of thought and philosophy.

These remarks came during a visit to the Holy Quran Academy in Sharjah, which was inaugurated in December by His Highness Dr. Sheikh Sultan Bin Mohammed Al Qasimi, Supreme Council Member and Ruler of Sharjah, when Her Highness encouraged people across the Islamic world to be proud of their tolerant and moderate religion, and centre their journey of life and development around the guidance offered by the Quranic verses and its sciences.

Jawaher beefs up efforts to help families amid virus

The Holy Quran Academy in Sharjah is the biggest complex dedicated to Islam and its teachings in the world. It is home to seven scientific and historical museums which offer detailed insights into the history of writing and the codification of the verses of the Holy Quran, starting in the Prophet’s Era, and a collection of Quranic manuscripts that chronicle Islam’s evolution in various countries across the ages.

Additionally, the Academy offers numerous programmes and activities for researchers and modern learners of the Quran, including a global electronic Maqari’a programme, which allows people to enrol into from anywhere in the world to learn the Holy Quran’s isnads (references). More than 320 students from 101 countries are already enrolled in the programme. 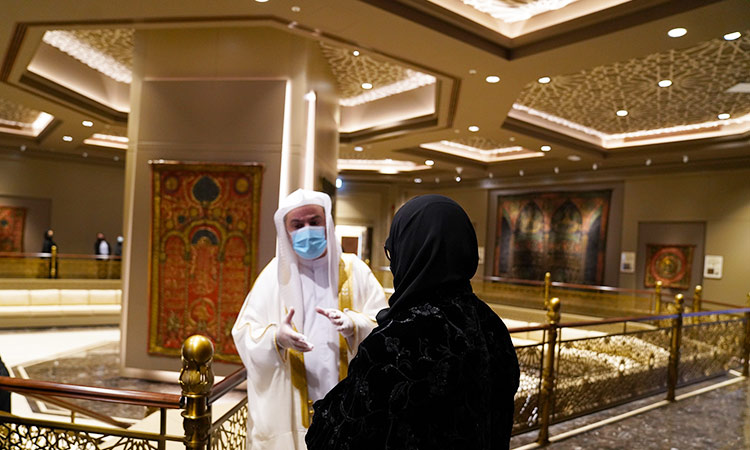 Sheikha Jawaher interacts with an official at the academy.

Her Highness said, “The Holy Quran Academy in Sharjah is a beacon shining light on the beauty and broadmindedness of Islam.” Sheikha Jawaher observed that the academy embodies the Sharjah Ruler’s keenness to embed a love of Arab and Islamic cultures in the hearts of Muslim people, and enable them access to a reservoir of knowledge where they will familiarise themselves with and develop a caring approach towards the Holy Quran, its sciences, and its teachings committed to ethical and humanitarian practices.

Her Highness opined that no matter how hard nations strive to build their modern identities, these will have to be rooted in a comprehensive understanding of and reference to their culture in order for development to not be directionless or lacking in a collective spirit.

The academy features sections and museums that house a valuable collection of the rarest copies of the Quran and Islamic manuscripts, old treasures and exhibits, including the Kiswa (covering) of the Kaaba and the curtains of Prophet Muhammad’s (PBUH) Chamber, as well as the possessions of His Highness the Ruler of Sharjah and those of the most prominent Imams in the Arab World.

Her Highness said: "This academy is the Sharjah Ruler’s gift to the people of Sharjah, the UAE and to Muslim men and women worldwide. Its inauguration coincides with rapidly changing times characterised unprecedented transformations in global societies marked by an intersection of cultures and concepts. The complex reaffirms the importance of faith in serving as a moral compass for human beings, and ensuring they remain on the path of goodness no matter the number of alternatives or temptations that might arise. This academy will always serve as a comprehensive reference point, guiding Muslims to fulfil their positive role in their communities through faith, cooperation, understanding and love.” 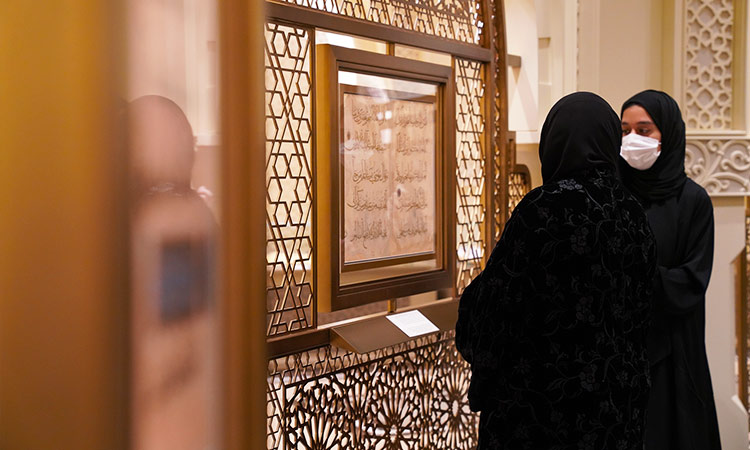 The academy embodies the Sharjah Ruler’s keenness to embed a love of Arab and Islamic cultures in the hearts of Muslims.

Her Highness visited the Museum of the History of Writing the Noble Quran. The museum displays manuscripts distributed over 15 domes, each of which chronicles a Hijri century of events, the history of writing and its features at that time, and the story of the beginning of the revelation of the Holy Quran and its preservation and editing methods and the tools used in each period.

Sheikha Jawaher also toured the Museum of Rare Qurans. This section comprises rare copies of the Quran and archaeological manuscripts, including the possessions of His Highness the Ruler of Sharjah, including 47 Qurans, in addition to 143 manuscripts of the Holy Quran by various African and East Asian nations, and other countries. The museum houses 39 modern copies of the Quran of different designs and Islamic scripts, which have come in from 13 Islamic countries.

Her Highness also stopped at the Seven Readings Museum, which displays tools and exhibits distributed over 10 sections. The museum explains the Seven Quranic readings and their origins, as well as their prominent figures.

HH continued the tour into the Museum of the Recitation Mentors which features prominent Quranic figures throughout history, their scientific achievements and invaluable publications. Sheikha Jawaher stopped at the Museum of the Scientific Miracles in the Holy Quran. The museum is equipped with the latest technologies to familiarise visitors with the scientific miracles and facts in the Quran, highlighting the harmony and inclusiveness of its verses. Each one of the 10 sections of the museum covers one of the main sciences including astronomy, geology, biology, and human science.

At the Museum of the Kaaba clothing (Kiswa), Her Highness inspected the Prophet Chamber’s curtains. The museum houses 18 kiswas, the oldest of which dates back to 970H. In the middle of the museum, there is a model of the door of the Kaaba with an original piece of Kiswa. The museum offers presentations on how the covering of the Holy Kaaba has been made since pre-Islamic times.

Her Highness Sheikha Jawaher was received by Sherzad Abdurrahman Taher, Secretary-General of Holy Quran Academy in Sharjah, and several other academy officials. 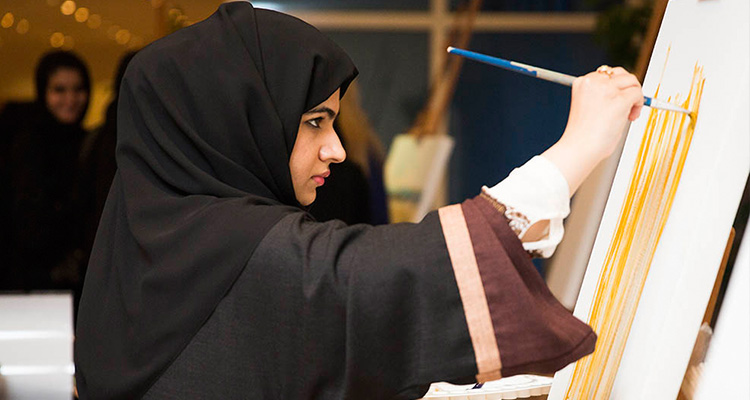 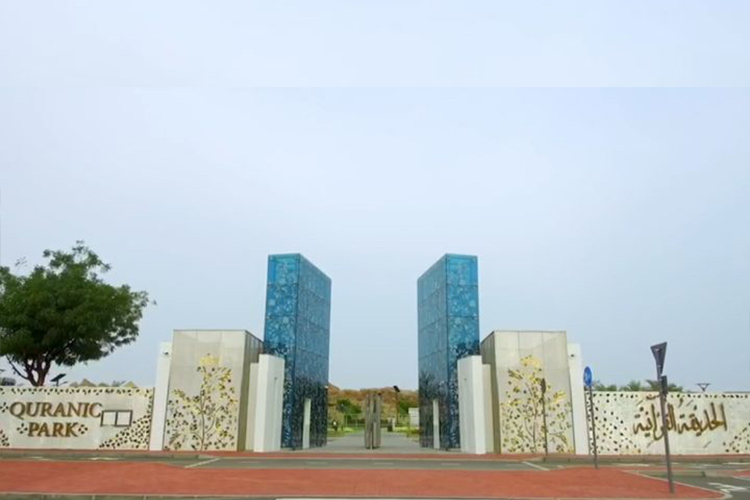