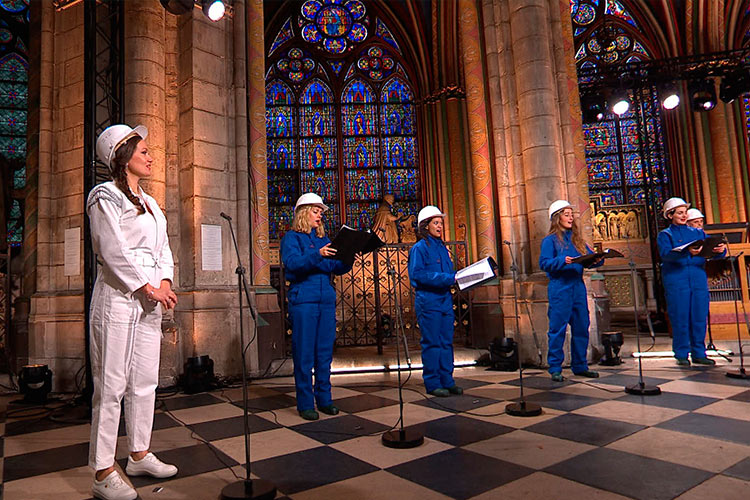 Singer Julie Fuchs and the Notre Dame choir record a Christmas concert inside the Cathedral in Paris. AP

The coronavirus has brought in things in its wake which have become the new normal. Virtual meetings, fist bumps, lockdowns, among other things.

Terms like social distancing have become the order of the day. This particularly applies to places of worship, where restrictions for reasons of health safety have been imposed.

Christmas, the season of joy and cheer, has also been hit, specially where regulations concerning church services are concerned.

For the first time since a fire that nearly destroyed it, the Notre-Dame cathedral in Paris played host to a Christmas Eve choral concert, an annual tradition in France.

Accompanied by an acclaimed cellist and a rented organ, the singers performed beneath the cathedral's stained-glass windows amid the darkened church, which is transitioning from being a precarious hazardous clean-up operation to becoming a massive reconstruction site. The choir initially planned to bring in 20 singers but for safety reasons they were limited to eight.

The choir members stood socially distanced to be able to take off their masks — which are required indoors in France to stem the spread of the virus — and sang.

The public was not allowed and isn't expected to see the inside of Notre Dame until at least 2024.

Acknowledging the fact that the Gothic cathedral is still being rebuilt, members of the choir wore hard hats, worn by construction workers, and boiler suits.

The concert was recorded at the cathedral earlier this month, and was broadcast on French television just before midnight on Thursday.

The choristers performed classical pieces by composers Mozart and Schubert, but also a more light-hearted repertoire, including “Jingle Bells.”

“It was very moving,” said cellist Gautier Capucon, describing the experience of recording the concert. Along with an organist, he provided the musical accompaniment for the choir.

“It was the first time we had all been back at Notre-Dame cathedral since the fire, so it was a moment full of emotion,” he said in an interview with television station franceinfo.

The cathedral, a landmark of Gothic architecture dating to the 13th century and a major tourist attraction, caught fire on April 15, 2019. The blaze destroyed the spire and roof.

The incident stunned France and the world, though firefighters saved the main bell towers and outer walls from collapse before bringing the blaze under control.

But to date, most work on the site has focused on making the building safe, including clearing up toxic lead from the roof and spire that melted in the fire.

In the meantime, masses are cancelled.

In April this year, seven people were allowed to attend a religious ceremony in the cathedral to mark Good Friday, when Christians commemorate the death of Jesus Christ.