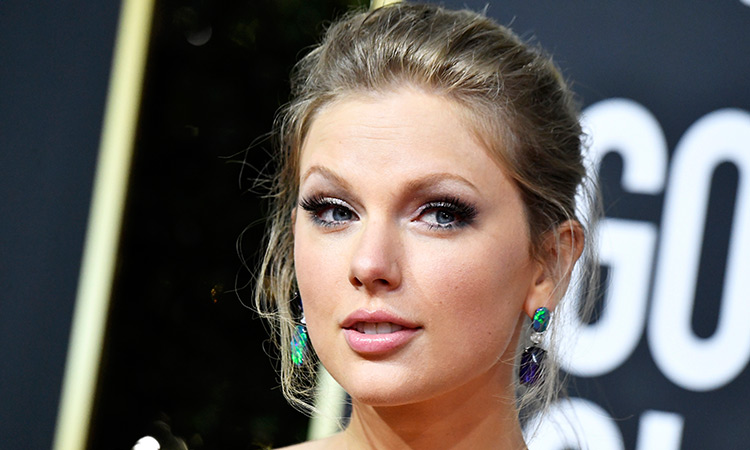 Taylor Swift won her third consecutive artist of the year prize at the American Music Awards, but she missed the show for a good reason: She said she's busy re-recording her songs' masters after her catalog was sold.

In a video that aired during Sunday's awards show, the pop star said "the reason I’m not there tonight is I’m actually re-recording all of my old music in the studio where we originally recorded it. So it’s been amazing. And I can’t wait for you to hear it."

Last year music manager Scooter Braun - who manages Justin Bieber and Ariana Grande - announced that his Ithaca Holdings company had acquired Big Machine Label Group, the home to Swift’s first six albums. This month Braun said he has sold the master rights to Swift’s first six albums to an investment company; Swift acknowledged the sale on social media and said she would not work with the new buyers because Braun was still involved.

Instead, she began re-recording her albums. 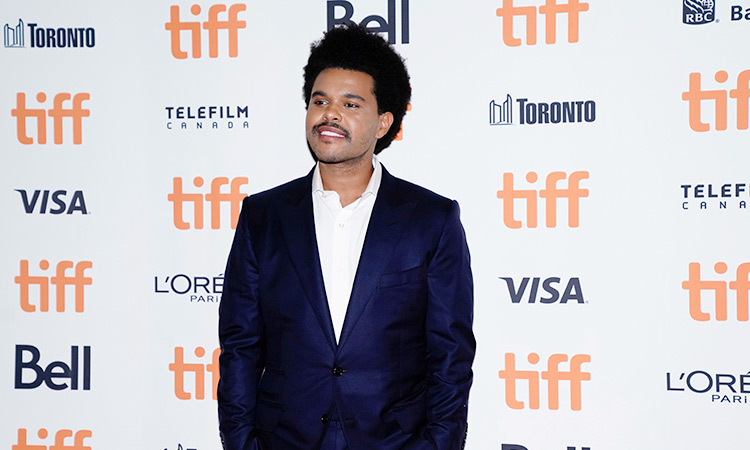 The Weeknd lost artist of the year, but he still kicked off his all-star week as a big winner: Days before he’s expected to land multiple Grammy nominations, the pop star dominated the 2020 American Music Awards with multiple wins. 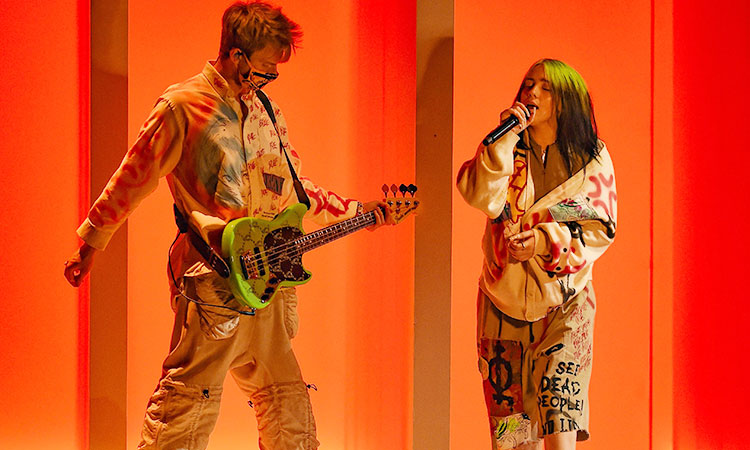 The Weeknd didn’t break character throughout the three-hour show with his gauze-wrapped face, which matched the vibe of his recent album and music videos where he appears blooded and bruised. He accepted his awards and performed with his face wrapped in gauze.

Host Taraji P. Henson joked that A-list celebrities were in the audience, including Beyoncé, though cardboard cut-out of the singer, Jay-Z and other stars appeared in seats.

But a good number of chart-toppers were in the building. Breakthrough singer-rapper Doja Cat performed and won multiple honors, including new artist of the year and favorite soul/R&B female artist. Grammy-winning country duo Dan + Shay beautifully performed "I Should Probably Go to Bed” and won collaboration of the year and best country song for "10,000 Hours," both shared with Bieber. And Megan Thee Stallion - won favorite rap/hip-hop songs for "WAP" with Cardi B - performed "Body" from her recently released debut album "Good News." 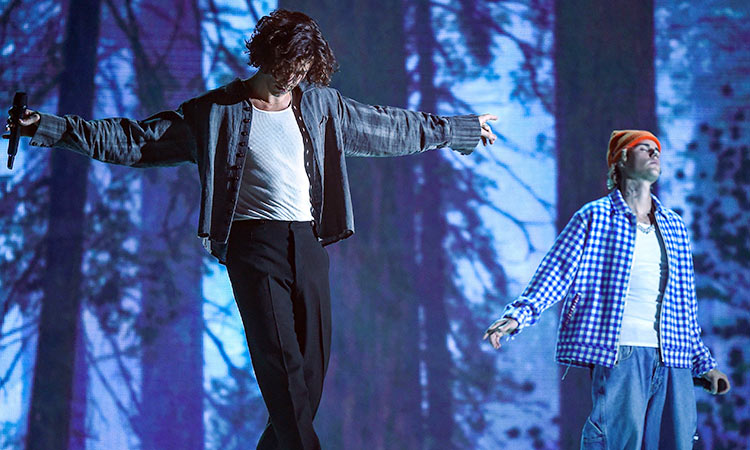 Bieber and Shawn Mendes kicked off the AMAs with a pre-taped performance of their new duet "Monster," marking the first time they performed the song together. It began with a stripped-down Bieber singing his recent hit "Lonely," with songwriter-producer Benny Blanco on piano, and "Holy," where background dancers wearing masks joined him.

Mendes, strumming his guitar, then appeared for "Monster," which featured the twentysomethings singing lyrics about about fame and growing up as celebrities who attracted massive public attention. Mendes later sang his song "Wonder" during the show, which aired on ABC. 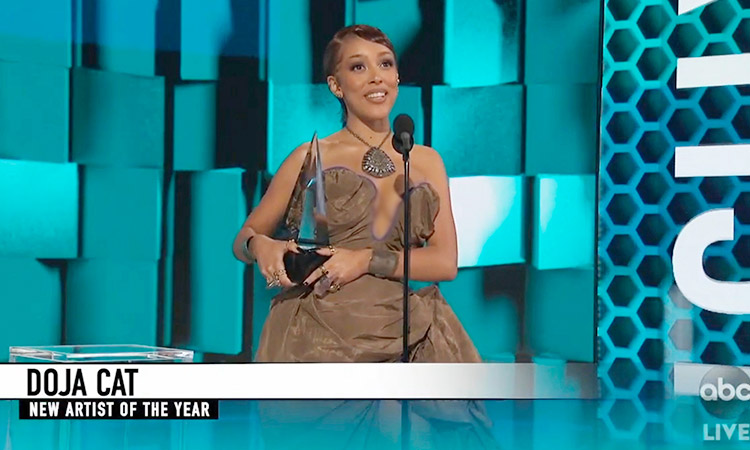 Doja Cat accepts the award for new artist of the year at the American Music Awards. AP

Katy Perry, in her first performance since giving birth to her first child, gave a strong performance of the emotional and hopeful song "Only Love,” which featured a surprise guest appearance from Darius Rucker, who sang and played guitar. With flaming red lights glaring behind her, Billie Eilish sang her new song "Therefore I Am,” as her brother-songwriter-producer Finneas backed her on guitar. Jennifer Lopez and Maluma teamed up to perform their new songs "Pa’ Ti” and "Lonely” from the film "Marry Me,” which both of them star in, while Dua Lipa - who won favorite pop/rock song - levitated in the air during her performance of "Levitating.” 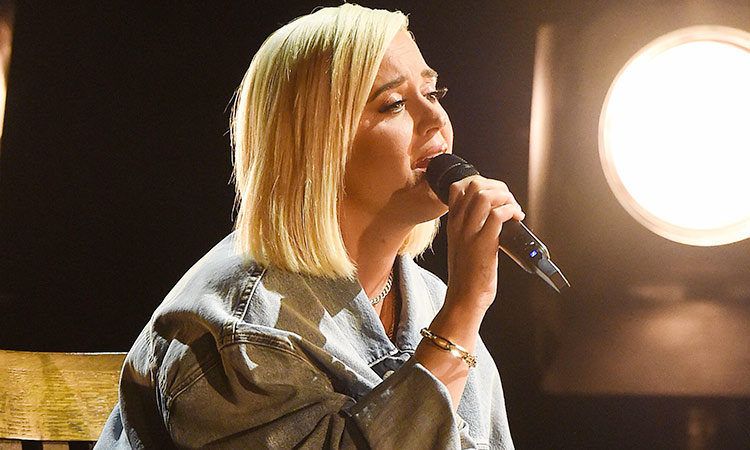 Katy Perry performs during the 2020 American Music Awards at the Microsoft theatre. AFP

24kGoldn and Iann Dior - who currently have the country's No. 1 song with the smash hit "Mood," also performed. The multi-genre track is the rare song that has reached No. 1 on both the rap and rock charts. 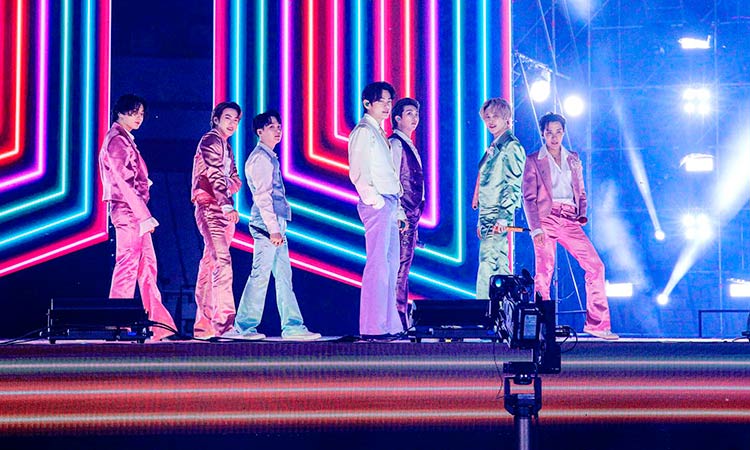 This year the AMAs, which typically awards one Latin honor, launched more categories in the genre. Becky G - who burst on the music scene in 2014 with the pop hit "Shower" but has recently had success singing in Spanish and launching hits on the Latin charts - won favorite Latin female artist.

She used her speech to honor immigrant families.

"I proudly wave both flags, Mexican and American. And like many, many children and grandchildren of immigrants, no matter where they’re from, we have learned from the ones before us what sacrifice and hard work looks like," she said. "And I dedicate this award to all of our immigrant workers in this pandemic; the students and immigrant families. It’s because of my family, my abuelitos, that I stand here today."

Nominees for the AMAs were based on streaming, album and digital sales, radio airplay and social activity, and reflect the time period of Sept. 27, 2019, through Sept. 24, 2020. 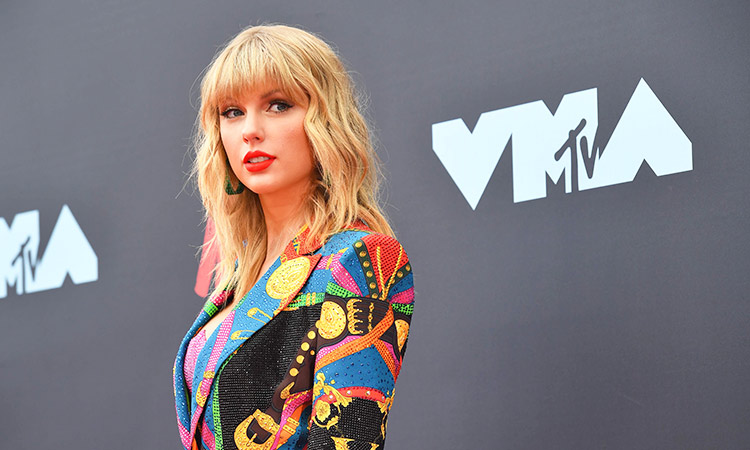 Swift signed with Big Machine at age 15 and left last November for Universal Music Group, a unit of French conglomerate Vivendi. She released her first album with UMG in August. 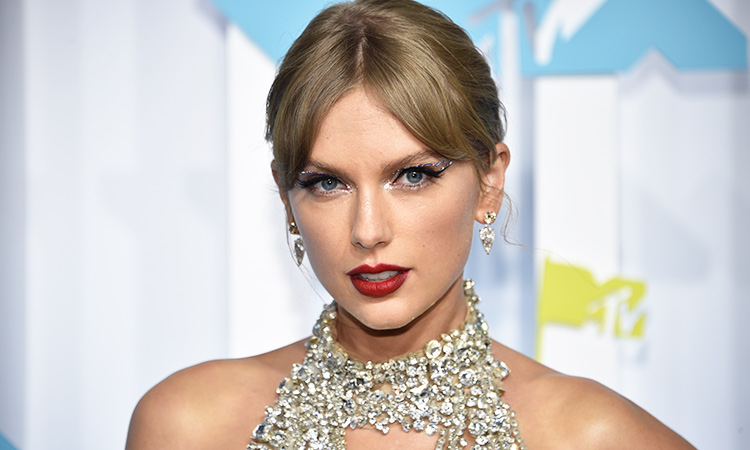 The singer thanked fans from the stage at the Prudential Center in New Jersey as she accepted the honor, the 14th VMA of her career.