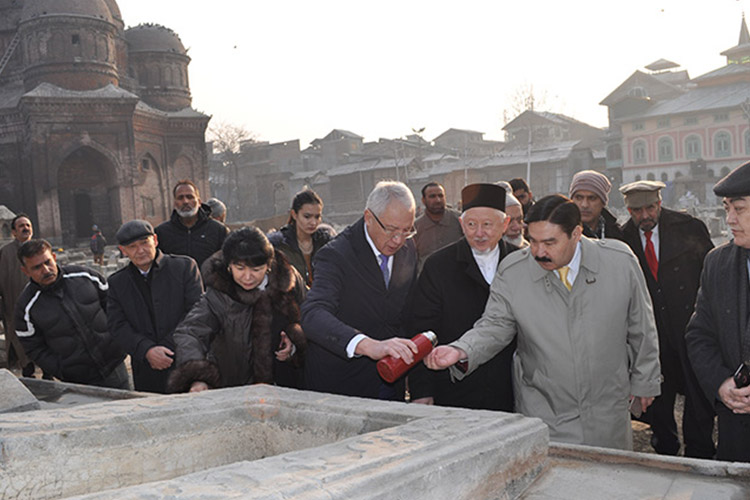 Dignitaries and officials at a cultural site.

India is rediscovering its ties with Kazakhstan, courtesy the military campaigns of a Kazakh prince who was the governor and the de facto ruler of Kashmir in the 16th century.

The restoration of the grave of Mirza Muhammad Haidar Dughlat Beg in Srinagar has been a labour of love for the Kazakh embassy in India and the Archaeological Survey of India (ASI).

Prince Haidar was a first cousin of Prince Zahir of the Shahmiri dynasty. Prince Zahir later became known as Emperor Babur, the first of the Mogul dynasty in India. Their mothers were sisters.

The grave is part of the “Mazar-i-Salatin” (Cemetery of the Kashmir Sultans of the Empire of the Great Mughals). This cemetery also includes the tomb of the mother of the longest-serving Shahmiri King, Sultan Zainulabideen.

Mirza Muhammad Haidar Dughlat Beg, born in 1500, was a Chagatai Turco-Mongol military general, the ruler of Kashmir, and a historical writer. He was a Turkic speaking Dughlat prince who wrote in the Persian and Chagatai languages.

His 10-year reign in Kashmir ended in 1551, when he was killed while fighting against a revolt. His grave is in one section of the massive royal graveyard at Zaina Kadal, along with seven other graves that are being restored by the ASI.  The royal grave was washed away during the devastating flood in Kashmir in 2014.

In January 2018, the Kazakhstan Embassy in India held the solemn opening of the restored grave of Mirza Dughlat Beg, with the support and participation of the Archaeological Survey of India.

The restoration of the grave as well as the preparation and installation of the informational desk were the result of more than two years of work.

For the Republic of Kazakhstan, the restoration of the grave is part of their state’s efforts to preserve the history of the Kazakh people. The Kazakh regard Mirza Dughlat Beg as an outstanding son of the Kazakh steppes, representative of the ancient Kazakh tribe Duglat.

Mirza Dughlat Beg was not only a military general, but also a prominent politician and historian of his times. His historical work Tarikh-i-Rashidi (History of Rashid), written in Persian, is a personal memoir combined with Central Asian history. The book contains priceless information about the formation of the Kazakh Khanate (the Kazakh state), as well as the events of that time took place on Kazakhstan territory and also in Kashmir.

Mirza Muhammad Haidar devoted this extensive work, written in Kashmir from two volumes, to contemporary ruler of Kashgaria Abdurashid Khan, son of Sultan Said Khan, descendant of first Moghul Khan Tughluk Timur Khan and founder of Saidiya state or Yarkent Khanate in Kashgaria in 1514. It was translated into English in 1895 by Ney Elias and Edward Denison Ross. Among other events, the Tarikh-i-Rashidi describes the founding of the Kazakh Khanate in 1465 and Muhammad Haidar Dughlat's personal encounter with one of the early Kazakh rulers, namely Kasym Khan. 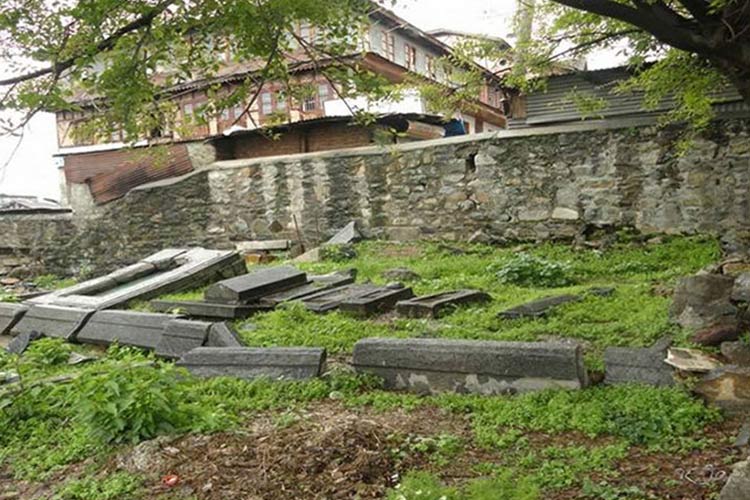 A closer look of the graveyard.

The Kazakh people have so much pride in Mirza Dughlat Beg that they have built a huge monument in his honour in their country. The Taraz State University in Kazakhstan has been named after Mirza Dughlat Beg.

The newly opened information desk at Mirza Dughlat Beg's grave at Zaina Kadal in Srinagar informs the visitors and tourists about this outstanding Kazakh politician, historian, his life and background.

The clearing of the site of Mirza Dughlat Beg has unearthed two inscriptions. One is set in a small, but exceedingly worn white marble stone that has disintegrated in two parts. This inscription has the Kalma Sha’da written in Persian nastaliq, followed by a Persian chronogram which gives the year of the death of Haidar.

This half portion of the marble stone has been retrieved during the excavation. The rest of it has also been found, and will be restored soon. The second and more extensive inscription, also in Persian, is inscribed on a piece of grey limestone.

It was put beside the grave on Feb.23, 1823, by Mir Izzat Ulalh Mughal. This extensive inscription was placed on the grave on the orders of the famous British veterinarian and traveller Willam Moorcraft, two years prior to his death in Bokhara. The inscription gives a brief account of the life of Mirza Dughlat Beg.

Mirza Dughlat Beg significantly enriched Kashmir culture with his strong personal interest in the arts and crafts. He was instrumental in introducing Tapdan Turashi, a craft of stone pinjakari, and several other Turkish crafts in Kashmir, and also felicitated the import of Pashmina from Central Asia to Kashmir.

Mirza Dughlat Beg first launched a military campaign in Kashmir in 1533, on behalf of Sultan Said Khan of Kashgar. He drove out Kamran, the second son of Babur, from Kashmir.

He did not stay long in Kashmir thereafter. He left after entering into a treaty with the local sultan, and striking coins in the name of Sultan Said Khan of Kashgar. Mirza Dughlat Beg returned to Kashmir in 1540. This time, he came as the general of the army of Mughal emperor Humayun, the first son of Babur. Mirza Duglati had come to Kashmir with his army for a military takeover. The Mughal general was invited by one of the two rival factions that continually vied for power in Kashmir.

Mirza Dughlat Beg also attacked Tibet through Ladakh, but failed in his objective.

Arriving in Kashmir, Mirza Dughlat Beg was installed as the Sultan the head of the Sayyid faction, Nazuk.

In 1546, after Humayun recovered Kabul, Mirza Duglati removed Nazuk Shah and struck coins in the name of the Mughal emperor. He died in 1551 after being killed in battle with the Kashmiris.