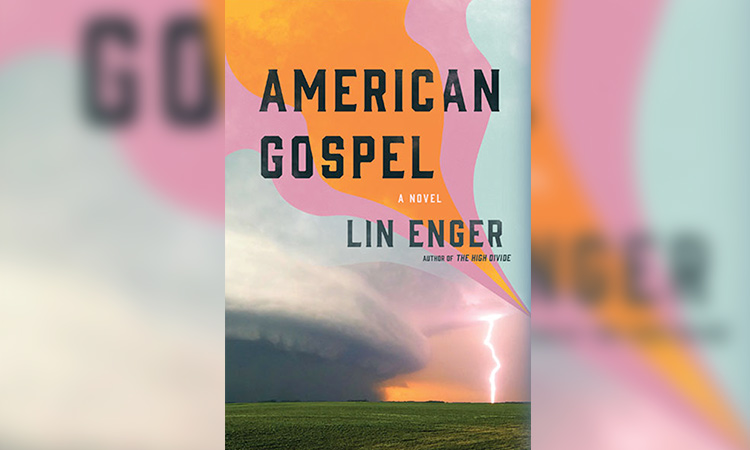 It's August 1974 in a fractious America. Watergate has forced Nixon's exit, to the relief of most and the dismay of some. Among the latter is Enoch Bywater, a lanky farmer in his 70s who lives in a "lavender blue" lake-mirrored stretch of the North Woods near the (fictional) town of Battlepoint, "north of Bemidji."

On Aug. 6, Enoch is felled by a heart attack, then stolen from death by the vigorous CPR of a stranger who disappears (an angel?). During Enoch's time in the shining portal between worlds, he has a vision of the Rapture, in which the faithful (as defined by some evangelical Christians, including our Enoch) are lofted into heaven. The Rapture, Enoch declares, will occur on Aug. 19.

Nick Hornbys latest romance novel is about loving against all odds

Enoch is one of three main characters in "American Gospel," the third novel by Minnesotan Lin Enger, who teaches English at Minnesota State University Moorhead. The second is Peter, Enoch's chain-smoking, self-involved 32-year-old son, a Manhattanite who dreams of making it big in the whirlpool of 1970s journalism without having paid any dues. (Good luck there, buddy.) "He knows only what he knows, which is far less than he imagines," we are told of Peter.

The third is Melanie Magnus, a 30-year-old Percocet-popping Hollywood star who 15 years ago was shy Annie Magnusson, a neighbour of the Bywaters who fled to California after becoming pregnant by 17-year-old Peter and giving their son up for adoption.

These three, along with a cast of colourful minor characters (including Enoch's Unitarian mistress, Melanie's boorish pig-farmer/sheriff's deputy brother, and Melanie and Peter's teenage son), converge on Enoch's farm to await the Rapture, all with their own motives. Enoch hopes that his burning faith and role as a prophet will be justified. Melanie hopes for an end to the pain, "the kind that calls for routine numbing," that afflicts her mind and body. Peter hopes for Melanie's love and for a journalistic scoop. Once his hastily written story about Enoch and the Rapture vigil hits big publications and snakes onto the Associated Press wire, people start to flock to Enoch's farm.

Everything about this highly entertaining story is implausible, until you remember that not only does fiction have the absolute right to be implausible, but that pretty much everything happening these days in America is over the top. In the discord and dark comedy of Enger's novel lurk echoes of our own times _ minus, of course, Twitter.

As in Revelation, spooky beasts prowl _ a cougar, a bull and a boar, all of whom stand for death that's been largely cheated.

Does that Aug. 19 Rapture come? Yes and no, and that's all we'll say about that to maintain the book's appealing suspense. In the days between Enoch's hallucination and the book's dramatic climax, Enoch, Peter and Melanie all are changed, becoming more loving and nuanced than when we first encountered them a mere few days, and pages, earlier.

Redemption comes in many guises, and that is what this clever, hyperactive story is all about. That it's set in Minnesota makes it doubly endearing.