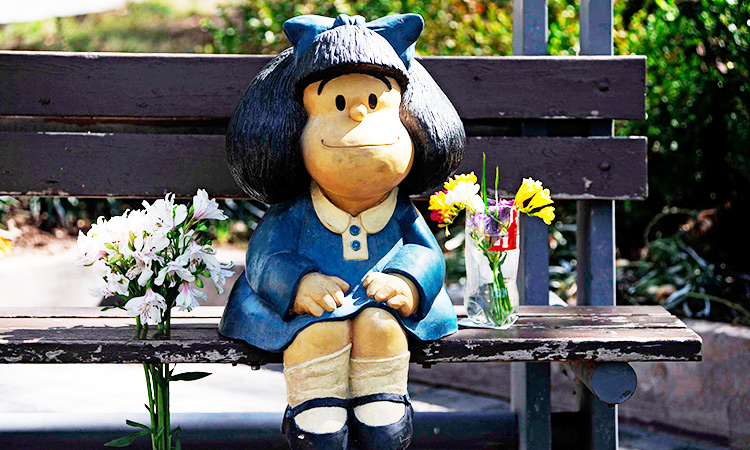 Flowers are seen by a statue depicting Mafalda.

Under the pen name "Quino" he created Mafalda in 1964, and the strip became popular in newspapers across Latin America, Europe and much of Asia before being turned into books.

"Quino has died. All good people in the country and in the world will mourn him," Daniel Divinsky, head of Buenos Aires publisher Ediciones de la Flor, wrote on Twitter.

His death was mourned in an avalanche of farewell messages and tweets that quickly began trending under #Quino in Argentina.

Calling the cartoonist one of the country's greatest artists, President Alberto Fernandez said Quino had "made us laugh, he made us think and he always called on us to reflect on Argentina, to which he was committed like few others." 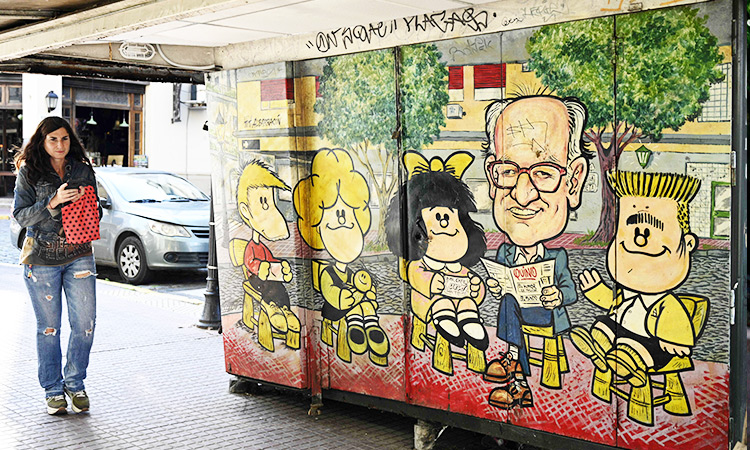 A woman pass by a newspaper and magazine kiosk decorated with the image of Joaquin Salvador Lavado.

People left flowers in tribute to the cartoonist at a sculpture of Mafalda and her cartoon companions on a bench in the Buenos Aires neighborhood of San Telmo.

"I had to go out to do some paperwork and I thought of coming to greet Mafalda, Susanita and Manolito, because there are several generations of us feeling a little orphaned today, I think. And they even more so," San Telmo resident Damian Lozada told AFP.

Quino died in the central city of Mendoza, where he was born to Spanish immigrant parents in 1932 and studied at the city's college of fine arts before having his first cartoon published at the age of 18.

"I draw because I speak badly," he once said.

His complex over verbal communication pushed him to create Mafalda -- an irreverent 6-year-old who hates communism and soup and loves The Beatles -- for an advertising campaign for electrical appliances. 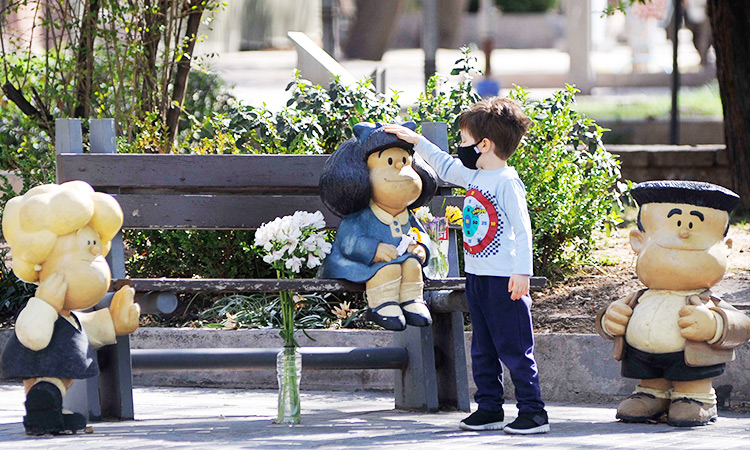 In the series, Quino reflects the world of adults as seen through the eyes of a group of children, with the ironic, non-conformist Mafalda as the central character.

"She is a girl who tries to solve the dilemma of who are the good guys and who are the bad guys in this world," he once told journalists.

Power of the Pencil

"At the age of three I drew my uncle. I discovered that people, horses, trains, mountains could come from something as simple as a pencil... a pencil is something wonderful," Quino told foreign correspondents in Mendoza in 2014.

Following the military coup in Argentina in 1976, the young cartoonist fled to Milan, before becoming a Spanish citizen in 1990. He has lived alternately in Madrid, Paris, Milan and Argentina.

Like Mafalda, Quino was a declared lover of freedom, although he suffered censorship from the very beginning. 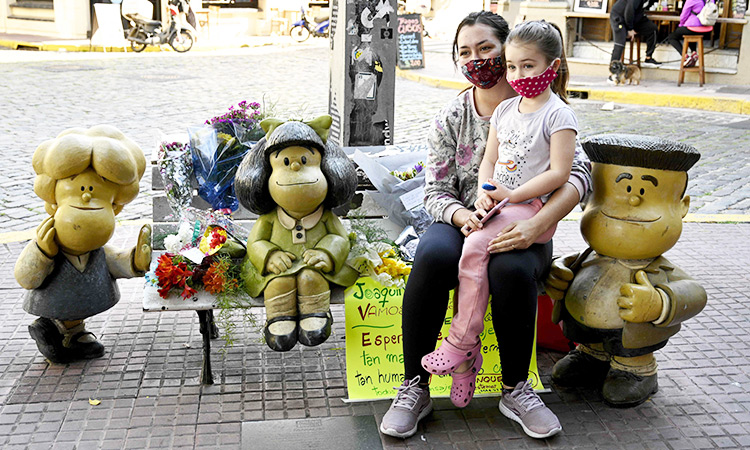 A woman and her daughter poses next to statues depicting Mafalda.

When Mafalda arrived in Spain, during the Franco dictatorship, "it went out with a band that said 'for adults only' and it was also censored in Bolivia, Chile and Brazil," when those countries were also under military dictatorships.

Apart from numerous international prizes for humour, Quino was awarded Spain's prestigious Prince of Asturias award for Communication and Humanities in 2014.