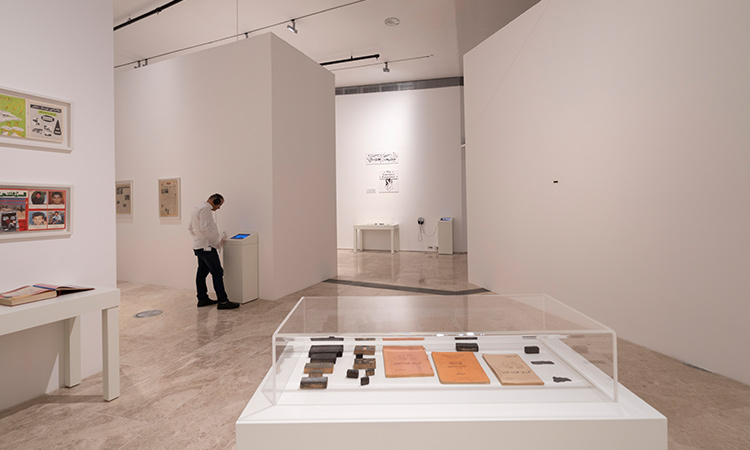 The Palestinian Museum has launched its latest exhibition, Printed in Jerusalem: Mustamloun, virtually on YouTube and other social media platforms. The launch took place after the installation of the exhibition was completed in the exhibition hall of the museum, despite the pandemic and lockdown.

Printed in Jerusalem is organised in partnership with the Palestinian Heritage Museum (PHM) at Dar Al-Tifel Al-Arabi in Jerusalem and runs until Dec. 2020. Curated by Baha Jubeh and guest curator Abdel-Rahman Shabane, it explores the relation between Jerusalemites and publications printed in their city, be their content political, educational, commercial, cultural or touristic, by probing the profession of the mustamly.

A mustamly (plural: mustamloun) was tasked with dictating manuscripts to copyists and acted as an intermediary between authors and the public. Historically, this transmission of content was associated with censorship as well. The ancient profession disappeared as modernisation took hold.

The exhibition seeks to analyse the emergence and disappearance duality that was inherent to the city’s publications, which were subject to censorship by the occupation. It explores the city’s political, touristic and cultural role and attests to Jerusalem’s leadership in printing, and in the development and publication of educational resources.

The exhibition also sheds light on aspects of Jerusalem’s cultural and social practices and examines its economic and commercial activity. This is the second iteration of Printed in Jerusalem, which first opened at Jerusalem’s PHM at Dar Al-Tifel Al-Arabi in late-2018. It presented a selection from Jerusalem’s Modern Press (Lawrence Press) collection of printing clichés and tools, donated to PHM in 1998. 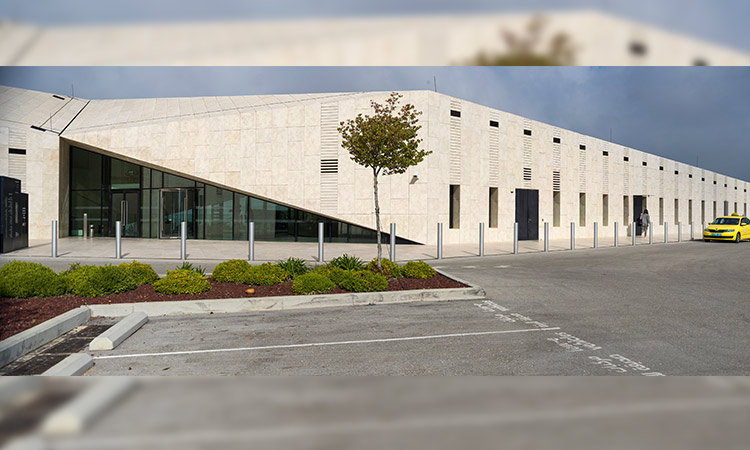 In parallel, the museum’s Glass Gallery complements the exhibition’s themes by hosting stations of interactive educational games and activities for children and families.

Printed in Jerusalem was launched virtually by video, with an introduction by General Director of the museum, Adila Laïdi-Hanieh, PhD, and Director of PHM, Khaled A Khatib. Laïdi-Hanieh emphasised the significance of overcoming the challenges imposed by the pandemic and lockdown to realise the exhibition. She also stressed the importance of this iteration of the exhibition, which expands on the original in several aspects by exploring the history of print journalism in Jerusalem and the city’s social life, and by presenting rare and noteworthy printed materials.

She praised the museum’s first institutional partnership with the PHM and expressed her gratitude to the exhibition’s supporting institutions: The Arab Fund for Economic and Social Development and AM Qattan Foundation through the ‘Visual Arts: A Flourishing Field’ (VAAF) grant, funded by Sweden.

She expressed her hope that the public may soon be able to visit the exhibition in person upon the museum’s reopening. Khatib affirmed the significance of hosting Printed in Jerusalem at the Palestinian Museum, which allows for a wider audience to experience the exhibition.

He stressed the importance of the museum’s expansion on the original concept and of the development of programmes to accompany the exhibition, regarded as one of the most significant and successful exhibitions organised by the PHM in Jerusalem.

He also emphasised the importance of continued partnership with the Palestinian Museum to make the historically significant Dar Al-Tifel collection available to those who are barred from entering Jerusalem.

The Palestinian Museum is organising a series of virtual guided tours of the exhibition to be made available to the public. The tours are led by exhibition curators Baha Jubeh, Abdel-Rahman Shabane, and assistant-curator Sandy Rishmawi.

The museum is also organising a wide-ranging series of online events and activities, which began in mid-July and include lectures, discussions, interactive educational workshops, Object-in-Focus events, performances and more.

Built to celebrate Palestinian heritage and with a stated aim to ‘foster a culture of dialogue and tolerance’, the Palestinian Museum is a flagship project of Palestine’s largest NGO, with support from nearby Birzeit University.

The site is defined by agricultural terraces formed of dry-stone walls (sanasil) erected by local villagers to adapt the terrain for cultivation. Selected through an international competition, the design takes its cues from this setting and is firmly embedded within it.

The zigzagging forms of the museum’s architecture and hillside gardens are inspired by the surrounding agricultural terraces, stressing the link with the land and symbolising resistance to the West Bank’s military occupation.

Palestinian limestone, quarried locally near Bethlehem, is used for both façade cladding and exterior paving, unifying the scheme. The garden is themed to range from agricultural crops at the outer confines to more refined plantings nearer the buildings, and is intended to supply the café with typical Palestinian produce.

Rainwater from the terrace and amphitheatre is harvested for use in the irrigation and flush systems, and wastewater is treated also for use in irrigation.