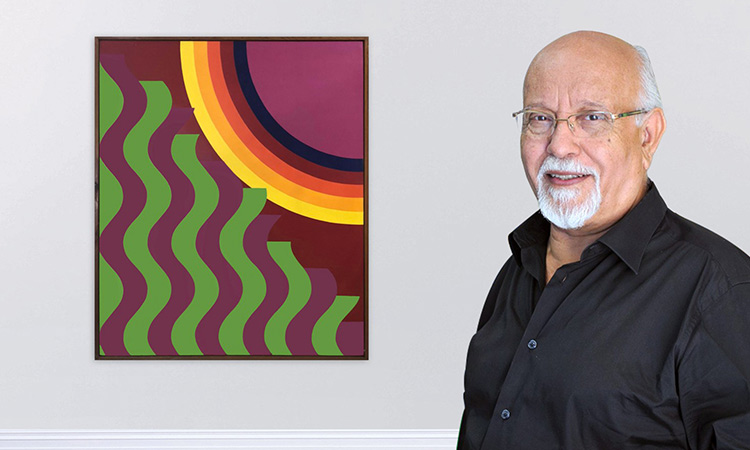 Alserkal Arts Foundation is presenting New Waves: Mohamed Melehi and the Casablanca Art School Archives in Concrete, Alserkal Avenue, Dubai (Sept. 19 – Oct. 10). Curated by Zamân Books & Curating, the exhibition tells the story of the radical Casablanca Art School, retracing iconic Moroccan artist Melehi’s career chronologically, from the 1950s to the 1980s. The exhibition will showcase never before seen artworks and archive material, documenting an influential moment in the MEASA region’s art history. Melehi is widely regarded as a major figure of postcolonial Moroccan art and of transnational modernism. Since the 1960s, he has been elaborating a body of work based around the recurrent motif of waves. The canvases are consistently hard-edged and optic abstractions — the lines are clean, the colours are clearly delineated, and the brushstrokes and movements of the paintbrush are not visible.

The waves themselves are often reconfigured, turned vertically to become flames, or cutting across the canvas on an angle.They have been linked to the waves on the beaches of Asilah, Melehi’s hometown, the gesture of writing Arabic calligraphy, and, in their meditative consistency, to transcendence and prayer. The retrospective brings the pioneering artist’s multi-faceted career to life, giving UAE audiences a unique insight into a practice that are critical and relevant for contemporary concerns in the region. Previously unseen works and archives present him as a painter, photographer, muralist, graphic and urban designer, art teacher, and cultural activist. New Waves exhibits Melehi’s documentary photography — through his travels, and activism — as well as highlights from his graphic design studio SHOOF, and the remarkable murals of the Asilah festival.

Expanded research has allowed fresh insight into the experimental spirit of the Casablanca Art School, as they challenged convention and collaborated to produce radical forms of pedagogy and exhibition making, bringing the artist from the studio onto the streets and public squares of Morocco. The show explores Melehi’s in-depth engagement with Afro-Berber art and craft through the collection of Bert Flint, from which he drew artistic inspiration. Originally produced by The Mosaic Rooms, A M Qattan Foundation, in London, where it was shown from Apr. 12 – June 22, 2019, and then at Museum of Contemporary African Art Al Maaden (MACAAL) in Marrakech from Sept. 21, 2019 – Jan.5, 2020, the upcoming presentation is a more expanded version.

It includes a recently archived collection of Melehi’s documentary photography — over 30 years of artistic travel and visual activism journeys — as well as highlights from the golden age of the Asilah festival. The festival, co-founded by Melehi in 1978, gathered avant-garde artists from Africa, Asia, and Arab countries. The exhibition will reveal Melehi’s key role in the development of art pedagogy and experimental practices in Morocco, as well as his significant work in graphic design and mural painting, which has contributed heavily in shaping the aesthetics of artistic networks and political causes throughout the Maghreb and Pan-Arab region. 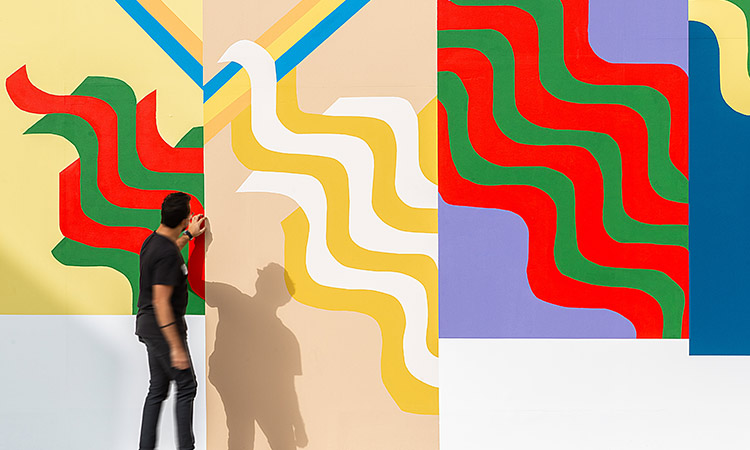 The Dubai edition marks the first time the full period of Melehi’s works has been shown on a global stage, with a researched display. In the spirit of Melehi’s impulse to free visual art from the gallery and bring painting into the public realm, the exhibition extends into The Yard in Alserkal Avenue. An adapted recreation of a mural from the first Asilah Moussem Festival of the Arts in 1978 has also been painted by students from Zayed University, in collaboration with Jotun paints. Melehi’s work has featured in numerous solo exhibitions, including a retrospective at the Institut du Monde Arabe, Paris, 1995, and the Bronx Museum of the Arts, New York, 1984.

Morad Montazami is the Director of Zamân Books & Curating. He is an art historian and curator. His research interests are cosmopolitan modernisms and histories of the avant-garde throughout West Asia, North Africa, and the Mediterranean. He was previously Adjunct Research Curator at the Tate Modern and has published essays on artists Farid Belkahia, Bahman Mohassess, Behjat Sadr, Hamed Abdalla and Latif Al Ani, among others. Zamân Books & Curating Artistic and cultural project manager Madeleine de Colnet has been instrumental in the creation of various cultural institutions in Morocco and France. From 2007 to 2012, she developed and brought to life La Fabrique du Regard, the pedagogical platform of the Paris-based LE BAL, a not-for-profit independent platform for exhibitions, publications, ideas and education.

During 2013 - 2016, she was a project manager for the launch of the art space Kulte Gallery & Edition, in Rabat. Since 2017, she has been involved in the development of the platform Zamân Books & Curating. The Mosaic Rooms are a non-profit art gallery dedicated to supporting and promoting contemporary culture from the Arab world and beyond, based in London. They do this through free contemporary art exhibitions, multidisciplinary events and a learning programme. A project of the A M Qattan Foundation, the non-profit cultural organisation is dedicated to supporting and promoting contemporary culture from and about the Arab world to create a more informed, engaged and critical understanding of Arab culture and society in the West.