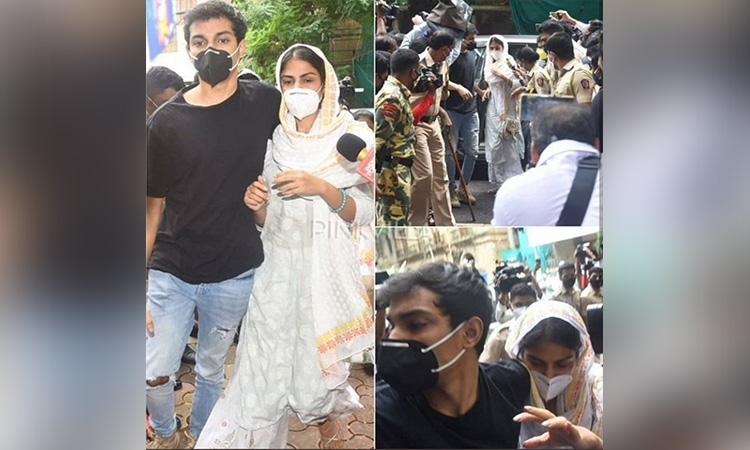 Rhea Chakraborty and her family reaches ED office for questioning.

Actor Rhea Chakraborty, her brother Showik and father Indrajit Chakraborty on Monday deposed before the Enforcement Directorate (ED) for questioning in a money laundering probe connected to the Sushant Singh Rajput death case.

Their questioning began around 12.15 p.m.

The ED on Friday had quizzed Rhea, her ex-manager Shruti Modi, Sushant's house manager Samuel Miranda in connection with the case. The ED had also questioned Showik on Friday for over eight hours and for over 18 hours on Saturday and on the intervening night of Sunday.

This is for the first time that Rhea's father Indrajit was being questioned by the ED in connection with the case.

ED sources said that the agency suspects illegal money transactions and investigators have a clear picture about the whole matter.

On earlier occasions, Rhea has remained evasive during the questioning and claimed to be innocent.

The ED will question the actor and her family members regarding three of Rajput's companies she is partners in. Rhea has told the financial probe agency sleuths that Rs one lakh was the paid-up capital, which was shared by the three of them (Sushant Singh Rajput, Rhea and Showik Chakraborty), and apart from that, she hasn't spent any more on the company.

The ED is also looking into two properties owned by Rhea and her family. Regarding the Khar (East) flat that is in her name, Rhea has told the ED officials that she took a housing loan for Rs 60 lakh and the rest of the amount, around Rs 25 lakh, have been paid through her own income.The agency will also question her father about another property.

The agency has asked for income tax returns of the last five years from the Chakraborty family.

The ED on July 31, registered the case on the basis of a Bihar Police FIR on the complaint of Sushant's father K.K. Singh, who alleged that Rs 15 crore was withdrawn or transferred from his son's Kotak Mahindra Bank account holding Rs 17 crore.

The ED had registered the case under the Prevention of Money Laundering Act against Rhea and her family members on the basis of Singh's complaint submitted at the Rajiv Nagar police station in Patna.

Sushant and Rhea were said to be in a live-in relationship before the actor's death on June 14. Sushant's father has accused Rhea of taking money from his son and also threatening to disclose his medical reports to the media. Sushant's family had also accused her of keeping him away from them.

The case was transferred to the CBI from the state police on August 7.