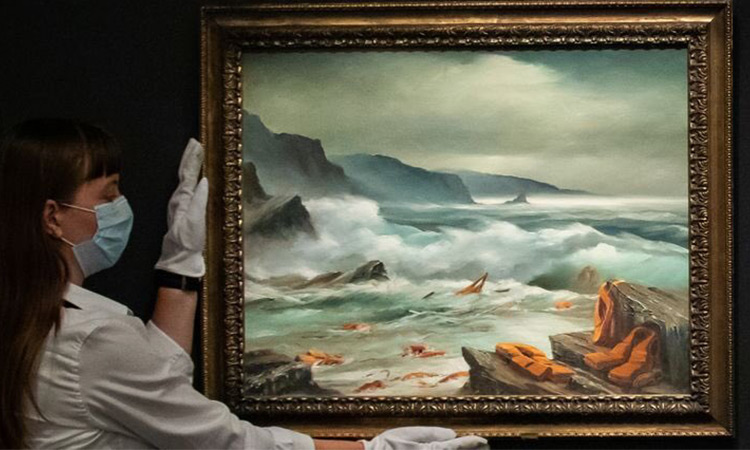 Banksy has donated a triptych of paintings referencing the European refugee crisis to a charity auction, which will raise money for a hospital in Bethlehem.

Originally created for Banksy’s Walled Off hotel in Bethlehem – where they have been on display since its opening – the paintings add abandoned life jackets and buoys to 19th Century-style seascapes.

The triptych will appear in Sotheby’s Rembrant to Richter evening sale on 28 July.

Alex Branczik, Sotheby's head of contemporary art for Europe, said: “In Mediterranean Sea View 2017, Banksy corrupts three found oil paintings with his own witty reworkings to create something that, while posing as a 19th-century seascape, spotlights one of the burning issues of the 21st century.

“In Rembrandt to Richter, this triptych hangs in Sotheby's galleries alongside works by some of history's greatest landscape painters, including Bellotto, Van Goyen and Turner.

“Banksy's work, however, stands alone for its potent political message.”

Banksy's latest stunt in the UK involved spraying a London Underground train carriage with messages about the spread of coronavirus.

The Bristol artist uploaded footage captioned ”If you don’t mask – you don’t get” to social media last week, which showed him spray-painting a Circle line train with stencilled depictions of his signature rats.

One creature appeared to be sneezing pale blue droplets of virus across a carriage window, while one struggled under a face mask. Another used the protective gear as a parachute.

Hours later, however, TfL announced that the artwork was removed “some days ago due to our strict anti-graffiti policy”. A Tfl spokesperson said Banksy was welcome to recreate his message “in a suitable location”.

“We appreciate the sentiment of encouraging people to wear face coverings, which the vast majority of customers on our transport network are doing,” the spokesperson said.