‘Catch and Kill,’ and four more new paperbacks to pick up - GulfToday

‘Catch and Kill,’ and four more new paperbacks to pick up 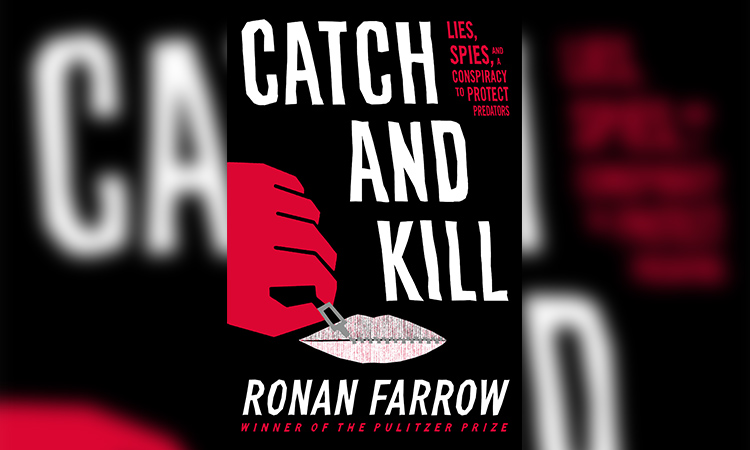 "Catch and Kill: Lies, Spies, and a Conspiracy to Protect Predators" by Ronan Farrow. TNS

Summer’s officially upon us; summer reading can officially begin. Here are six highly recommended, brand-new paperbacks, should you be in need.

“Exhalation: Stories” by Ted Chiang. This second collection of short works from author Chiang (his previous book was “Stories of Your Life and Others,” which included the story on which the film “Arrival” was based) made numerous best-of-the-year lists in 2019, among them the New York Times’ and Barack Obama’s. Calling the stories “deeply beautiful,” the Times reviewer wrote, “Each thoughtful, elegantly crafted story poses a philosophical question; Chiang curates all nine into a conversation that comes full circle, after having traversed remarkable terrain.”

“The Confessions of Frannie Langton” by Sara Collins. Collins’ acclaimed debut novel begins in a 19th-century prison, where a Black woman, formerly enslaved on a Jamaican plantation, is being held for a murder she can’t remember committing. “Between (Collins’) historical research, Frannie’s voice and a plot that never slows to a walk, the novel pulls the gothic into new territory and links it back to its origins,” wrote a reviewer in The Guardian, noting that Frannie, the central character, “is an extreme version of Jane Eyre. She is a powerless child brought up horribly in a horrible place, and her voice thunders in exactly the same way.”

“Catch and Kill: Lies, Spies, and a Conspiracy to Protect Predators” by Ronan Farrow “She Said: Breaking the Harassment Story That Helped Ignite a Movement” by Jodi Kantor and Megan Twohey. These two books both comprise reporting that shared the 2018 Pulitzer Prize for public service. In its citation, the Pulitzer committee called the work of Farrow, Kantor and Twohey “explosive, impactful journalism that exposed powerful and wealthy sexual predators, including allegations against one of Hollywood’s most influential producers, bringing them to account for long-suppressed allegations of coercion, brutality and victim silencing, thus spurring a worldwide reckoning about sexual abuse of women.”

“Lady in the Lake” by Laura Lippman. Lippman, author of numerous works of crime fiction, is very, very good at noir; here, with a title that nods to Raymond Chandler, she employs more than a dozen different narrators to tell the story of a young woman found dead in a park fountain in 1960s Baltimore, and a bored young wife-turned-crime-journalist who’s determined to figure out what happened to her. I devoured this book when it came out last summer; it’s every bit as much a page turner as her previous noir, “Sunburn,” and that’s no small praise.

“The Nickel Boys” by Colson Whitehead. Another Pulitzer Prize winner (to go with the Pulitzer for his previous novel, “The Underground Railroad”), Whitehead’s latest novel is inspired by true events: a legacy of horrific crimes of abuse in a now-shuttered boys’ reformatory school in Florida. The book is “in many ways a continuation of his reassessment of African American history,” wrote a Washington Post reviewer. “But ‘The Nickel Boys’ is no mere sequel. Despite its focus on a subsequent chapter of Black experience, it’s a surprisingly different kind of novel. The linguistic antics that have long dazzled Whitehead’s readers have been set aside here for a style that feels restrained and transparent.” Calling it “a deeply troubling novel, the reviewer notes that it “shreds our easy confidence in the triumph of goodness and leaves in its place a hard and bitter truth about the ongoing American experiment.”