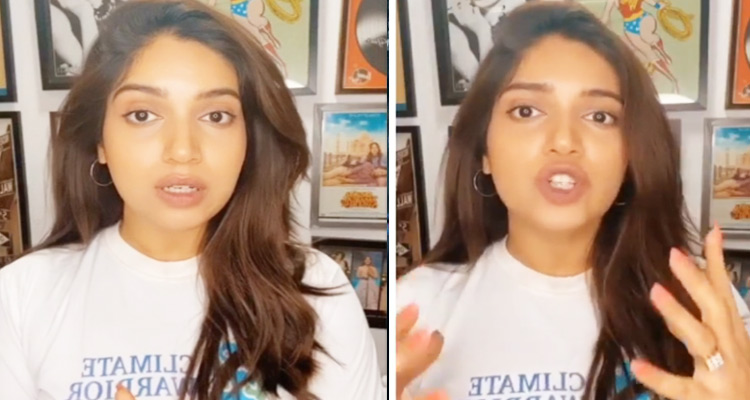 Combo photo shows Bhumi Pednekar in her video regarding her campaign.

Amitabh Bachchan and Akshay Kumar have joined Bhumi Pednekar's inititive to spread awareness about climate change and the need to protect the environment.

"Climate Change is upon us, is real. Stand up, do your bit protect Mother Nature .. On World Environment Day, my #OneWishForTheEarth pledge to be climate conscious, create awareness within families & communities. Every minute counts, be a #ClimateWarrior. @bhumipednekar," Amitabh Bachchan tweeted on Tuesday tagging the actress, whose One Wish For The Earth campaign seeks to fight for the environment.

Bhumi Pednekar took to Instagram to thank the veteran actor for taking part in the campaign.

She wrote: "Thank you so much @amitabhbachchan Sir for supporting us, spreading the message and telling us your #OneWishForTheEarth. It will inspire many to be more climate positive. Climate consciousness and awareness is the first & most important step for us! We will and can, together, make a difference. #ClimateWarrior." 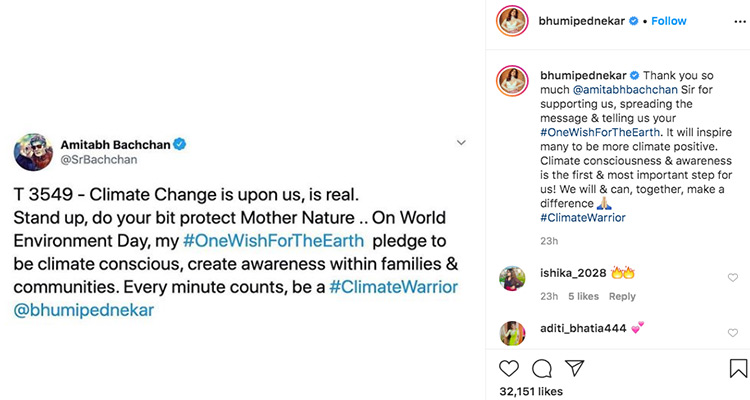 In a separate Instagram post, Bhumi shared a video where Akshay Kumar speaks about climate change. In the video, Akshay says: "Our beautiful planet that has sustained us now needs us to protect it more than ever. During this time, we as a community must tread carefully and act immediately.

A lot of damage has been done and climate change is a grave reality that all of us are facing. Today the one wish that I have is that we all work towards rebuilding mother nature by the simplest act of planting trees.

I consider this to be one of the most basic and efficient deeds that we can all excercise individually and also urge others to do so. So guys, let us all do our bit to heal and rebuild the only planet we have. So join me and become a climate warrior. " 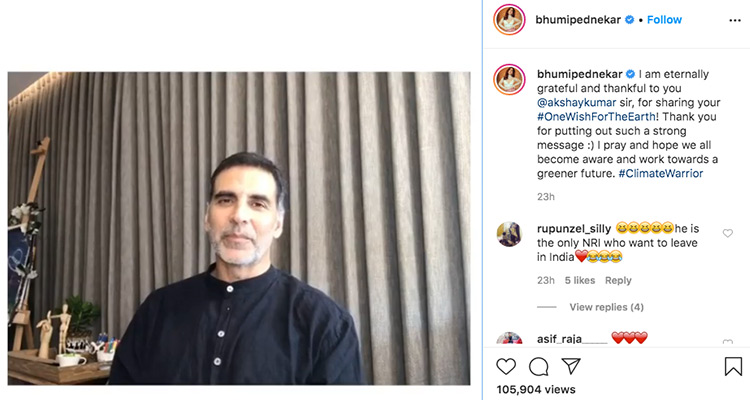 "I am eternally grateful and thankful to you @akshaykumar sir, for sharing your #OneWishForTheEarth! Thank you for putting out such a strong message :) I pray and hope we all become aware and work towards a greener future. #ClimateWarrior," wrote Bhumi Pednekar for her "Toilet: Ek Prem Katha" co-star.

For World Environment Day which falls on June 5, Climate Warrior, an initiative by Bhumi Pednekar is starting a small campaign -- One Wish For The Earth. The campaign endeavours to get Bollywood personalities to share "one wish they have for the earth".