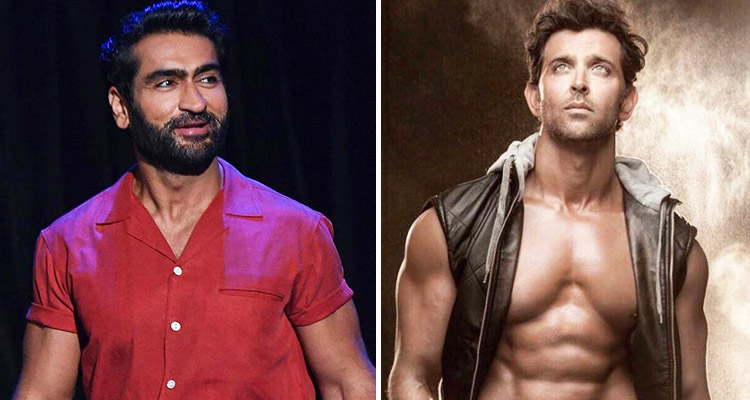 Bollywood star Hritihik Roshan has been inspiration to so many not just for his impeccably chiselled physique and extremely handsome looks – he is like a Greek deity – but also for his perfection in every performance.

In Marvel's "The Eternals", Nanjiani will play Kingo, a cosmic being living on Earth. His secret identity would be of a big Bollywood star.

Nanjiani stunned the world when he unveiled his new look in 2019 for "The Eternals". Now, he has revealed that Hrithik was a big inspiration in his fitness journey.

In Men's Health's April cover story, the actor said that he wanted Kingo to be Bollywood Bruce Willis and Marvel's John McClane.

"I was like, 'How can a character crack wise but still have tension, and not make it fee; like you're making fun of the whole thing?'" Nanjiani said.

This time, he had a Bollywood inspiration.

"I went to my trainer and said, 'I want to look like this guy'," said Nanjiani.

"This guy" was Hrithik.

The physical transformation wasn't easy. Nanjiani struggled with body dysmorphia after a new diet and exercise regime gave him an entirely new physique.

"I don't want to discount people who genuinely have debilitating body issues. I don't have that. But I did start getting some body dysmorphia. I'd look in the mirror and I'd see my abs - and when I looked again, they would fade. I would just see the flaws," he said.

However, once he went public with his new body, Nanjiani found it really helpful to see the reaction from his fans on social media.

"When I saw that reaction was when I was like, 'Okay, I clearly don't see what's actually there. It's something I'm trying to be aware of and be better at, because that's not a good way to be. You want to be easy on yourself," he said.

Director Chloe Zhao will be bringing the world of the Jack Kirby-created comic, which debuted in July 1976, alive. It is about super-powered beings The Celestials and their villainous adversaries The Deviants in a war set millions of years ago.